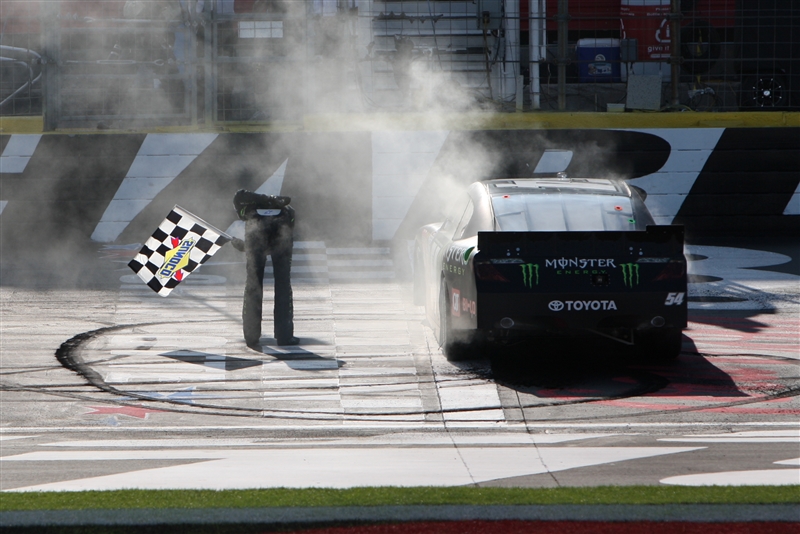 CONCORD, NC – Forty-one years ago, the British navy sank the famous, dominant Bismark submarine. On Saturday, Kyle Busch played the role of the Bismark, but no one in the field of the 32nd History 300 was able to sink Busch. It was Busch who was making history at Charlotte Motor Speedway. Busch enter the day with more career Nationwide wins than any other driver and Saturday, he added his 57th career win. Busch’s Monster Energy Toyota led 186 of the 200 laps and the win moved him ahead of Mark Martin as the all-time winningest driver at Charlotte Motor Speedway.

Busch was really never challenged throughout the race.  A series of late caution flags was the biggest challenge he had to overcome, each time, holding off race runner-up Kasey Kahne. It appeared that Kahne’s Great Clips Chevrolet got stronger as the race went on and appeared to be the only one had anything for Busch at the end. Sprint Cup regulars, Joey Logano and Kevin Harvick were third and fifth respectively.

Allgaier was the only driver in the top five of points who was able to cut into Smith’s lead today. Smith increased his points lead over Sam Hornish Jr by one point and will head to Dover with a 29 point lead. Hornish finished twelfth. Elliot Sadler was 13th and Brian Vickers was eleventh and remains in fifth in points, 49 behind Smith.