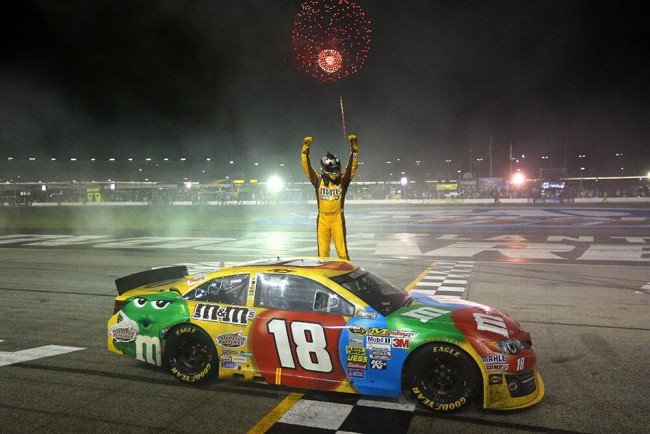 At this time one year ago, Kyle Busch’s Chase chances looked bleak.

Needing a win to secure a wildcard birth, Busch finished a disappointing 16th at the track where his lone win of the 2012 season came earlier in the year.

Looking to clinch a birth in the Chase, Busch won Sunday’s night’s AdvoCare 500 after leading the final 36 laps of the race.

“Heck-of-a-lot different than 365 days ago, I’ll tell you that much,” Busch said about clinching his place in the 2013 Chase for the Sprint Cup.

“I can’t say enough about this team. Their work tonight definitely, definitely helped me out a lot.”

The No.18 of Busch started the race in ninth and ran inside the top-half of the field throughout the entire race. However, he was never a factor for the win until late.

“I wasn’t happy with the race car at all in the beginning of the race,” Busch said. “Dave [Rogers, crew chief] and all the guys made some really good calls and made some good adjustments to get us back up front.”

Busch took the lead for the first and only time after the final round of pit stops after his crew gave him the top-spot heading into the final laps of the night to grab his fourth win of the season and the 28th of his Sprint Cup career.

“My boys, my boys on pit road. That’s the same group since 2008 [the year Busch joined Joe Gibbs Racing],” Busch said. “They’re amazing. I love those guys, I’d do anything for them.”

While Busch won the race, second-place finisher, Joey Logano, may have had the best car all night.

Leading a race-high seven times for 78 laps, Logano’s demise at the end of the race was the short dash to the finish as his car was suited best for the long, green-flag runs that were common at the midpoint of the race.

“Big picture it’s great,” Logano said about his night after he moved to eighth in the point standings. “I just feel like we had the race-winning Ford here..it just took seven or eight laps to get going.

“When I restarted third behind Kyle, I didn’t give myself enough room when he spun his tires. I got pinched and the 56 put me three-wide and I was in trouble at that point. To go back to sixth and have to work my way all the way back up…..I just wish there were five or six more laps.”

Series points leader, Jimmie Johnson, had yet another bad race, continuing his rough stretch of races over recent weeks.

On an early-race restart, Johnson was slowed after Jeff Gordon, who was leading the outside lane in which Johnson restarted, didn’t get up to speed, causing a chain-reaction crash which collected two of his Hendrick Motorsports teammates; Johnson and Kasey Kahne.

Johnson would finish the night 28th, while Kahne would clinch at least a wildcard birth in the Chase after finishing 36th.

Kyle Busch, Kevin Harvick, Carl Edwards, Matt Kenseth, and Kahne each clinched their spots in the Chase for the 2013 Sprint Cup championship.

The rest of the Chase field will be decided in next Saturday night’s race at Richmond International Raceway. The race can be seen on ABC.