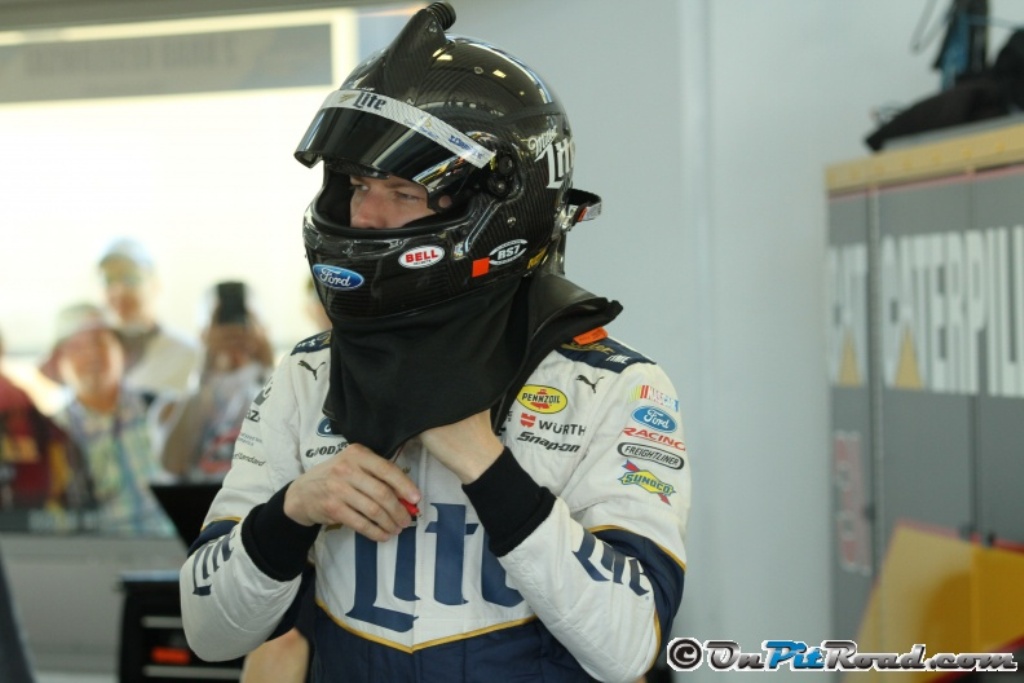 Brad Keselowski enters the Chase for the NASCAR Sprint Cup as the ninth seed after his win at Auto Club Speedway earlier this year.  Keselowski, the defending winner of this weekend’s Chase opener at Chicagoland Speedway, held a Q&A session during a break in testing today at Kansas Speedway.

BRAD KESELOWSKI – No. 2 Miller Lite Ford Fusion – YOU WON THE CHASE OPENER LAST YEAR.  WHAT’S IT LIKE WINNING EARLY IN THE CHASE?  “Yeah, that would certainly be very nice to get a win at the start of every round.  Certainly someone has to win, so why not let it be us?  I think from that perspective you really only have two choices – you either have to win or be consistent.  In a perfect world, you’d do both to make your way to Homestead and, of course, you’re gonna have to win there.  We certainly had a great start last year, like you said, winning the first race, but when we come here to Kansas the points are reset.  Nobody cares what you did even a week ago.  You’ve got to make it happen here.”

DO YOU APPROACH THIS YEAR’S CHASE FORMAT ANY DIFFERENTLY FROM LAST YEAR?  “I haven’t really thought about it that way, no.  I felt like we were in great shape last year, but we had two pretty major setbacks with Kansas, where we blew a tire.  We were able to kind of connect the Hail Mary pass at Talladega to make it to the next bracket and then, sure enough, we went to Martinsville and broke a rear gear in the car and played from behind and didn’t quite connect on the Hail Mary at Texas.  You don’t want to live and die by that, and I think the lesson learned there is you just can’t have failures.  Whether it’s driver or car, you can’t have failures without being able to connect on a win, and although we were close, we didn’t quite break through.  I don’t know if that’s really a lesson, per se, I think that’s something we probably already knew and just didn’t execute.”

SO YOU NEED TO BE AGGRESSIVE IF YOU DIG YOURSELF AN EARLY HOLE, BUT IF YOU START WELL IN THE FIRST COUPLE RACES, THEN YOU CAN BE MORE CONSERVATIVE?  “You can make it all the way to Homestead without winning a race, that’s for sure.  There’s some merit to a conservative approach.  It’s not one that I particularly enjoy or wish to play a role in, but I’m guessing someone will and they’ll probably get there – you know they will.  It’s simple math.  They’ll make their way to Homestead without winning, so that’s part of it, too.”

WOULD YOU RATHER THE TEST CONDITIONS BE AS CLOSE AS IT WILL BE FOR THE RACE NEXT MONTH OR DO YOU LIKE THE TEMPERATURE BEING HOTTER AND WIND BLOWING STRONGER THAN YOU MIGHT SEE IN OCTOBER?  “You always want it to be perfect, but we have plenty of stuff to try here that doesn’t require perfect conditions.  We’re happy more so just to be on the track.  We’ll take that and run with it.”

WHAT’S THE PRESSURE LIKE KNOWING YOU HAVE TO WIN THAT THIRD RACE IN ORDER TO ADVANCE? IS IT ANY DIFFERENT THAN WHAT YOU FACE EVERY WEEKEND?  “It gives you a feel like you’re at a marquee event.  I’ve talked quite a bit to the extra pressure you feel with the marquee races like Daytona, with marquee races like the Southern 500 or the Coca-Cola 600.  So those races, I think, you do put a little bit of extra pressure on yourself and when you’re in that kind of elimination race and your neck has the noose around it, it certainly feels like those races all over again and that’s not a bad thing.”

HAVE YOU FELT THE DRIVE FOR ANOTHER CHAMPIONSHIP CHANGE FROM 2013 TO TODAY OR IS IT THE SAME?  “I think it might mean something different to me now than what it may have meant earlier in my career, but I don’t see a difference in drive personally.  I feel like in a lot of ways we’ve grown and I’ve grown to be a better team than what we probably were in 2012, but so have a lot of others.  The bar is continually raised.  If you put the best team from 10 years ago and put them against the best team from now, they would get crushed.  That’s part of how this sport evolves and a lot of it is just trying to evolve at a better rate than anyone else.  So from that standpoint I think we have evolved and I feel like we’re a really good team.  We haven’t necessarily got the results that we’re looking for with respect to laps led, wins, top-5s, but our consistency this year has been as good if not better than any other year, and our top-10 percentage is slightly better, so I think that’s probably where I’d generate that conclusion from.  As far as the drive to get it done, I probably feel like the format itself changed some of that for probably everyone, knowing you can get a win early in the season and kind of make it in.  I think it’s natural somewhat to take deep breaths in the middle of the year because you can.  But I wouldn’t mistake that for less drive to win the championship as much as it is more of a carefree attitude to enjoy what you do as a professional in sports.  The drive to win the championship, though, to me, is higher than it’s ever been.  To win a second championship, to me, would be a huge career mark in the sense that I think Mark Martin probably summed it up the best as anyone, somewhere about a dozen years ago when I was reading a quote from him about winning your second race.  When you win your first race, there’s always someone that can stand up and say, ‘Anyone can win one race,’ but it’s when you win multiple races that you start to really grow confidence in who you are and happiness and I think find peace with what you’ve done and feeling justified in it.  For me, I feel that way about winning a second championship.  I think that would perhaps more solidify, not just in other peoples’ minds, where our team is, but in my own and that would be a tremendous feeling for me personally, considering where we’ve come from and how far we’ve come.  So I think we have that opportunity and I’m very driven to make it happen.  I don’t want to miss this moment because we’re there and we have a great team.  We have fast cars.  We just need to execute and not have any bad luck.”

HOW HAS YOUR PERSPECTIVE CHANGED BEING A FATHER AND SOME OF THE THINGS YOU’VE GONE THROUGH?  “I enjoy sharing the success we have together as a team with everyone on the 2 crew, but from a family perspective I think it’s always different to share success with your family than it is your team.  Really, the only perspective change that I could share in that light is to be able to participate in success as a family.  It’s even more meaningful.  It’s just the cherry on top, I guess.  That’s kind of how I feel about it.”

IS THE CHASE A BREATH OF FRESH AIR IN SOME WAYS?  “Yes and no.  I think as a team or driver, kind of like I was alluding to earlier, it’s hard to find calm in the Chase.  Like I said, we entered here at Kansas last year leading the points having won five races and won the first bracket by all intents and purposes with wins and respect to points, and we parked in the first garage stall, but the point sheet said first through twelfth all had the same amount of points.  Essentially, when you come to Kansas that second round starts and everything you’ve done doesn’t really mean anything other than qualifying to get here.  You have re-earn your way and, in that sense, there’s not a lot of calm to be found.”

DO YOU LIKE THE NEW FORMAT AND DID YOU LEARN ANYTHING GOING THROUGH IT LAST YEAR?  “The format arrived to where it’s at with respect to growing the sport in a way that engages our fans, corporate sponsors, etc.  Really, I’m in favor of that.  That’s what I’m in favor of, I’m in favor of growing our sport, so as to whether I like it or not is, to me, directly proportionate to the response that we get from those entities.  That’s what I signed up for at least, so I would kind of defer to those metrics.  With respect to if I learned anything, I was kind of alluding to that earlier.  I think we knew it before, but maybe didn’t believe it, but, yeah, you can make it all the way to Homestead without winning a race.  You can be consistent and get all the way to the last round, but I don’t really care to participate in that manner.  I want to win races and that’s what it’s gonna take for me to be proud at the end of the day to be in Homestead and potentially raise a championship trophy is to win races, so that’s what I’m gonna try to do.”