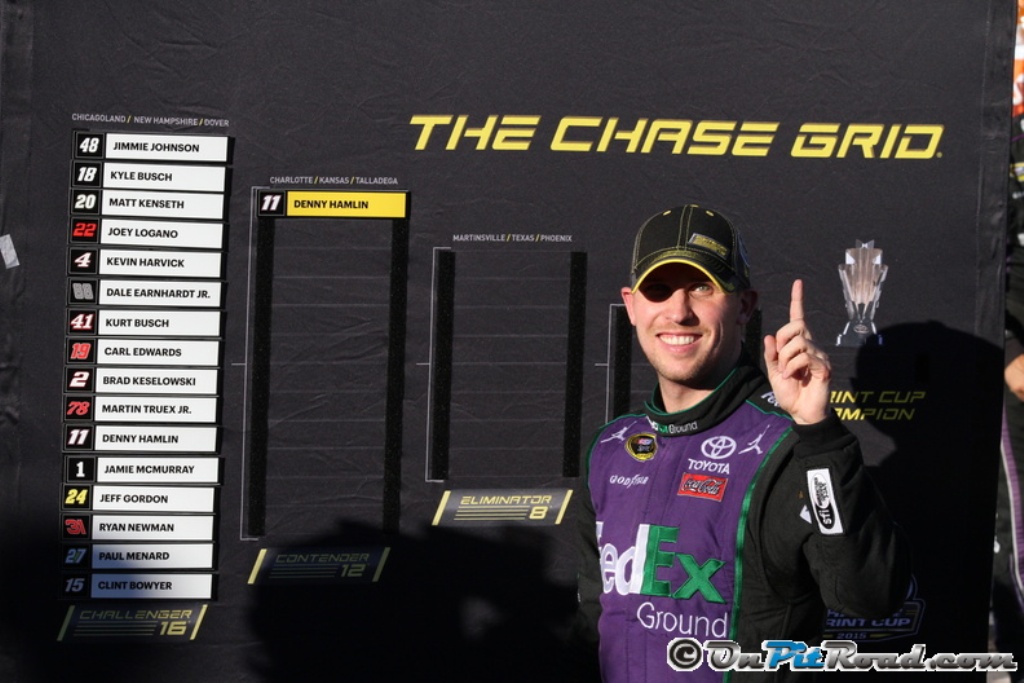 Entering the Chase for the Championship with eight victories in the last 11 races, it was no secret that Joe Gibbs Racing was considered the favourite to go all the way and bring him Toyota’s first championship. After all, all four of JGR’s drivers qualified – Denny Hamlin, Kyle Busch, Carl Edwards and Matt Kenseth. So it marked no surprise that when the race was over on Sunday afternoon, JGR placed their drivers first, second, sixth and 10th in the running order.

“For us, I appreciate everybody we got back home,” car owner Joe Gibbs said of the effort. “Everybody has heard me say that.  We have a lot of people at the race shop.  I wish they were here to celebrate in the winner’s circle with us, but they’re not. But the whole team back there, everybody that works on our cars, front office, J.D. (Gibbs), everybody back there, I wish they could be here with us because they deserve to be here to celebrate.

“I thought today was a total team effort.  We had everything go against us really.  11 car had to start in the back because of our qualifying speed.  We turn around and spun the car back there.  We go down a lap.  Fought hard all day to get that back.  So it was just one thing after another.”

Dave Rogers, Hamlin’s crew chief, seconded those sentiments, saying that having all four cars in the top-10 is “a testament to the speed”. He added that he was impressed with everybody’s ability to stay composed through the adversity they experienced along the way. Notably, the day didn’t go smoothly for the organization as both Hamlin and Edwards had to fight back from the back of the field to get their finishes.

Hamlin would go around on lap two, though was able to get the lucky dog and worked his way back to the front, scoring the victory with a late race three-wide pass on a restart.

“It feels great, obviously.  This is a great day for us.  We obviously came back from adversity and did a lot of great things throughout the day, with the exception of lap two,” Hamlin commented. “I tell you, it’s just amazing that we were able to come back the way we were and do the things that we were able to do.I knew we had a really fast car.  I didn’t think starting in the second row with old tires we were going to have a chance.  But the opportunity came in turn one to make a move, and we capitalized and our car took off.”

When the spin happened, the team stayed composed, with Roger telling Hamlin that he had a rocketship and would be able to get back to the front of the field. Rogers said in the media center that he truly believed in those words, based on what he saw in practice on Saturday.

“I think the minute you tell yourself you can’t win or you’re just trying to get a top 10, then that’s probably all you’re going to get,” he added. “The way Denny was moving up through traffic, I knew last year Brad won the race, he started in the mid 20s.  Denny finished sixth, I believe, and started 27th.  So I knew last year people came from deep in the field and contended for the win.  So I knew it was possible.

“And we spun because he was going.  He had a fast racecar and he was trying to make something happen and got in the back of slower cars.  So I knew he had speed.  I have a lot of faith in that driver.  He can do some crazy things.”

Hamlin, meanwhile, said that he had the number seven in his head, feeling that if they could get back to seventh, it would be a great comeback for them. He added that he was “very surprised to see us win it”.

Edwards, meanwhile, sped on pit road at lap 54. He was able to fight back, though, in the same fashion that Hamlin did en route to finishing second.

“I didn’t see in the front for a while, but looked like Kyle was fast.  He had a really fast car there for a long time.  That gave us a lot of hope.  We knew if we maybe we get our lap back, get back up there, we’d be all right.  I had a speeding penalty.  I set us back there,” he commented. “Overall we planned on the racetrack changing a lot.  I felt like my guys did a great job getting the car tuned in for the end.  I felt like all of us as a group at JGR worked great together this weekend.”

Out of the four Joe Gibbs Racing cars, it appeared that Matt Kenseth had the worst car, struggling with the handling throughout. Though as a result of strategy and a strong late-race restart, he would cross the line in sixth.

“ We really struggled,” Kenseth admitted post-race. “We had probably a 15th-place car at best and barely hung onto the lead lap all day and got the right line on the restart.  Jason made some good adjustments, guys never quit.  We were in the right line at the restart.  Everybody got bottled up.  I think passed seven or eight of them in the first corner, another two or three the next set of corners.

“Somehow we wound up fifth.  We definitely finished way better than we deserved today.  But that’s what you’ve have to do in these things, you have to try to take your days and try to make them the best you can. Happy for Denny.  Been a few months since he’s been in Victory Lane.  All our cars had really good finishes today, so that’s important side of it.”

In the early stages, it looked as though Kyle Busch would bring home the victory for the organization, leading a good sizable chunk of the race through the middle. He would finish 10th, though, not able to make it through the traffic on the late-race restart after pitting for four tires.

While it’s just the first race of the Chase, it certainly not only start the organization off on a solid note, but also adds to the confidence going into the next nine.

“We find ourself, no matter what year we’ve had, in an advantage over everyone right now.  We’re very proud of that,” Hamlin said. “We entered this Chase with as much momentum as we’ve ever had.  Maybe not race wins, but certainly top-five finishes.  We’ve been battling for race wins here in the last two months.  Even though my teammates have been winning, we’ve been like the second-best car.  There’s four of us.  We’ve been right there, just haven’t had things work out for us.

“We had a similar restart like this at the end of Darlington.  Unfortunately it was a teammate, so I had to treat it slightly different.  But I can tell you that things worked out for us, and obviously this is the momentum we need to continue on.”