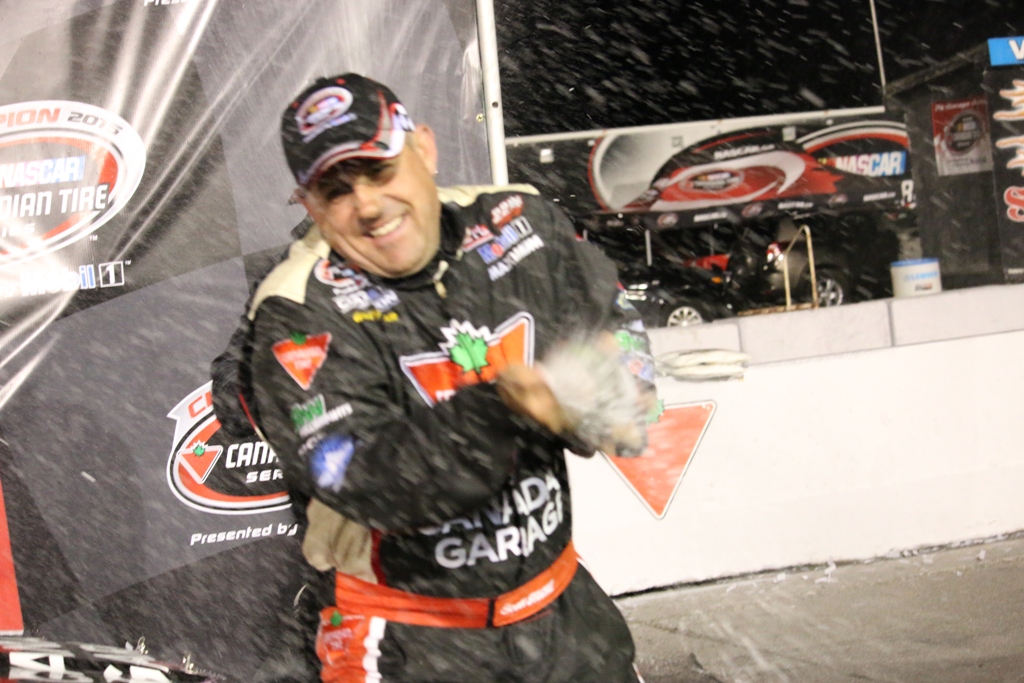 While Jason Hathaway dominated the Pinty’s 250 at Kawartha Speedway, Scott Steckly did what he needed to do secure the championship. The driver of the No. 22 Canadian Tire Dodge crossed the finish line in the second spot, scoring the NASCAR Canadian Tire Series Championship by four points over Hathaway.

“It was really uneventful, which was really good,” Steckly said. “The car was good right off the start. We started getting a little tight on the long run and Jason got by us on a restart. We sort of then ran in second behind him and didn’t force the issue. We knew we didn’t have to pass him or anything, but follow him and that’s what we did. There were no challenges from anyone else so we sort of ran there and played it smart.”

After setting a new track record in qualifying, Steckly led the first 47 laps of the race, before falling back to second on a restart behind Hathaway. He then continued to run second for the remainder of the event. Steckly said after the race that “there was no reason to chance” passing Hathaway and having something happen as “second is better than wrecking”.

Through the back half of the race, there was a couple of chances with cautions and restarts, which Steckly said made it a little more nerve-wracking as when you’re in the midst of a long green flag run and focused on the race, you’re “not thinking about what is happening”.

” I would’ve preferred if it had more green flag runs, but the car was good enough that the cautions didn’t hurt us very much,” he commented.

For Steckly, this year’s championship with three wins, seven top-fives and 10 top-10s in 11 race marks his fourth series championship.

“It’s amazing,” he said. “People don’t realize how much work goes into it by the crews and how much time it take away from family and friends, and how much the whole team sacrifices, and to be able to do it four times is amazing.”

With the championship in hand, the veteran isn’t positive of his plans for next year. The majority of his regular sponsors plan to remain, but the primary sponsor – Canadian Tire – has announced that they will not be sponsoring the series in 2016 and beyond, or Steckly.

“It doesn’t look like Canadian Tire will be back,” he mentioned. “It’s been a great seven years with them. We had an amazing relationship and they’ve done a lot of great stuff for us, and we’ve met a lot of great store owners and customers.”

With the primary sponsor up in the air going into the season, the question that many will be asking over the next couple of month – will Steckly be back in 2016 to defend his title?