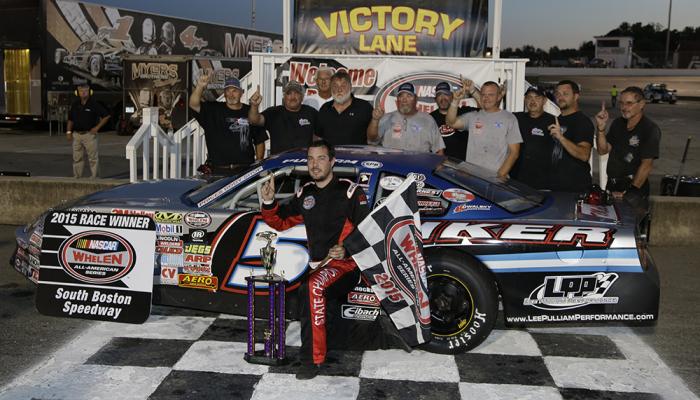 DAYTONA BEACH, Fla. — It’s fitting Lee Pulliam took the call informing he was once again a national champion while on a lunch break during a Late Model test day at a race track.

The 2015 itinerary for the Semora, North Carolina, native resembles the 1970s racers chasing national points all over the map. Pulliam ran 51 races at seven different tracks – winning at six of them – in four different states over a nine-month period.

When he wasn’t at a race track, he was in his race shop.

The payoff came Wednesday, when the 27-year-old who now resides in Alton, Virginia, was officially named the 2015 NASCAR Whelen All-American Series champion. It is the third national title in four years.

“We ran everywhere we could possibly run,” said Pulliam, who finished with 29 wins, 46 top fives and 48 top 10s in 51 races. “We ran at places we’d never been, and won at places I had never won. It’s really neat to see all the hard work pay off. It was definitely the hardest one we’ve ever won.”

““We would like to congratulate Lee Pulliam on his 2015 national championship season,” said Silbermann. “Lee embodies the spirit and the drive for excellence that is the cornerstone of the NASCAR and particularly the NASCAR Whelen All-American Series. He has been a tremendous ambassador for the series in his past championship seasons and we look forward to honoring him and all of the great racers across North America in December.”

Pulliam will receive the championship trophy and his third ring on the stage at the Charlotte Convention Center / NASCAR Hall of Fame on Friday, Dec. 11. He will be honored along with the track champions, U.S. state and Canadian province champions, and top award winners from throughout the NASCAR Whelen All-American Series.

Pulliam’s single-season win total is ninth all-time and marked the fourth year he’s won more than 20 races in a season. Over the last five seasons, he has won 120 races in 210 starts. He finished second (2014) and third (2011) in the years he didn’t win the national championship.

While Pulliam continued with the asphalt Late Model dominance atop the national standings, the top five and the closeness of the championship points battle showcased the wide breadth of race cars and geographic talent in the series.

“It’s been an unbelievable season,” said Tillison. “This puts the icing on the cake for the season.”

As a first-year NASCAR Whelen All-American Series Division I license holder, 41-year-old from Wellston, Oklahoma, also earned the national Rookie of the Year presented by Jostens. He had 15 wins, 25 top fives and 25 top 10s in 29 starts, won the track title at Salina and the Oklahoma championship.

“That’s definitely something we’ll be able to put up on the mantle there and brag about for a long time,” said Tillison, who added that the format of competing and following drivers from other areas of the United States and Canada, added to the experience. “I thought that was one of the neatest things about chasing national points. People in Canada know about Flint Creek and Salina. And people in Oklahoma know about Motor Mile and Stafford. It drives you to understanding what’s going on in other places. It really was an amazing experience.”

Thomas Tillison Jr. won the track championship at Salinas Highbanks Speedway in Oklahoma and the national Rookie of the Year presented by Jostens. Mayes County Pictures

Holdaway won his first track title at Sunset and captured the Ontario championship on the strength of 12 wins, 21 top fives and 21 top 10s in 22 races. He overcame an opening night fuel issue that caused him to drop out of the track’s first feature and miss starting the second.

The 24 year-old Orillia, Ontario, native rallied to become the top finishing Canadian driver in the history of the NASCAR Whelen All-American Series. The previous highest finishing driver was Steve Robblee, who was sixth in 2009 while racing at Ontario’s Delaware Speedway.

“At the start of the year, our goal was to win the track title and try to win the province championship,” said Holdaway. “When you sit back and look at all the drivers who made it into the top 10, it’s a pretty big accomplishment.

“And to be the first Canadian to finish in the top five is something that’s pretty cool and something they’re never going to be able to take away.”

NASCAR Whelen All-American Series Division I drivers are ranked by their best 18 NASCAR points finishes in series-sanctioned events. Drivers receive two points for every car they finish ahead of – up to 18 cars – and three points for a win, with an additional two points available if the driver starts 10th or lower.

Zacharias had 15 wins, 27 top fives and 28 top 10s in 30 races running primarily at New York’s Chemung Speedrome and Holland Motorsports Complex. He won the Modified title at Chemung and was also the New York champion. Zacharias also made a handful of late season starts at Connecticut’s New London-Waterford Speedbowl in an attempt to make up the final few points on Holdaway, but fell six-points shy of the final podium spot

Rocco rolled to 11 wins, 34 top fives and 41 top 10s in 48 starts at Connecticut’s Thompson Speedway Motorsport Park, Stafford Motor Speedway and New London-Waterford. He won his eighth straight Connecticut crown and finished in the top five in the national standings for the ninth consecutive season.

Goede won the Minnesota championship and Von Dohren won the Pennsylvania title, while Bowling claimed the track championship at South Boston and finished second to Pulliam in the Virginia standings.

“It’s been a pretty amazing couple months,” said Pulliam, who started August third in national points behind Rocco and Preece. He pointed, though, to his win at the Hampton Heat at Langley as the turning point. “When we got the win, that was just a big fresh air for the team. I had never raced at that place before this year and we won. We just pulled down and focused real hard on getting our stuff better. And the last two months have been pretty amazing.”

Established in 1982, the NASCAR Whelen All-American Series is NASCAR’s national championship program for weekly short track auto racing. In all, 58 paved and dirt tracks throughout the United States and Canada participate.