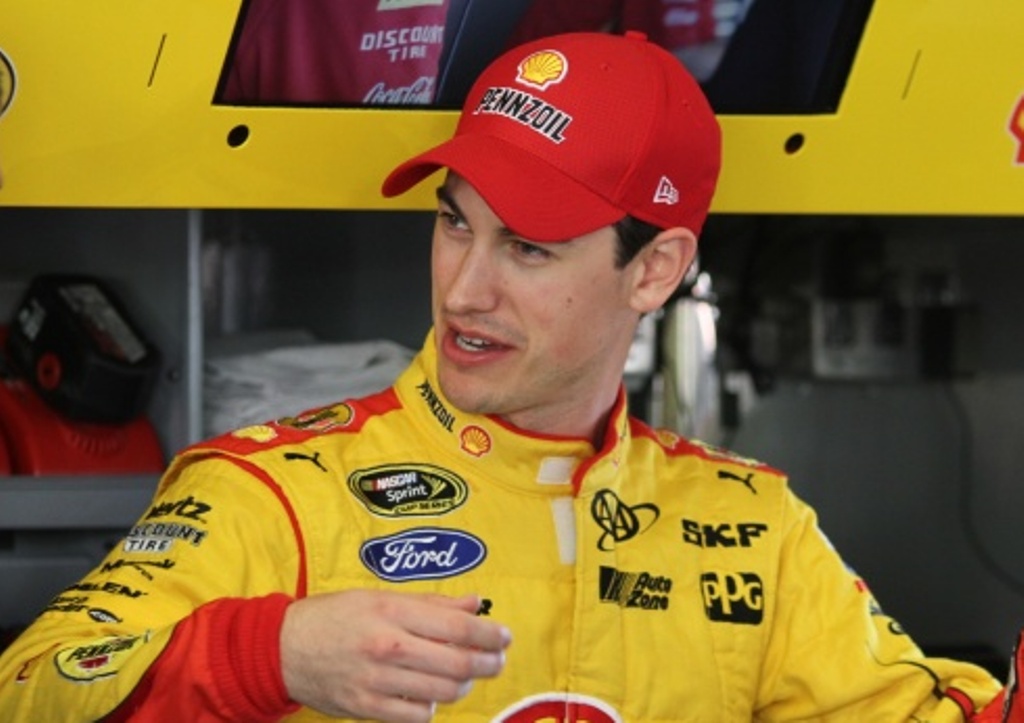 Joey Logano, driver of the No. 22 Shell/Pennzoil Ford Fusion, is the defending champion of this weekend’s race at New Hampshire Motor Speedway and a repeat win would guarantee advancement into the Contender’s Round of the Chase for the NASCAR Sprint Cup.  He visited the infield media center earlier today and talked about a number of topics.

JOEY LOGANO – No. 22 Shell/Pennzoil Ford Fusion – HOW IS YOUR CONFIDENCE GOING INTO THIS WEEKEND?  “I feel pretty good about it.  This has been a good race track for us the last couple of years.  Obviously, this is my home track so I talk about that a lot when I come up here, but I really want to win here again.  I feel like we’re in good position after last week.  We had a solid finish and that positioned ourselves pretty good to race fairly aggressive through this race and try to get a win like we did last year.”

JEFF GORDON BREAKS THE CONSECUTIVE STREAK RECORD THIS WEEKEND.  IF YOU GO THE NEXT 15+ YEARS YOU’LL BREAK IT.  CAN YOU DO IT?  “I’ve got a long ways to go (laughing).  Fifteen years.  Holy crap.  I’m only 25.  I guess I have a chance.  You never know what’s gonna happen or what life will bring you, but congrats to Jeff for what he’s accomplished.  I don’t think people should overlook that.  To start that many races consistently is unbelievable, so congrats to Jeff on that.  I have a long ways to go.  It’s not really on my radar yet, but at least I’m on track and we’ll see what happens (laughing).”

YOU’VE HAD SOME MOMENTS WITH KEVIN HARVICK IN THE PAST.  WHAT WAS YOUR REACTION TO THE INCIDENT WITH HIM AND JIMMIE LAST WEEK?  “I really don’t have much of a reaction to be honest with you.  I’m focused on my own thing.  It is what it is.  That’s what seems to happen in the Chase.  Emotions seem to get fired up pretty quick and I don’t really have a reaction.  I’m not surprised.  I’m not anything.  It is what it is.”

DO YOU LOOK AT WHERE OTHER DRIVERS ARE AT GOING INTO EACH RACE OF THE CHASE AS A WAY OF UNDERSTANDING HOW THEY MIGHT RACE?  “It’s smart to keep tabs on where everyone is at and what they have to do to get to the next round.  Do I think the 4 car has to win one of these next two races?  No, I don’t think that.  I think you can still get in by points, but you’d have to have two really good races.  If he can win, I expect him to be aggressive, but I would expect that before.  The way we’ve raced the whole season up to this point was racing with nothing to lose, so we’re kind of used to that a little bit.  Now there’s something to lose for some of us, but there are still some cars out there that have nothing to lose and we’ll go for it like we did before, so I wouldn’t expect anything different there.”

IF HARVICK WAS ELIMINATED IN THIS ROUND, YOU WOULD THINK IT WOULD BENEFIT THE REST OF THOSE WHO ADVANCE BECAUSE THAT’S A BIG THREAT YOU DON’T HAVE TO WORRY ABOUT.  WOULD THAT BE A BONUS?  “It’s the way this whole playoff Chase system works when you’re knocking out cars.  You want to knock out the fastest cars you can.  It’s not a bad thing.  Obviously, the 4 car is one of the fastest cars every week.  They led the points for most of the season, so you know they’ve got speed everywhere they go.  I wouldn’t consider them out at this point by no means.  They’re still a very strong team and they’ll be up there racing hard and trying to get to the next round, but if we are able to knock them out and able to keep them from winning a race and we focus on our own thing – that’s the main thing though, as long as we focus on what we need to do whatever happens throughout the rest of this Chase is what it is with everybody else.  We just have to make sure we get to Homestead, but if you look at the big picture obviously you want the fastest cars out because it gives you the best chance when you get to Homestead, but I’m not gonna change to do anything different out there.  I’ve still got to get myself there.  That’s priority one is getting our team to Homestead.”

YOUR THOUGHTS ON THE JOE GIBBS RACING STREAK RIGHT NOW?  “I feel like we’re right there with them.  Even last weekend in Chicago, I thought we had a very fast Shell/Pennzoil Ford that had speed in the car, ran up top-5 all day and had a legit shot at winning.  That last restart I felt like we were in position with our four tires and where we were starting, but when you’re racing against four cars that are very, very fast and they’re all pretty equally matched with speed, that’s what kind of makes them look like they’re the next level.  It’s not just one car that’s doing it.  It’s not two cars that are doing it.  It’s all of them, which is impressive.  You don’t see many teams that can put four cars together running fast ever, so that’s pretty impressive with what they’re doing there, and obviously I think they’re top-4 in points here right now.  They’re strong, but I don’t look at them as stronger than us.  They just have more numbers out there.  They have more cars and I feel like Team Penske is right where we need to be.  I think we’re really close.  I think we’re fighting with them every weekend for wins, so I don’t think we have to take a step back and say, ‘Oh my God, we’re doing something wrong.  They’re just so much faster than us.’  They’re not faster than us.  There are a lot of circumstances that obviously have to go just right to win these things just like anybody else does, and I feel like we have speed in our race cars so we’re not far off at all.”

NASCAR IS MEETING WITH TEAM MANAGERS LATER TODAY TO TALK ABOUT THE RULES PACKAGE FOR NEXT YEAR.  DO YOU LEAN ONE WAY OR THE OTHER AS TO WHAT YOU WOULD LIKE TO SEE IN 2016?  “I would say all of us would like to see the low downforce package.  I think everyone wants to see that for ’16.  I know the drivers want to be down that direction.  I’m sure you guys have watched the races and have formed your own opinions from it, but from my standpoint I thought the low downforce package put on the best racing.  I thought Darlington was one heckuva race and it’s really hard to have a good race there.  It’s a tough race track to put on a good race and it’s been quite a few years since we’ve seen a really good race at Darlington, and it was able to do that.  Kentucky once again was also a great race, so the two data points that we have from that low downforce package was really good, so I think all of us want to go that direction.  There’s obviously a lot of other questions that go along with that.  What tire do you match up with it?  And other little parts and pieces that have to go along with the package, but I think if you look at the big piece of the puzzle I think everyone wants to go that direction.  We’ll see where it goes.”

ARE YOU GOOD WITH THE CURRENT HORSEPOWER?  “When you take the downforce off you’re also taking a lot of drag off the car, so it makes you feel like you’ve got more horsepower again.  It gives you the feeling that the horsepower is almost back to last year before the tapered spacer.  It gives you that feeling just because you don’t have that aero drag that’s pulling you back so much.”

THE TOP LANE HERE ON STARTS AND RESTARTS IS OBVIOUSLY THE SUPERIOR LANE.  HOW DO YOU MAKE THE INSIDE LANE WORK AND HOW MUCH OF A CHALLENGE IS IT TO MAINTAIN OR GAIN ON A RESTART?  “I think the lanes are actually more equal here than you think.”

SIX OF THE SEVEN RESTARTS THE LEADER ON THE OUTSIDE MAINTAINED THE LEAD.  “That might just be for the front row, but as you go a little further back to the second, third, fourth row they seem a little bit more equal from the top to the bottom.  But the top lane typically has a good chance to restart well and for some reason have a little bit better momentum through turn one and be able to set yourself up good off of two.  What can you do?  Hopefully, we all just play by the rules of what NASCAR has laid out for us and hopefully NASCAR enforces that this week.  I think that’s what we’re all looking for as drivers is not to be able to lay back.  We want to be able to restart where we need to restart and let the control car as the leader be the control car and not the second-place car by laying back.”

DID IT FEEL DIFFERENT WHEN YOU GOT TO DIFFERENT STAGES IN THESE CHASE RACES LAST YEAR AND DO YOU THINK IT WILL BE THE SAME OR MORE INTENSE THIS YEAR?  “It does feel different because there’s a lot on the line, but it felt different last week in Chicago.  And as much as you try to make it feel like it was the rest of the season and nothing changes and you tell yourself that and you tell your team that, but something does change because it’s the playoffs.  It’s gonna get a little bit more intense and there’s a lot more on the line, so it’s gonna feel different and depending on your position after the first two races is going to decide what your intensity level is when you get to Dover or you get to an elimination race.  Like I said, hopefully we get through this race well and we can go through Dover and feel comfortable about what we’re doing there and not having much pressure, but it’s one race at a time.”