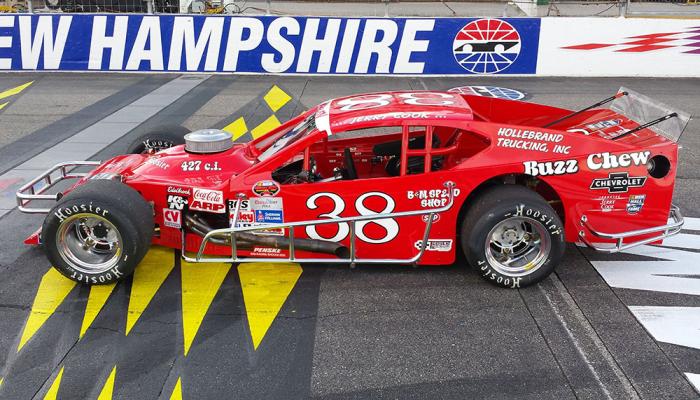 Piktat’s regular No. 88 black and blue Chevrolet has transformed into a red and white No. 38 as a tribute to NASCAR Hall of Fame-elect Jerry Cook for Saturday’s F.W. Webb 100. The throwback scheme features a red paint with white lettering and numbers outlined in black, and the look comes complete with Cook’s primary sponsors Hollebrand Trucking and B&M Speed Shop. The No. 88 team’s present day sponsor Buzz Chew Chevrolet is also feature on the car with a retro logo.

Although Cook had retired from competition by the time New Hampshire’s “Magic Mile” opened in 1990, the track is the most prominent venue the Whelen Modified Tour visits, providing a fitting place for the tribute to take place.

The selection of the Buzz Chew Motorsports team for this tribute opportunity was also apt. Pitkat is the defending winner of the F.W. Webb 100 and is just one point out of first in the 2015 championship race.

“This is a great honor to have Buzz Chew Racing and Woody Pitkat carry my colors and number at New Hampshire,” Cook said. “Being elected to the NASCAR Hall of Fame is as great as it gets. It’s out of this world for sure.”

Jerry Cook with one of the Pinto-bodied cars he used on his way to winning the 1971 NASCAR National Modified championship, the first of his six titles. Getty Images for NASCAR

Cook barnstormed his way up and down the East Coast chasing wins and points. He compiled 342 checkered flags in 1,474 starts and earned six NASCAR modified division national championships from 1971-77. Only six drivers in the history of NASCAR racing at all levels have more series titles than the Rome, New York, native.

“All of the racing they did, the accomplishments he had and the championships he won, it’s a huge honor for our team to be able to do this,” Pitkat said.

Cook often raced a handful of times a week, and Pitkat – who maintains an aggressive racing schedule himself by today’s standards – feels a bit of a kindship to the man his team is paying tribute to.

“I’m kind of in the same boat because I do a lot of racing myself,” Pitkat said. “I race four different cars – he was probably doing it with just one car back then – but it makes me feel good that I’m kind of doing the same thing he did.”

Cook will join former competitor and rival Evans, also from Rome, New York, as the only competitors from NASCAR’s weekly and regional touring division ranks to receive NASCAR Hall of Fame election.

“To me it’s a huge honor,” Pitkat said. “I remember a few years ago when Bobby [Santos] drove the Richie Evans tribute car and that was really cool.”

The NASCAR Hall of Fame Induction Ceremony is scheduled for Friday, Jan. 22, 2016, and will be broadcast on NBCSN and SiriusXM NASCAR Radio, live from Charlotte, North Carolina. Cook will be inducted alongside Bobby Isaac, Terry Labonte, O. Bruton Smith and Curtis Turner.

Jerry Cook reacts with his family after being the announcement that he will be one of five inducted into the NASCAR Hall of Fame in January. Getty Images for NASCAR