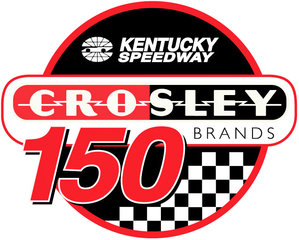 More than a year after competing in his last ARCA Racing Series presented by Menards event, Chris Windom hopped into the Lira Motorsports number 36 Ford Fusion for the Crosley Brands 150. After a rainy Friday night at Kentucky Speedway pushed the race to early Saturday afternoon, the open-wheel standout recorded an 8th place finish before heading to Eldora Speedway where he was scheduled to race Saturday night.
The 24-year-old racer, originally from Canton, Illinois, is primarily a USAC Sprint and Silver Crown competitor. Saturday was his seventh ARCA Series start, with his previous six races coming between 2011 and 2013. His 8th place finish marked his fifth top ten finish in the series.
Chris qualified in the 11th position for the race, just missing his 6th top ten ARCA Series starting spot. However, he quickly had his Momo / Ford Performance / TraqGear Ford Fusion inside the top ten once the green flag waved. He was running in 9th when a rain shower brought out an extended caution period between lap 40 and lap 57.
During the caution, Chris’s team opted to follow the pit strategy of the race leaders, staying out on the track until it became apparent that the rain would pass and racing would resume. He made his pit stop from the 4th position on lap 53. He rejoined the field in the 13th position, behind cars that had opted to pit earlier during the caution period.
“We rolled the dice on pit strategy thinking the rain wasn’t going to go stop as quick as it did,” Chris commented after the race. “It ended up not working in our favor, but sometimes you have to gamble when you’re trying to get a good finish – I was here to go for the win.”
Chris raced his way back into the top ten within 10 laps. He took over the 8th spot on lap 85, where he would remain until the checkered flag fell on the 100 lap event.
“I had a great time, and everyone on the team did a great job getting me as comfortable as possible on such short notice,” Chris said. “I really learned a lot from practice through the end of the race. I just want to thank Carlos and everyone on the team for giving me the opportunity, and for giving me a great race car to drive.”
Chris did eventually make it to Eldora Speedway Saturday night, where he drove his USAC National Sprint Car to a 9th place finish in the 30-lap Sprint Car A-Main. He then raced his USAC Silver Crown Car to a third place finish in the 50-lap Silver Crown A-Main.