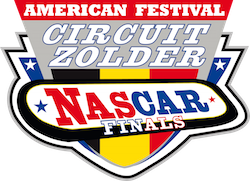 Titles On The Line In The Zolder Finals

It all comes down to the final event of the season! The October 3-4 Circuit Zolder Finals will be decisive in assigning Titles, Trophies and Cups in both the EuroNASCAR divisions with four exciting double-points 16-lap NASCAR races on the historic 4,011 Km Belgian track.

The ELITE 2 Division promises to deliver a weekend for the ages in Belgium thanks to a incredibly tight battle for the title. Three drivers – Philipp Lietz (#67 GDL Racing Ford Mustang), Salvador Tineo Arroyo (#51 CAAL Racing Toyota Camry) and Thomas Ferrando (#37 Knauf Racing Team Ford Mustang)  –  are separated by a mere 10 points and two more, Gianmarco Ercoli (#9 Double T by MRT Nocentini Chevrolet Camaro) and Stienes Longin (#11 PK Carsport Chevrolet SS) are inside a 26 points gap. That’s not all though, because Ulysse Delsaux (#3 Tepac RDV Compétition Ford Mustang) is just 49 behind from the leader and Florian Renauer (#5 Dexwet Renauer Team Ford Mustang) 15 lengths further back. Belgian Eric De Doncker (#98 Insulco Motorsport 98 Ford Mustang) is also inside the 100 points gap at minus 90 from the lead.

The title hunt is totally open also in the Teams Championship, with Lietz’s #67 GDL Racing Ford Mustang leading the #3 RDV Compétition Gabillon-Delsaux duo by 29 points and the #2 TFT Chevrolet Camaro driven by Vilarino and Leonard Vernet, while a total of 8 teams are inside the 100 points gap with 394 points still to be assigned.

Rocca seems to be the favourite in the Junior “Jerome Sarran” Trophy, thanks to his 38 points advantage on Day,  while Lietz is very well placed to bring home the Challenger Trophy, with a 78-lengths advantage over Dominic Tiroch (#99 GDL Racing Ford Mustang).

Ready for the action? Race fans will be able to follow all races via live streaming on Fanschoice.TV (http://bit.ly/nweslive), while live text updates from the track will be available on the NASCAR Home Tracks on the Race Central Live page.

All the four races from the American Festival Circuit Zolder NASCAR Finals will be streamed live on Fanschoice.tvhttp://bit.ly/nweslive with the following schedule:

The Event: Circuit Zolder makes his debut in the calendar as the home of the NASCAR Whelen Euro Series Finals with the first edition of the American Festival. The weekend will begin thursday evening with an extraordinary parade from the track to the city of Hasselt, which will host technical inspections and a special autograph session. Beside the exciting racing on track, fans will enjoy all sorts of American Themed entertainment around the track for an unforgettable weekend.

The Procedure: 24 Cars will enter the Circuit Zolder Finals weekend. The starting field for each Division will be set by an 8-minute qualifying session, followed by a 5-minute Superpole with for the drivers posting the 12 fastest times. Each of the four races will be 64.176 Kilometers (16 laps) long and held under NASCAR rules, with double file restarts and an eventual Green-White-Checkered Finish attempt.

The circuit: Built in 1963, the 4,011Km (2.492mi) – 10 turns road courses is one of most iconic tracks in Europe. During its glorious history, it hosted a wide variety of motorsports event, from Formula 1 to Champcar and WTCC and currently features a very popular 24 Hours race. It also periodically hosts many other sporting events, like the Cycling World Championships and the BMX World Championships.

New NWES car to be unveiled: 2016 will be a key year for the NASCAR Whelen Euro Series and the cars will receive a “game changing” upgrade thanks to a new body and several technical upgrades to be presented at Zolder on October 2 at 19:00 CET. The body is designed to bring to the next level one of the European fastest growing Series. In seven seasons of racing, EuroNASCAR constantly improved its rock-solid reliability and performances to reach in 2015 a full second per lap gain on road courses over 2014, thanks also to the consistent tire development brought by Michelin.

Lauda Returns: After racing at Tours Speedway, Mathias Lauda (#66 DF1 Racing Chevrolet SS) will be back behind the wheel for DF1 NASCAR Racing, aiming to shine in the NASCAR Whelen Euro Series Finals at Circuit Zolder. The Austrian has 1 win and 9 top-10 finishes in 14 NWES starts.