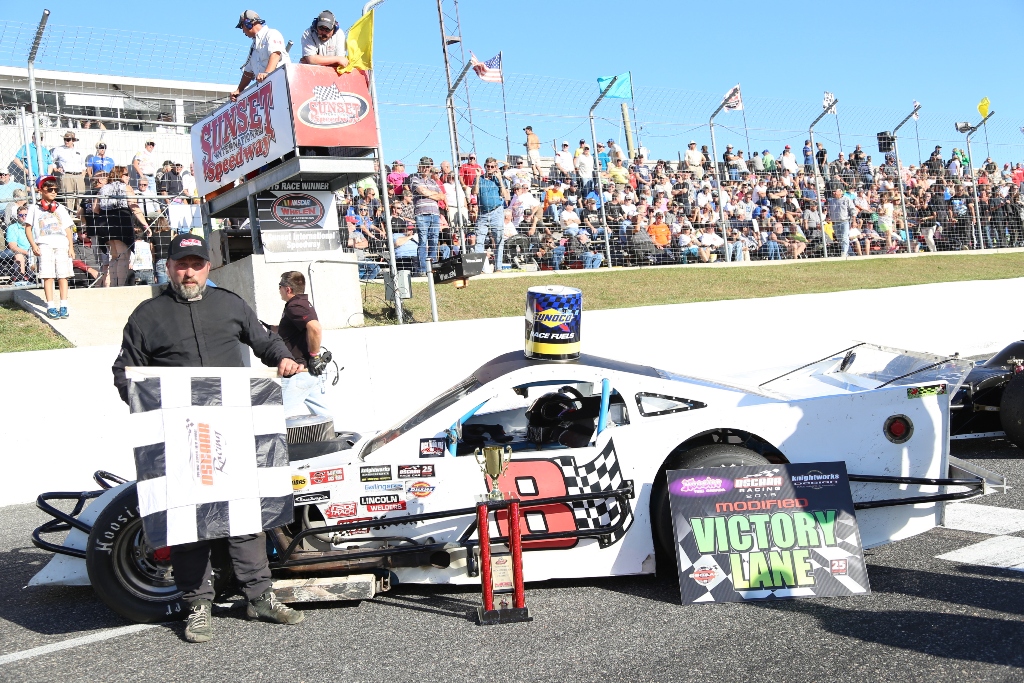 Starting mid-pack, Gary McLean carefully picked his way through the traffic en route to scoring the victory in the Velocity 250 presented by McColl Racing Enterprises.

“These guys are running hard and they want it bad,” McLean told Race Time Radio post-race. “It’s Velocity – everybody wants one, and we kind of get ourselves in a position when we do the invert all the time that we have to start that far back. But you know, we keep working and driving to the front and these guys give me a really good car so we can pull it off.”

For McLean, it marks his third straight victory and seventh on the season. It also marks his 12th victory at Sunset Speedway in 17 starts.

For the Hoosier OSCAAR Modifieds, they would qualify for the 40-lap feature on Saturday afternoon, which saw four different drivers visit victory lane.

The drop of the green flag would see a battle for the lead between Horner and Harper, with Horner grabbing the advantage on lap two ahead of Harper, Pearsall, Jackson and Strawn as Baker Jr. and Barton battled for sixth; Barton would get the spot on lap five.

Meanwhile, Di Venanzo went for the spin on lap one in turn three, but was able to get it back going before the caution was waved.

Barton then continued his climb to the front, getting alongside Strawn for fifth at lap six. He was unable to complete the pass, falling back in line ahead of Hearty. He would try once again to make the pass, but the caution would fly for Price spinning in turn three and four, collecting Emms in the process. There was then debris laying on the track, which was hit by both Baker Jr. and Strawn, forcing them both down pit road. With 32 laps to go, Horner led Harper, Pearsall, Jackson, Barton, Hearty, Gary McLean, Brian McLean, Baker and Balych.

The restart brought forth another battle for the lead between Harper and Horner, with Horner grabbing the advantage on lap 14 ahead of Harper as Hearty and Jackson battled for third. Hearty would get the spot on lap 16 ahead of Jackson, while Pearsall completed the top-five. Brian McLean would then pass Pearsall for fifth on lap 17, with Gary McLean following suit two laps later. Pearsall now ran seventh ahead of Baker, Barton, Terry and Baker. The caution would then fly on lap 21 for Price slowing in turn two. Under caution, Brent McLean, Emms and Strawn headed down pit road.

Horner would get a good restart to keep the lead ahead of Harper as Hearty and Jackson battled for third ahead of Gary McLean. The pair would battle till the third caution flew at lap 24 for Price going around in turn two grass, while McLean spun in turns one and two. Strawn would catch a piece of it, punching a hole in the radiator, ending his feature.

Horner would get another good restart to keep the lead ahead of Harper once again with Hearty running third ahead of Jackson. Brian McLean would then get alongside Jackson for fourth, completing the pass at lap 27, with Gary McLean following suit for fifth. Gary would then get alongside Brian for fourth, with the pair running side-by-side till the caution flew for Elliott spinning on the frontstretch.

Another strong restart for Horner would allow him to keep the lead, with Gary McLean moving into the second spot ahead of Jackson. Gary would then get alongside Horner for the lead with nine laps to go, putting the No. 8 McLean Industrial Design and Fabrication Ltd./McLean Farms Modified out front a lap later. Gary sounded off post-race that being on the outside for the restart was the key.

“That’s where I wanted to be for the restart,” he said. “Some days you can be on the inside and get it going. I knew that Cory was going to get it done on the outside. John Harper was a little tight on the bottom coming off so he had to lift. So I said to myself that I got the opportunity so I have to get up beside John (Harper) and get that lane and then I thought we’d see. I thought (Cory) Horner was really fast, but we got lucky as he pushed up off of two.”

Horner would now run second ahead of Jackson as Harper and Hearty battled for fourth. Hearty would get the spot with six laps to go with Baker trying to follow suit. Baker was unable to follow Hearty through, though, as he fell back in line in sixth behind Harper.

Brian McLean would run seventh ahead of Pearsall and Barton as Baker Jr. and Terry battled for 10th with two laps to go. Brian would then get alongside Baker for sixth on the white flag lap.

Gary McLean commented post-race that it was tough in the beginning to make his way through the field as there wasn’t any place to go.

“We were kind of just hanging out and seeing the way guys were racing,” he commented. “I knew by the way the cars looked that it wouldn’t be long before they started pushing, little worse, little worse and I figured we’d just save our tire and bide our time. If the hole opens up, we’ll go for it but if it doesn’t, I guess that’s the way it ends up.”

The second place finish will bode well for Horner in the rookie standings, as he entered the weekend with a two-point lead over John Baker Jr. following Delaware Speedway.

“We were really looking hard for our first win of the season,” he commented. “Right now, we’re just battling hard for rookie points so second is still okay for us.”

Horner added that the car was good at the beginning of the race, but fell off in the final five to 10 laps of the 40 lap feature. The runner-up marks fifth top-five and eighth top-10 of 2015.

For Jackson, it marked his second top-six finish in his second start of the season as he finished sixth at Sunset Speedway back in August.

“The car wasn’t working as good in practice or as in the heat races; it was a little tight,” Jackson told Race Time Radio post-race. “I managed to get on the outside and get lucky on the restart. “I’m happy with third.”

Jackson would go on to add that running the outside groove paid off late in the race due to having a tight car.

“When you have a tight car, in the middle of the corner if there’s a guy outside of you, you have to let off a little bit more or you’re going to slide up into them,” he explained. “On the outside, you can just hammer on the gas and get a good run off the corner.”

The Hoosier OSCAAR Modifieds will complete their season at Peterborough Speedway as part of the Autumn Colors Classic weekend.