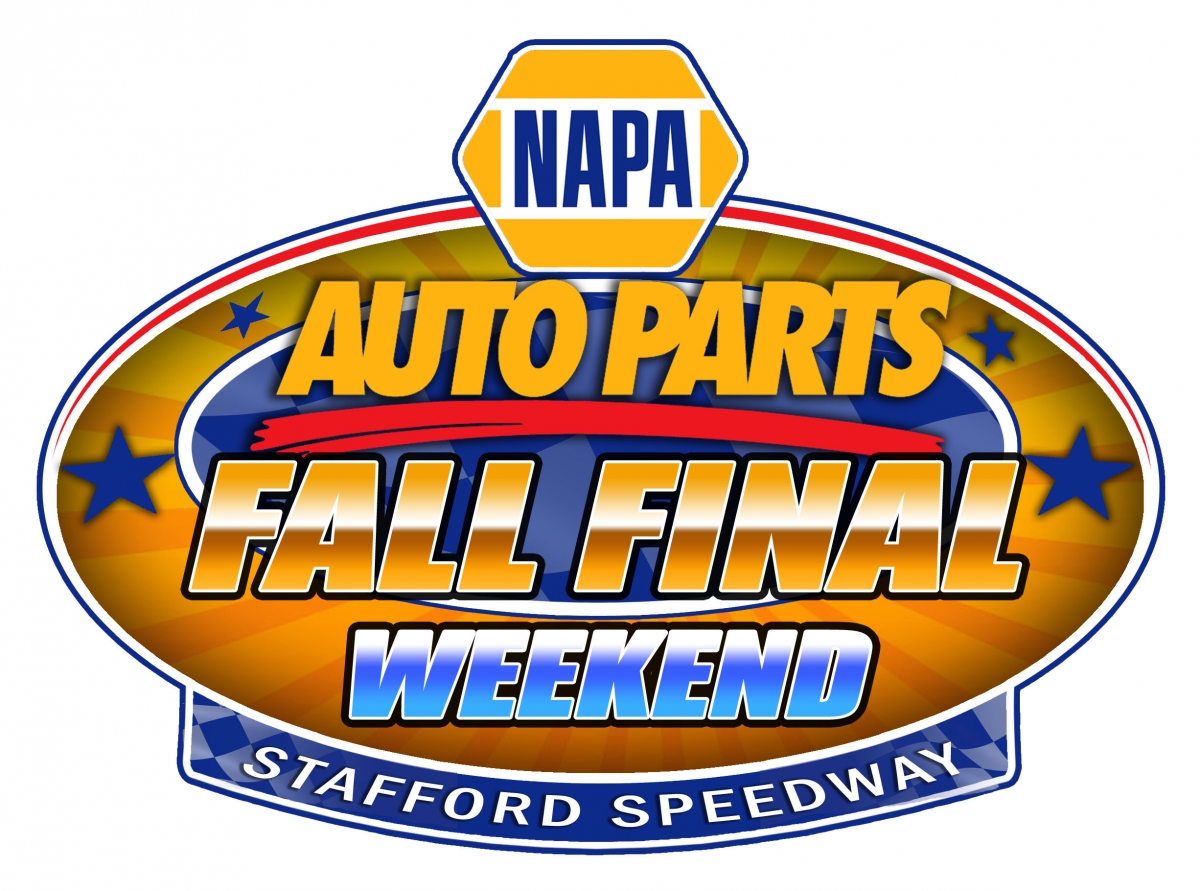 DAYTONA BEACH, Fla. – The NASCAR Whelen Modified Tour is set to headline Stafford (Connecticut) Motor Speedway’s 43rd Annual NAPA Auto Parts Fall Final Weekend with the NAPA Fall Final 150 on Sunday. Below is a statistical look at the performance of the tour and selected drivers at the track:

NAPA Fall Final 150 Setup:
• Woody Pitkat leads Ryan Preece by eight points and Doug Coby by 11 in the championship standings entering the next-to-last race of the season. Preece, Coby and Pitkat finished 1-2-3 in the last NASCAR Whelen Modified Tour visit to Stafford Motor Speedway in August.
• Preece and Pitkat have combined to win the last five races at Stafford. Preece is the defending winner of the NAPA Fall Final 150, and won the two Friday night races there this year.
• Prior to the run of Pitkat and Preece, Coby and Bobby Santos compiled eight wins in a 10-race stretch at Stafford from 2012-14.
• Eric Goodale will make his 100th career start in this race. He maintains the active starts streak lead, currently at 97 races entering Stafford.

At Stafford Motor Speedway:
History
• The Stafford Springs Agricultural Park opened in 1870. The current race track was originally used for horse racing, which gave way to automobiles after World War II.
• Stafford Motor Speedway became a NASCAR-sanctioned track in 1959 and was paved in 1967.
• Stafford is one of nine tracks that have been a part of the NASCAR Whelen All-American Series program in each of its 34 years of competition.
• The inaugural NASCAR Whelen Modified Tour race at Stafford was held on April 14, 1985. NASCAR Hall of Famer Richie Evans won the 80-lap race as part of the 14th Annual Spring Sizzler weekend.

Notebook
• The NWMT has held 117 races at Stafford since 1985, a total second only to the 129 events at Thompson Speedway Motorsports Park.
• Stafford has held multiple races in 30 of the tour’s 31 seasons. The lone exception was 1988.
• There have been 32 different race winners at Stafford, led by Mike Stefanik’s 20 victories.
• There have been 43 different pole winners at Stafford, led by Stefanik’s 17. Ryan Preece set the track qualifying record in the 2012 Spring Sizzler.
• No driver has started all previous 117 races at Stafford. Jamie Tomaino has missed only one – the track’s inaugural race.
• There have been seven races won in wire-to-wire fashion at Stafford, the last by Ron Silk in 2011.
• Ryan Preece was the youngest Stafford race winner at 18 years, 9 months and 14 days in 2009.
• Ted Christopher was the oldest Stafford victor at 53 years, 3 months and 28 days in 2011.
• The NAPA Fall Final 150 entry list features 10 drivers that have previously won at the track: Christopher (12), Doug Coby and Bobby Santos (6), Preece (5), Donny Lia and Todd Szegedy (4), Woody Pitkat (2), James Civali (1), Silk (1) and Tomaino (1).

Ted Christopher (No. 22 Canto Paving/Ferguson Waterworks Chevrolet)
• The 2008 NWMT champion has 42 wins, 24 poles and 198 top 10s in 359 career starts. His 42 wins rank third all-time and his 24 poles are eighth.
• Is looking to end a 53-race winless drought. It’s the second-longest such streak in his career. His first win came in his 94th race.
• Sits 14th in points with six top 10s in 11 starts.
• Has 12 wins, four poles, 51 top 10s, an average finish of 13th and 2,083 laps led in 91 career NWMT Stafford starts.
• Is a nine-time NASCAR Whelen All-American Series track champion at Stafford out of the SK Modified division, where his 101 triumphs are more than double second place on the division wins list. Has a record 122 overall career victories at the track entering this week’s events.

Patrick Emerling (No. 07 Buffalo Auto Auction Chevrolet)
• Has two poles and 24 top 10s in 67 career starts with a best finish of second last week at New Hampshire Motor Speedway. Both poles were earned this year.
• Ranks fifth in points this year on the strength of a career-high eight top 10s.
• Has a pole (Aug. 2015), five top 10s, an average finish of 16th and a best run of fifth (Sept. 2014) in 19 Stafford starts.

Woody Pitkat (No. 88 Buzz Chew Chevrolet/Elbow East Chevrolet)
• Has three wins, four poles and 55 top 10s in 104 career starts.
• Is the championship points leader with a tour-high 10 top-five finishes, highlighted by a win in the Spring Sizzler. Also won the non-points All-Star Shootout in July at NHMS.
• Has two wins, 18 top 10s and an average finish of 12.5 in 29 NWMT races at Stafford.
• Has 28 career wins in Stafford’s SK Modified division. His 75 overall career feature wins at the track rank second all-time behind Ted Christopher.

Timmy Solomito (No. 16 Diversified Metals/R.B. Enterprises Ford)
• The 2014 Sunoco Rookie of the Year has a pole and 15 top 10s in 33 career starts with a best finish of third at Riverhead in September 2013 and at Stafford this June.
• Ranks seventh in points with seven top 10s through 13 events.
• Has an average finish of 13th with a best run of third (June 2015) in nine career Stafford races.

Other Driver Notes
• A six-time winner in Stafford’s SK Modified division this year, Ronnie Williams is set to make his NWMT debut in this event.
• Rookie Matt Swanson made his NWMT debut in the tour’s last visit to Stafford in August with a finish of 15th.
• Recent Stafford NWAAS alum Troy Talman has an average finish of 18th in three NWMT races there this year.
• This will be James Civali’s first race at Stafford since the August 2011 event.

Up To Speed:
• This is the NASCAR Whelen Modified Tour’s 30th Anniversary season. The inaugural race was contested March 31, 1985 at Thompson Speedway Motorsports Park.
• The 2015 schedule features 15 points races at seven different tracks across four states.
• Doug Coby opened up his title defense with a win from the pole in the Thompson Icebreaker 150 on April 12.
• Woody Pitkat earned the NAPA Spring Sizzler 200 victory on April 26 at Stafford Motor Speedway.
• Ryan Preece emerged victorious at New London-Waterford Speedbowl in the Mr. Rooter 161 on May 30.
• Preece made it two-in-a-row with a victory in the TSI Harley-Davidson 125 on June 5 at Stafford.
• Coby won at Thompson for the second consecutive outing with the Mr. Rooter 125 victory on June 10.
• The Riverhead Hoosier Tire East 200 was postponed one day by rain, then dominated in victory by Justin Bonsignore.
• Todd Szegedy won the Andy Blacksmith 100 presented by Donate Life New England on July 18 at New Hampshire Motor Speedway.
• Coby notched the first bullring win of his career on July 25 when he reached Victory Lane at Monadnock Speedway in the O’Reilly Auto Parts 200.
• Preece made it two-in-a-row at Stafford when he won the Call Before You Dig 150 on Aug. 7.
• Coby moved to three-for-three in 2015 at Thompson when he won the Budweiser King of Beers 150 on Aug. 12.
• Preece notched his first Bristol victory when he won the rain-delayed and abbreviated Bush’s Beans 150 on Aug. 19.
• Bonsignore turned in the 2015 Riverhead sweep as he won the Riverhead 200 on Aug. 29.
• Coby won from the pole at NHMS on Sept. 26.
• Following the NAPA Fall Final 150, the NWMT will close out the 2015 season on Oct. 18 at Thompson.