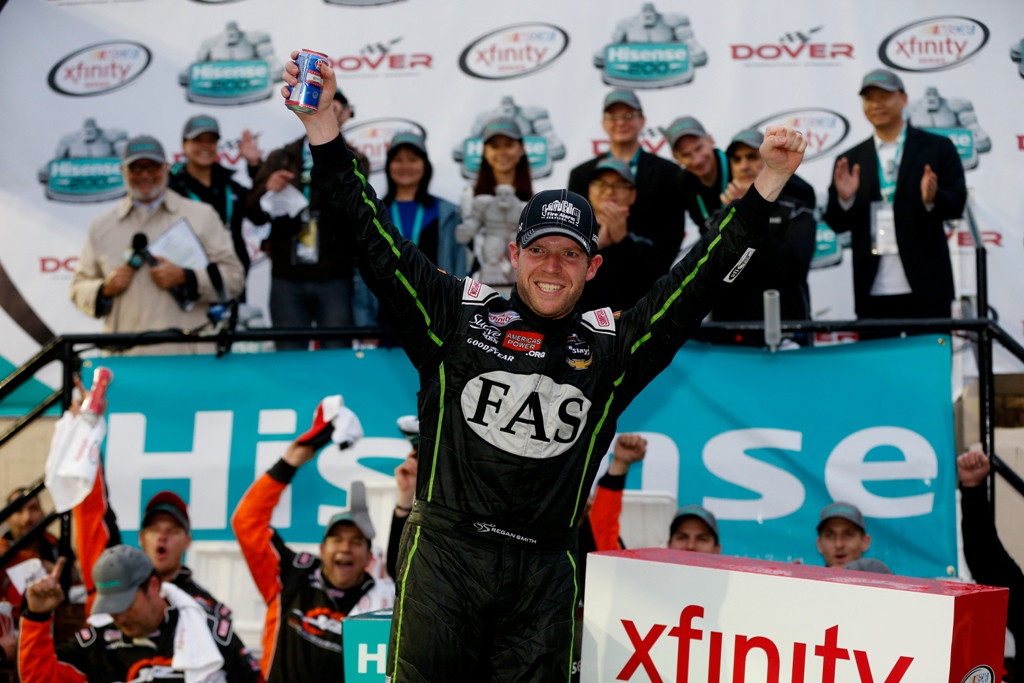 Despite a stumble that dropped Regan Smith a good distance back in the points mid-season, the JR Motorsports driver has hit his stride as of late. In the past eight races, Smith has finished in the top-nine and been able to move himself up to third in points, 36 points behind Chris Buescher.

On Saturday, Smith gained the maximum points that he could as he scored the victory. It wasn’t an easy road, though, as he had to fight back after having a flat tire during the first half of the Hisense 200.

“Once I got that flat tire, I had five laps catching the other cars once I cleared the lap cars – in the clean air, I realized how good the car was,” he noted. “I just kept passing cars and we kept tuning on it – I don’t even know what the last adjustment was with 90 to go or whenever we stopped. Whatever it was, it worked.”

Smith was able to get himself in position, and then his pit crew helped out, getting him off of pit road in the fourth spot, third driver in line with tires after Elliott Sadler made the decision to stay out.

“My plan was to just clear the 54 (Kyle Busch) and when the 20 (Denny Hamlin) and 1 (Elliott Sadler) got battling, I could get by the 1 and see if I could keep up with him and perhaps separate those cars,” Smith said of his thoughts going into the restart.

Instead, Sadler would slow up the lane, allowing Smith to get the jump and make his way quickly from fourth to the lead. At that point, it was all about managing the traffic and the fuel mileage in order to stay out front of the field.

“I had one moment where I got caught up in the lap traffic and (Hamlin) got a run, and absolutely knew I didn’t want to let him get by me as I knew it wouldn’t pass him and vise versa,” Smith commented. “He then started saving some fuel so I started doing the same and managing that 10-15 car length gap. I didn’t want him to get close in the end ‘cause I didn’t want that hard because I might of made a mistake.”

For Smith, it marks a huge accomplishment as he says it reflects on the job that crew chief Jason Burdett has been doing, but how well the organization has their cars working to beat an organization like Joe Gibbs Racing.

“Anytime you beat the Gibbs cars at Dover, you’ve worked your tail off and had a good day and had a fast car,” he said. “I know how hard my team has been working on these cars and the effort that they’ve been putting into them every week and we feel like we could have four or five of these at this point in the year. We’ve been pretty steady all year so it’s a big deal for us.”

Crew chief Burdett says that JGR has looked to have the stronger cars due to how closely they’re affiliated with their Sprint Cup team.

“We get a lot of help from Hendrick Motorsports no doubt, but I think there’s a little gap from us being 30 miles away from the HMS complex,” he explained. “We get a lot of help – but I think they get more. They’re a lot closer together and they tend to have the class of the field with regards to cars – same with Penske. Being in-house in the Cup teams makes a huge difference. Our guys work an unbelievable amount of hours. We go to the wind tunnel and the rigs and all these things, but in our shop, we have eight engineers in our building to do our three teams, whereas Gibbs has 20-30 engineers. I think that’s the biggest difference – the size of the team and where you get your help from your Cup affiliation.”

Despite JGR looking as though they’re the stronger organization, it doesn’t mean that JR Motorsports hasn’t been busy. Smith commented that he believes right now, the cars that they’re driving have the most speed that he’s seen in the three seasons that he has driven for JR Motorsports.

“We’ve just had good racecars,” he commented. “This team has been really strong all year long. There’s only two or three places that I can say we had a rough day, and even those days we salvaged top-10 somehow and if it wasn’t a top-10, then it’d be 11th or 12th. When you take out a couple problems at Daytona and another problem, we’ve been solid all year. I can personally say this has been my best year at JR Motorsports as a driver, speed-wise.”

Beyond helping his championship hopes, the victory is huge for Smith as he has yet to sign any contracts for next season.

“They’re all big but when you don’t know what your job is for next year it’s huge,” he shared. “I guess it won’t hurt for solidifying my job status. We’re working hard on a lot of things so I’ll worry about that Monday thru Wednesday. Tonight, I’m going to drink a lot of Dale’s Pale Ale and have a headache tomorrow; I’m not going to lie.”

Smith said that right now “everything is on the table” and he’s looking at “everything and every possibility” moving forward for 2016.

“I’m fortunate to be at a great race team and been here three years,” he added. “I’m not going to worry about that stuff right now. We’re back in this championship hunt and we’re going to worry about racing as hard as we can to solidify that and let the rest of the stuff take care of itself. If I’m fortunate enough to be here for another year, that’s great – but at the same time, I’m appreciative of the three years that I’ve had here.”