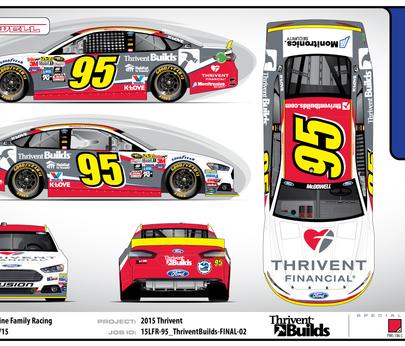 During the NASCAR Sprint Cup Series race weekend occurring Oct. 8-10 at Charlotte Motor Speedway, the No. 95 Thrivent Financial Ford Fusion will have a fan favorite celebratory paint scheme honoring this long-time partnership between Thrivent and Habitat known as Thrivent Builds with Habitat for Humanity.

“We know the NASCAR community – including the drivers, teams and race fans – are very active in giving back to the community, and we’re proud to be able to extend what we do with Habitat and involve the NASCAR community,” said Craig Stacey, Director of Content Marketing at Thrivent Financial. “Not only did race fans pick this special 10th Anniversary Thrivent Builds paint scheme for the Charlotte Motor Speedway race, they also have clicked to contribute $65,000 and counting to Habitat for Humanity just by playing our online game at www.ThriventRacing.com that triggers donations from Thrivent.”

Thrivent is Habitat’s largest nongovernmental supporter. Since 2005, Thrivent members have constructed or repaired more than 4,000 homes around the world and committed more than $213 million and 4.4 million volunteer hours. In 2015, Thrivent has pledged $12 million to build 121 homes, repair up to 450 homes and support 120 Thrivent Builds Worldwide trips for volunteers to build homes in countries around the globe.

“We could not be more excited about this weekend’s Charlotte Motor Speedway race, and we’re firmly in the corner of Michael McDowell and Leavine Family Racing,” said Larry Gluth, senior vice president, Habitat for Humanity International. “Seeing the Habitat colors on his No. 95 Thrivent Financial Ford Fusion is exciting, an honor and we couldn’t be more thrilled.  Thrivent Financial has been such an integral part of Habitat’s success over the years, and we’re so happy to be associated in the NASCAR community by McDowell and Leavine Family Racing.”

Leavine Family Racing and McDowell have participated in two Thrivent Builds projects in local race markets alongside partner families and volunteers from Thrivent and the local community. The team visited Hickory, N.C. in April to build an access ramp for a local homeowner and volunteered to make critical repair to a home in Indianapolis prior to the Brickyard 400 race.

McDowell, a Thrivent member himself, has joined the more than 200,000 Thrivent members who have volunteered and changed lives through Thrivent Builds with Habitat for Humanity and is honored to run this celebratory paint scheme.

“We travel all across the country during the race season and it’s great to come alongside Thrivent and Habitat to serve the community,” said McDowell. “When you go and do a community project or you go and serve, you always feel like you’re going to help someone or bless somebody but you always get blessed in the process. I’m honored to be able to participate in the Thrivent Builds program and share this celebration with NASCAR race fans during the Charlotte race weekend.”

Race fans have until Oct. 15, 2015 to participate in the Driven To Thrive – To 95 online game* that benefits Habitat for Humanity. By playing the online game, participants will trigger donations to Habitat from Thrivent. All players will be entered to win the grand prize – a VIP trip for two to the championship race in Homestead, Fla. For official rules and to play, visit www.ThriventRacing.com.

*Thrivent will make a $95,000 contribution to Habitat for Humanity International in connection with this Promotion. Unlocking a tile is for entertainment purposes only and will not affect Thrivent’s contribution amount.