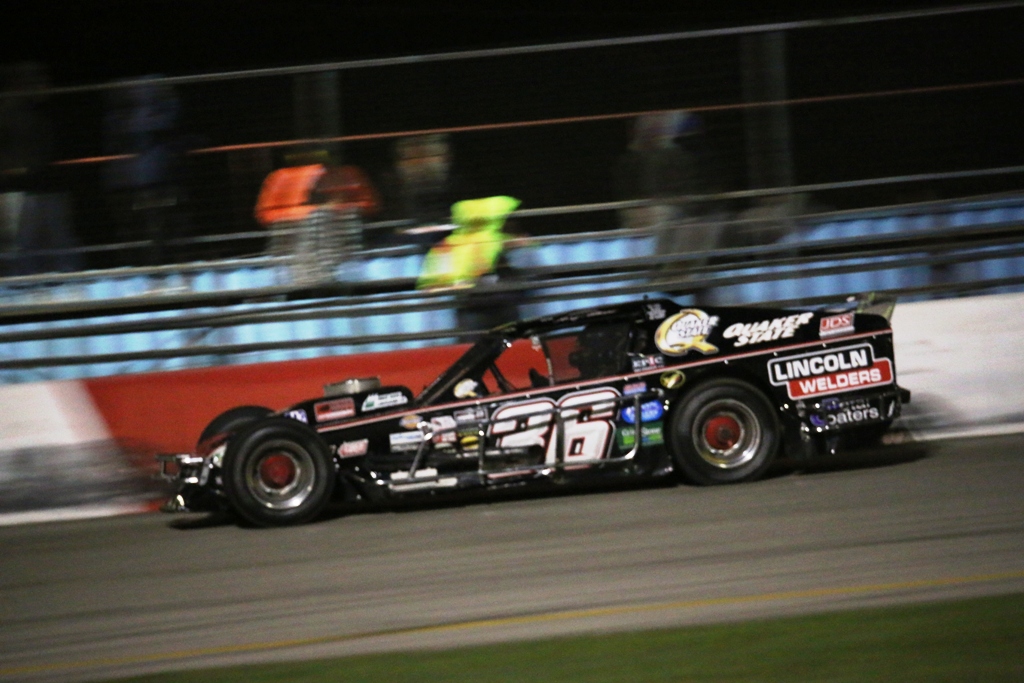 In 1969, a young man by the name of Gary Elliott started racing behind the wheel of a mini stock. While he didn’t make all the races of the season, there was still around 15 nights that you could catch him racing at your local race track in Ontario.

“I didn’t have a good tow vehicle,” he admitted as to why he didn’t make all the night then. “My dad helped me whenever he could so it was could of a tough year with not having a place to work on the car.”

From Mini Stocks, Elliott moved up to the Canadian Vintage Modifieds, once again running as many nights as he could. However, getting everything together, he was able to get a streak going – running 152 straight nights in a row from the late 1970s till the end of 1986. The streak would come to an end at the beginning of the 1987 season following an altercation with another driver that got him suspended for two nights.

“That broke my heart really bad,” he admitted. “I was very upset about that. I love racing and I love the people in racing. But my dad had died that weekend so I was kind of weak. I was trying to get our cars separated and he said something that didn’t go over too good and I ended up taking some swings at him.

“Nobody really seen it but then it carried over in the pits and then when that happened, I ended up getting suspended for two nights.”

That night turned out to be a night that would change Elliott’s career from there on out as he vowed to never miss a night for the rest of career. From June 5, 1987 to this weekend Autumn Colors Classic at Peterborough Speedway, Elliott will have ran 752 consecutive nights of competition through a variety of different vehicles over the years.

“I have to thank God more than anything for good healthy and supplying me with the people that I need and all aspects – sponsors, friends, crew, so many people have been really good to me,” Elliott commented. “They’ve come to me asking me if I need help to get my car ready. I’ve been without an engine – blew an engine – and I’ve driven for an hour to pick up an engine that somebody would loan me. If that didn’t happen, mine wouldn’t be ready in time.”

To put that in perspective, Jeff Gordon currently holds the longest streak of consecutive races in the Sprint Cup Series at 791 with this weekend’s event at Charlotte Motor Speedway. With only six more races before the end of the season and his retirement, he will end off his career with 797 consecutive events.

Elliott says for his career, he is aiming at running 800 consecutive night in a row and with about 25 nights a season, that’d take two more years to complete. He adds that would go along with his second goal hitting 50 years total of competition, which will be 2018.

“But, if my health is good, it’ll be hard for me to quit. I don’t know what I want to do,” he admits. “I don’t want to play golf and I know I can’t make the Blue Jays as much as I like baseball; I won’t be able make them guys and that’d be nice because imagine making $12 million a year to do something you like. So I think – I’m not sure what I want to do.

“I don’t want to be an announcer or a photographer, I respect what you guys do and they do. I don’t know if perhaps after I retire to maybe run a race track. I think that’s probably what I’d like to do, but I’d like to work with a track owner that’d give me full reigns; I don’t want to be handcuffed. If there was an opportunity to manage a track from every aspect, then I think I’d consider that.” On top of that impressive streak, Ontario’s “Iron Man” has officially competed in 1201 nights total in career dating back to the beginning in 1969.

“There is no goal for the number of nights because if you think about it, if I wanted to run 2000 nights, that’ll be another 800 and 20 nights a year, that’d be 40 years,” he commented. “That’s the thing to – if someone runs OSCAAR or Vintage Modifieds or any series, if they start racing when they’re 15 years old and ran 15 nights a year, they’d have to run 80 years to get 1200.”

Looking back on the accomplishment, Elliott says a big thanks goes to the pit crew members that he has work with him over the years in handling the demands of his schedule of running 25 to 34 nights a season from the late 1980s to the early 1990s.

“It wasn’t easy,” he admits. “We’d wreck our car on one night and then we’d need to work all night so if those guys hadn’t helped me, it’d be hard to do that myself. I could not have done it myself as there was way too much to do. We’d come home from wherever we wrecked and then we’d go into the garage and start thrashing to daylight and head to the next race.

“The car wouldn’t be good, but I didn’t care. I wanted to be there and be at the next race. I didn’t care if my car wasn’t right – spindles were bent, axles were bent -whatever we had that we could put on the car to get me to the next race, we’d race. Then we’d race as good as we could knowing that during the week, I’m going to fix it and make it better for the following week.”

Elliott added that while people have accused him of perhaps not trying as hard as he could to win races, they’re not understanding how he budgets his schedule to be able to do what he does.

“I can’t afford to race and not respect my own stuff and other people’s stuff,” he continued. “If I drive that way, it’ll cost me a lot more money. So I’ve been driving conservative pretty well the last 15 to 20 years – but I’m still finishing good in points and backing out instead of driving in. I’m not saying that I haven’t ever done that, but I do try to drive with a lot of respect because it saves you a lot of money and allows you to not have to worry a lot about not making the next event because your car will be in good shape.” One of his strengths over the years has been his ability to create long standing relationships with sponsors as Quaker State has been on board for the past 42 seasons with Elliott.  That relationship has lasted from working with the sponsor, from sending them constant updates to doing shows with them to display the car for their benefit.

For Elliott, working with the sponsor goes back to one of his key pieces of advice from his career – you need to put back into something that you love, and not just take away from it. He admits there’s a lot of drivers that may not do that – just focusing on themselves, but states if people don’t put back, the whole sport will struggle.

“The drivers need to put back,” he stated. “They need to encourage people to come out and help other drivers. For example, I have two guys helping me that I race against because none of my crew will be here. It’s really cool that Cory and Darryl Horner are going to help me this weekend.

“That’s what racing to me is about – it’s about people. It’s about the friends that you make, the relationships that you have. It’s not about the people, it’s not about anything. After you win a race, who do you high-five? It’s a great sport and we just need to help it and we help it by being here.”