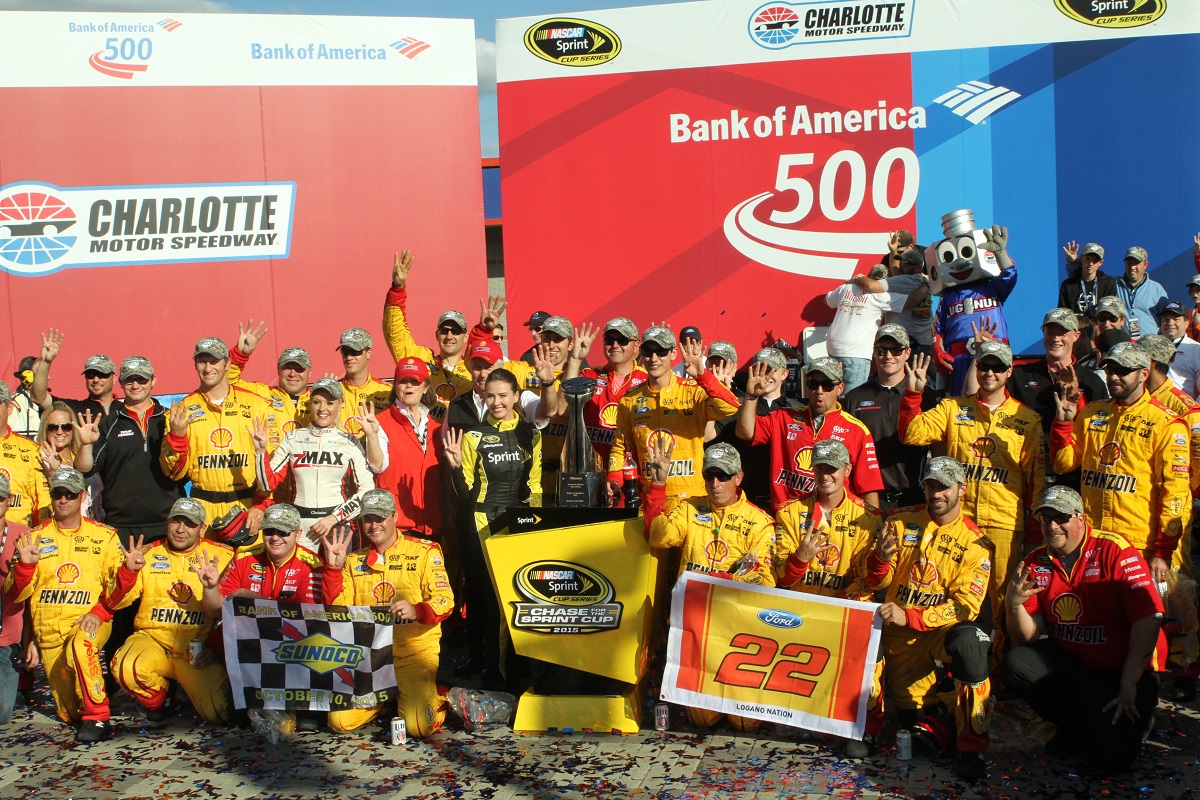 LOGANO ADVANCES TO ELIMINATOR ROUND WITH FIRST CHARLOTTE WIN
•    Joey Logano’s win today is his fourth NASCAR Sprint Cup Series victory of the season and 12th of his career.
•    Logano advances to the Eliminator Round for the second consecutive year after winning his third career Chase race.
•    The win is Fusion’s 68th NSCS triumph since becoming Ford’s flagship vehicle in 2006.
•    Ford now has 637 all-time NSCS victories.
•    Team Penske has now registered 45 NSCS wins with Ford, including 18 over the past three years.
•    This marks Ford’s 29th all-time NASCAR CHASE victory.

JOEY LOGANO – No. 22 Shell/Pennzoil Ford Fusion – VICTORY LANE INTERVIEW – “We had a great car.  Todd Gordon and this Shell/Pennzoil team, all of Team Penske, you always want to win it.  Charlotte is everybody’s home turf and you want to make it happen here.  What a great car.  We led a ton of laps and I just have to thank Ford and Shell and AutoTrader, SKF, Coca-Cola – everyone that supports what we’re doing.  This makes Talladega way easier.  I know that’s on everyone’s mind when this round starts and last year we won Kansas when it was the first race of this round and now we were able to get it this time at Charlotte.  We’ll get lots of sleep here the next couple of weeks.”  WHY DID IT WORK FOR YOU HERE TODAY?  “Because what we did before didn’t work.  We were trying something different and Todd did a good job.  We’ve struggled here the last three or four years and this week we obviously made some good changes to our race car and had a very fast race car.  This helps us recharge our batteries and get ready for the next round and come out swinging for that one.”  WHAT DOES IT MEAN TO BEAT THE 4 CAR LIKE THAT?  “I think everyone saw how fast he was last week and it probably made a lot of people nervous, but our team kept their heads up and stayed confident.  We know we can beat them.  We know we’ve got what we need over here and our team is as tight-knit as they get.  I’m proud of them.  I couldn’t be more proud of them.  We had a lot of money stops today to keep us out front.  The pit stops were great and I couldn’t be more proud of what they’re doing right now.”

BRAD KESELOWSKI – No. 2 Detroit Genuine Parts Ford Fusion – “It was a lot of work.  We weren’t as fast as we wanted to be.  When we had green flag pit stops we seemed to be really fast with the Detroit Genuine Parts Ford, but on restarts and yellow flags I’d just get stuck in the dirty air and couldn’t move anywhere.  I think the 24 car looked really good.  He was the only guy I saw that was really able to pass today, but I just couldn’t pass.  I thought we had a fast car and if we could have got out front maybe we could have stayed out front, but that wasn’t the case today.  It was a good effort to keep the wheels on it on a rough day, so to speak, and make the most of it so we’re not in bad shape for the next two races.”  WHAT GOES THROUGH YOUR MIND FOR THESE NEXT TWO RACES?  “We need to have another solid day at Kansas or we’re really gonna sweat Talladega.  A couple of Chase guys had some bad luck and that could happen to us, too, so we have to stand the test.”

RYAN BLANEY – No. 21 PPG Ford Fusion – “I didn’t think we were bad all day.  We didn’t start off too bad and we progressively made it better throughout the day, which I was happy with.  I was running fairly good there most of the day and we had one adjustment that wasn’t good.  It was the second-to-last run and we lost track position.  We slipped from about 10th to 13th or 14th and it’s just hard to get it back, especially when there are no more cautions and it’s green flag sequences.  It’s hard to get it back and pass everybody, so I’m really happy to have PPG on our Ford Fusion today.  That was a lot of fun and it was nice to get a full race here.  It was a good job by my guys being able to compensate from preparing to race last night to the heat of the day today, so they did a good job.”

ARIC ALMIROLA – No. 43 Smithfield Ford Fusion – “Another top-10 for us.  We’ve got some speed in our cars and they’re driving good.  Trent and the guys have been doing a good job, so I’m really happy with our consistency and we just have to keep working at it.  We have a few more weeks to go to try and steal a win, but, otherwise, I think we’re on to something.  I think we’re running a lot better and I’m really proud of everybody at Richard Petty Motorsports for bringing me these nice race cars these last six weeks.”  TOUGH TO PASS.  “Yeah, it was tough to pass.  We had a screw up on a pit stop at one point and that kind of got us behind.  We fell back to 19th and I was actually happy with how I was able to maneuver traffic.  We were able to pass some cars, so it seemed like our car drove in traffic better than others and I was pleased, but we still have a little bit more work to do to go and race up there inside the top-5 and go try and win some races.”