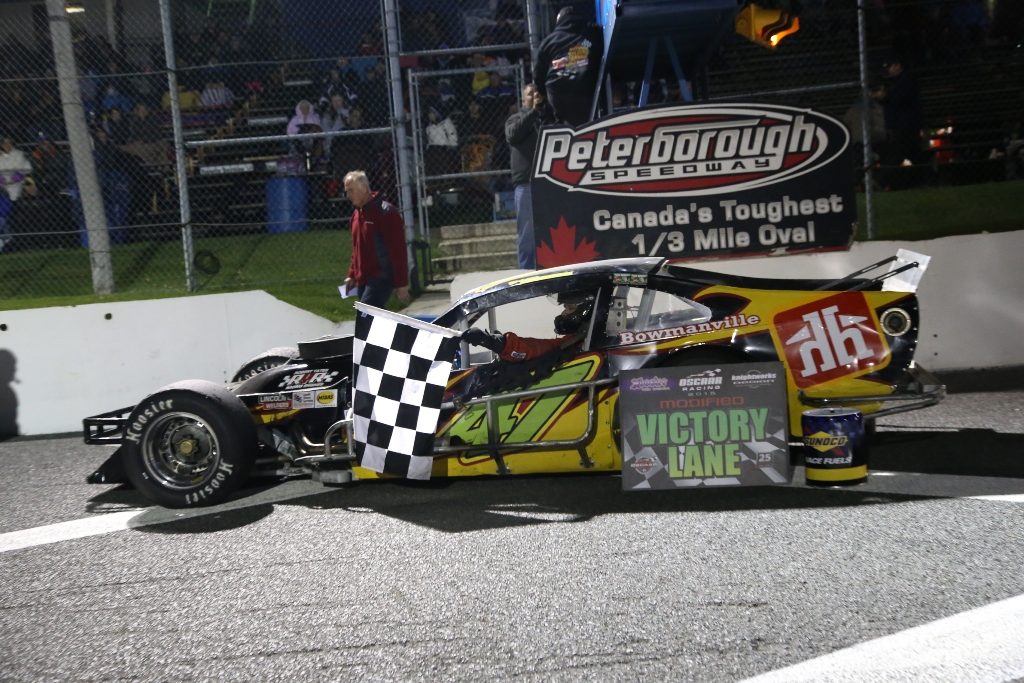 On Friday and Saturday at Peterborough Speedway, qualifying kicked off for the 23rd Annual Autumn Colours Classic with the heats for the Hoosier OSCAAR Modified.

The second heat would see Cole McFadden go around in turn four on lap four, followed by Dan Price getting sideways on the restart virtue of contact and going around on the frontstretch. Brian McLean won the heat ahead of John Baker Jr., Brent McLean, John Harper, Dustin Jackson, Duane Cinnamon, Price, Rob Di Venanzo, McFadden and Willow Barberstock.

The third heat would get messy with contact made on the frontstretch by Cinnamon and Gary McLean on lap two. Then on the backstretch, perhaps with help or perhaps not, McLean would climb the backstretch wall. Following the incident, he would make contact with Cinnamon under caution. McLean already has the pole locked up virtue of winning the Chase for the Colours earlier this year. His crew was able to fix the car before the night was over, with McLean returning to the track for some hot laps.

A second caution would then fly on lap eight for Dean Scott going around in turn two. Chad Strawn picked up the win ahead of Horner, Jackson, Balych, Brian McLean, Emms, Hearty, Cinnamon and Barberstock.

The Hoosier OSCAAR Modifieds will return to the track on Saturday for their second round of heats, followed by the 40-lap feature on Sunday.