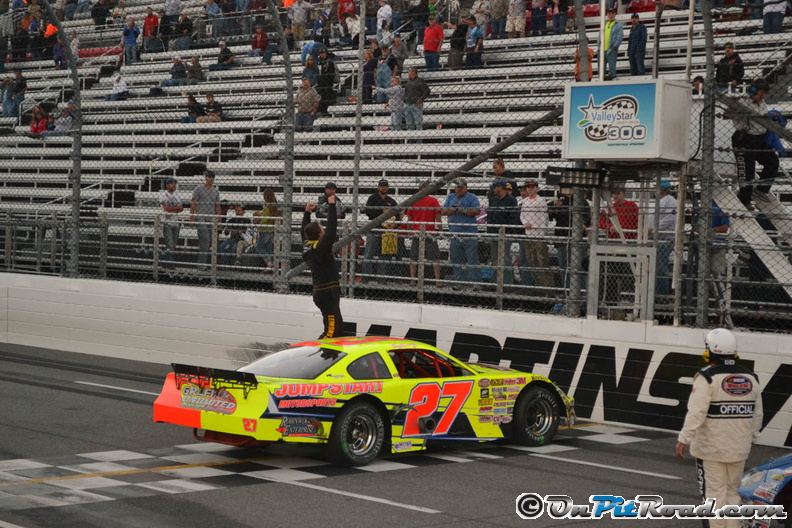 The Last Chance race was a action packed race. Nick Smith led the field to the green, but it wasnt long before the caution came out on lap 10 when Brandon Baker cut a tire down. The field went back to green and on lap 14, the caution came out again when several cars got together and piled up in turn three.

The field was set for the final Valley Star Credit Union 300. With Timothy Peters and Jake Crum being locked into the race, it was Peters who lead the 42 car field to the green flag. Peters dominated early on in the race, until lap 28 when Anthony Anders cut a left rear tire down and came to a stop in turn three. Peters once again led the field to the green. Todd Gilliland was charging hard to the front and was soon to be the one leading the pack around the “paperclip”. The second caution came out on lap 41 when a few cars colided with each other to bring out the second caution. Gilliland continued to lead the field when the third caution came back out again on lap 50.

Jake Crum had slid up into the second place and was applying heavy pressure onto Gilliland. But Davin Scites cut a tire down and hit the turn three wall bringing out the fourth caution on lap 71. Gilliland had figured out the track and had a straight away lead on the field. The caution came back out on lap 83. Once again Gilliland paced the field around in dominant fashion. On lap 90 the sixth caution came out when seven cars got together on the track causing a road block. Crum had not given up and stole the lead back from Gilliland. On lap 100, the halfway point of the race, the caution came back out for a mandatory fuel break. Crum and Gilliland tossed the lead back and forth for several laps. The lap 150 caution break came out and a number was drawn to determine inversion. When the field went back to green the top eight cars were inverted handing the lead over to Tommy Lemmons Jr.

Gilliland had worked his way back up to the front by lap 175, and was reeling in Lemmons. With just a handful of laps to go, Gilliland fell back and out of the top ten. The caution came out a few more times and the only driver to have anything for Lemmons was Timothy Peters. They battled door to door the last two laps of the race. Lemmons took the white flag lap and was headed down the back stretch when Peters gave it his all again and drove deep into turn three. Both were neck and neck coming out of four and made contact with each other, Lemmons recovered but Peters did not. He went head on into the front stretch wall, bounced off and veered back onto oncoming traffic. Several other cars made contact with him before he finally came to rest.

Tommy Lemmons Jr collected the big pay check and his second historical grandfather clock. “The first win here was the hardest back in 2013, this one almost tops it, we got lucky on that invert and just kept it out front the whole time. Timothy gave me a shot, which was expected. We was going for $25,000 and this beautiful clock, luckily we came out with. I just had to get clean restarts and keep it up front”, stated Lemmons.

Pulliam commented after the race saying, “It was wild man, I gave it everything I had man, just came up a little short. Timothy tried to wreck Tommy coming out of four and it bit his self. It was just hard racing, everybody wants to win this deal. We only get to do this once a year. We ended up a little short”

“We had a good car, just drove it down to turn three, and just tried to chase him up the track. I was going to try and hit him just to slow his momentum down but it just shot me right into the wall. I hate it we got a tore up race track but at least we ran good all day”, said Peters, discussing the last lap.

In the end, it was Lemmons scoring the win, with Pulliam, Smith, Peters, and Swaim rounding out the top-five.