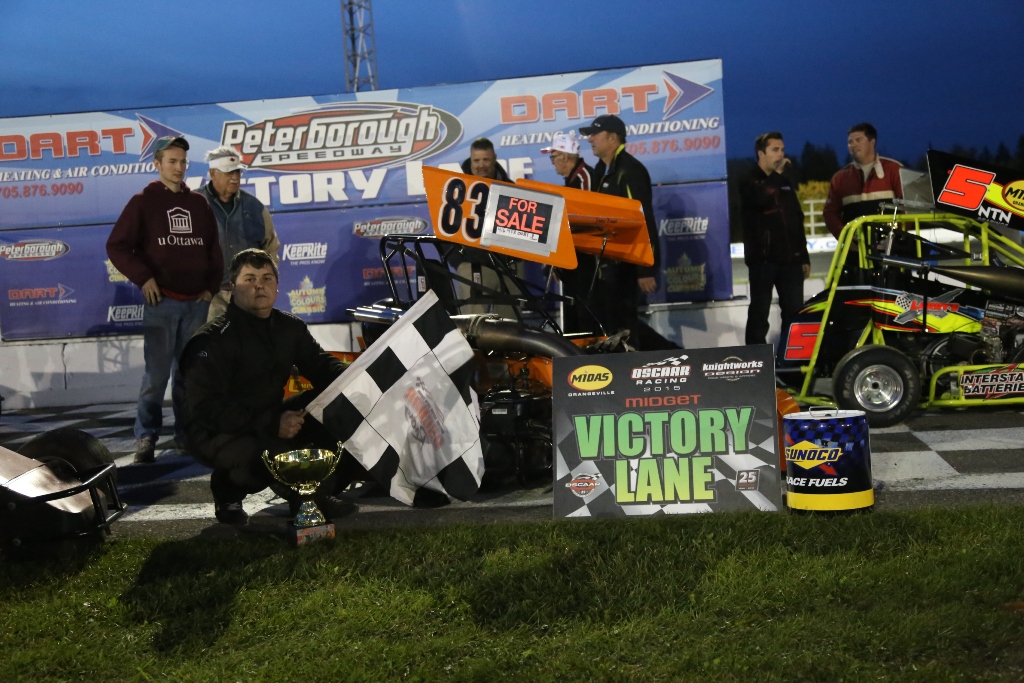 With a pass on the last lap, Jamie Bound would take the lead to score the victory in the Autumn Colours Classic at Peterborough Speedway. For Bound, it marks his seventh victory of the season in his ninth start of the year.

Jody Bound would cross the finish line in second and with two victories and nine top-fives on the season, he would be crowned the 2015 Midas of Orangeville OSCAAR Midget Champion in his first season of competition.

The fourth heat would see Elliott pull down pit lane on the opening lap. Jamie Bound picked up the win for the daily double ahead of Jody Bound, Shawn Stanley, Brian Woodland, Rogers, Van Dusen, Gallinger and DeMan.

Richard Woodland picked up the win in the fifth heat to also complete the daily double ahead of McDonald, Bradley, Lassman, Rob Summers, Vickers, Katherine Summers and Nigel.

The sixth heat started off rocky with James Stanley spinning on the pace laps. The opening lap would then see both the 31a and McCall spin on the backstretch, but both able to get back going before the caution was waved. Lawson would then head down pit road on lap six with a problem. James Stanley picked up the win ahead of Gardner, Carrothers, McKibbon, Brown, Spiez, McCall and the 31a.

The b-main would see a quick spin by Katherine Summers. Larry Lawson picked up the win ahead of Hetherton, Vickers and Gallinger to transfer to the feature. Elliott and Wilson rounded out the field to miss the show.

Jamie Bound would grab the early advantage behind the wheel of the No. 83 Skelton Truck Lines, Weatherill Performance Parts, R.P. Oil, Competition Systems and Pronto Automotive Stoufille Midget ahead of Richard Woodland and Jody Bound. Bound would then move into second on lap two ahead of Richard, Brian Woodland, Rogers and Carrothers.

Jody Bound would catch Jamie Bound, passing him on lap four to put the No. 5 Larry’s Small Engines and Midas of Orangeville Midget into the lead. Richard Woodland would continue to run third ahead of Brian Woodland, Rogers, McCall, James Stanley and Carrothers.

The problems would then start for some drivers as James Stanley would stall on lap nine on the frontstretch, while Lassman pulled off on lap 21. Despite the problems for some, the caution would not fly, leaving the Bound pair to weave their way through lap traffic.

In the later stages of the event, Jamie Bound would close the gap that Jody Bound had formed, getting beside him on the final lap with the pass down the backstretch to take the lead, and the victory.