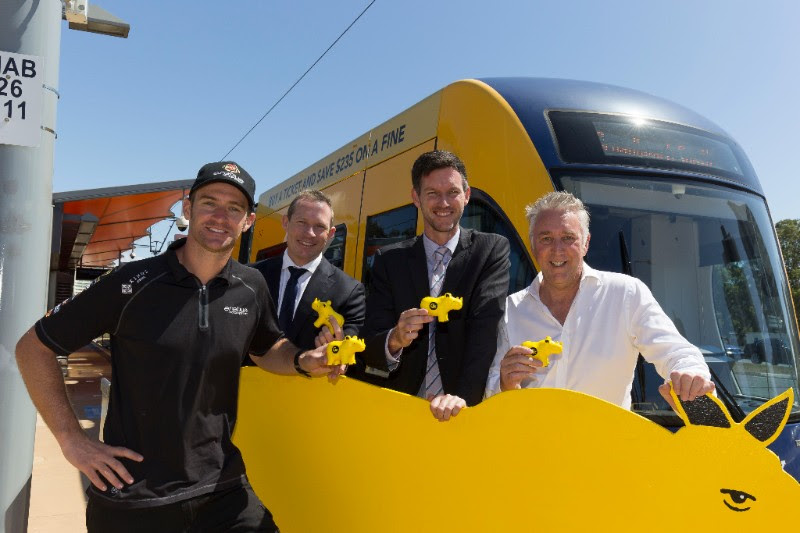 Motorsport fans are being encouraged to use the G:Link to travel to the Castrol Gold Coast 600 next weekend, with FREE public transport providing the perfect way to get to and from the race safely.

Minister for Main Roads and Road Safety, Mark Bailey made the announcement at Main Beach light rail station today, and was joined by V8 Supercars Championship driver Will Davison.

“FREE public transport is yet another reason to celebrate the Gold Coast’s biggest party next weekend,” said Minister Bailey.

“We expect this number will increase this year because of the convenience of using trams to access the event, so nobody misses a minute of the high octane action.

“The Palaszczuk Government is committed to growing tourism and events in our state, especially the Castrol Gold Coast 600 – Queensland’s largest annual sporting event.

“It delivers over $40 million to the local economy – boosting local businesses, showcases this iconic coast line to 206 million viewers worldwide, creates more than 72,000 visitor nights on the Gold Coast, with more than 33,000 people visiting Surfers Paradise from outside of this magnificent city.”

“With free travel on the G:Link included in the ticket cost – $91 for the Saturday event – including access to Cold Chisel’s concert and the incredible Stadium Super Trucks, or $121 for the entire three days of entertainment, the Castrol Gold Coast 600 offers sensational value for money,” said Mr Howard.

G:Link spokesperson Jason Ward said extra services would be running throughout the race weekend, from Friday, 23 October until Sunday 25 October.

“Services on Friday will run an extra two hours, until 9pm, Saturday will be extended until 11pm andSunday will operate until 6pm,” said Mr Ward.

“150 additional tram services will be provided across the event weekend, with trams in both directions every 6.5 minutes during peak periods”.

“What’s better, race goers will be dropped right at the gates to the event – at Main Beach station or Surfers Paradise North station.”

Mr Ward also shared the seven best tips for travelling to and from the Castrol Gold Coast 600:

1. Main Beach station may be just outside the main gates, but Surfers Paradise North station is at the southern end of the track and is much less crowded.

2. If you’re heading to the concert – just walk over the pedestrian bridge on the track side of the road across the Nerang River

3. If you have pre-purchased a ticket to the GC600, you can travel for free that day on the trams to and from the track if you have your ticket with you.

5. Buses and trams are both free for GC600 ticket holding patrons, so you can jump on either mode.

6. We’ll have extra services to help get everyone home after the race finishes, but expect a wait time of up to an hour if you’re planning on catching the tram.

First services begin on Friday October 23 and run until midnight on Sunday, October 25.

To travel free all you need is your pre-purchased Castrol Gold Coast 600 ticket or your official accreditation. Tickets purchased at the gate are only valid for free post-event travel.

Tickets to the Castrol Gold Coast 600 are available through ticketek.com.au. To plan your journey, go to the www.translink.com.au journey planner and choose GC600 as your destination.