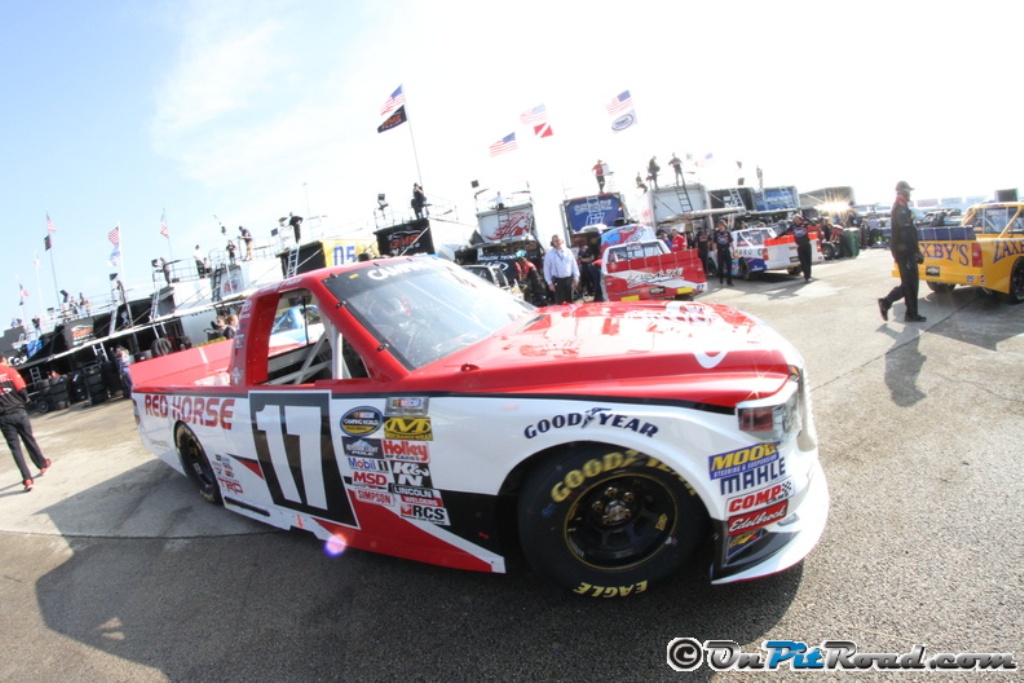 Red Horse Racing driver Timothy Peters was made available to the media at Martinsville Speedway:

TIMOTHY PETERS, No. 17 Red Horse Racing Toyota Tundra, Red Horse Racing
How happy are you to be back at Martinsville?
“It’s always a smile on my face when I come through the pedestrian tunnel this morning or anytime to be able to come here and race. After winning last week, just giving us the extra momentum and confidence coming into here – kind of looking for redemption this weekend, our Kroger 250 in the spring didn’t go as well as we would have liked. We didn’t get the finish that we wanted so really it goes back to starting at Chicago and Chicago to now with our finishes and the momentum and getting the win, really looking forward to getting on the race track this afternoon and seeing what our AutosbyNelson.com Red Horse Tundra has in speed. Hopefully we can go back to back.”

Is Martinsville a wild card race?
“I think so, I still feel like you can have a really good day and when it comes down to it something may happen not of your doing and you get involved with it and it kind of takes the result you feel like you could have gotten away from you. We’re 50 laps shorter so probably the first lap everybody might be nice and then the rest of the race is just very aggressive. That’s what you expect when you come to a great short track like Martinsville.”

What does it mean to have moved from seventh to fifth in points since Chicago?
“That’s a cool accomplishment and I’m proud of that. It just goes to show what our team is about. A lot of the guys on the team this year are new and we’ve had everything there, it’s just we haven’t hit it yet. Pocono kind of turned the corner this year, but Chicago really turned the corner and from there to present it’s just unbelievable. The guys do a great job, Triad horsepower has been great – we just hope we can keep this fire rolling. It’s so cool when you can show up to the race track and you race in the top-five and there in the closing laps you have a shot to win and then actually win and go to victory lane. Winning fixes a lot of things and momentum and confidence is key, especially coming in here for the weekend.”

How obvious is the SAFER barrier that’s been installed here at Martinsville?
“I really didn’t notice it to be honest with you. Brooks (Taylor, Martinsville PR) actually showed me the SAFER barrier and said, ‘What do you think?’ I said, ‘Well, if you hadn’t of shown me, I wouldn’t have noticed.’ The Late Model and the trucks are a little bit different. Less horsepower and stuff you don’t use much of the race track. When I get in my truck this afternoon, I’ll be able to tell a little bit more with our Tundra. As far as the Late Model, I didn’t even notice it. I tested it out, but I didn’t notice it.”

How special is the local sponsorship you have here in Martinsville?
“Barry Nelson and everybody at AutosbyNelson.com and Nelson Toyota has been extremely good to me – professionally in the Truck Series and when we’re not racing in the truck, we have a little Late Model stock car team that we go and race and we’ve had a lot of success with. You can’t discount any of the local sponsorship or the previous local people that have helped me in the past. They require just as much love as a corporate sponsor and they do just as much. I appreciate everything that they have done to get me where I’m at.”

How confident are you racing here at Martinsville?
“I think coming in here with the success that I’ve had and the laps that I have around here in a NASCAR Camping World Truck and my Late Model stock car will definitely help me today for both practices, qualifying and the race tomorrow. I got my first win here in ’09, but I was the last one not to win the clock. I really want that clock, it’s very special to go to victory lane here and that clock is very special period to have in your house to say that you’re a winner at Martinsville. The way I approach this race is the same way I approached the race at Talladega last week with patience. You can get other competitors ruffled and competitors can get you ruffled, but the first one that breaks your opponent wins. As long as you stay patient and try not to do anything to put your equipment in jeopardy, you’ll have a great finish.”