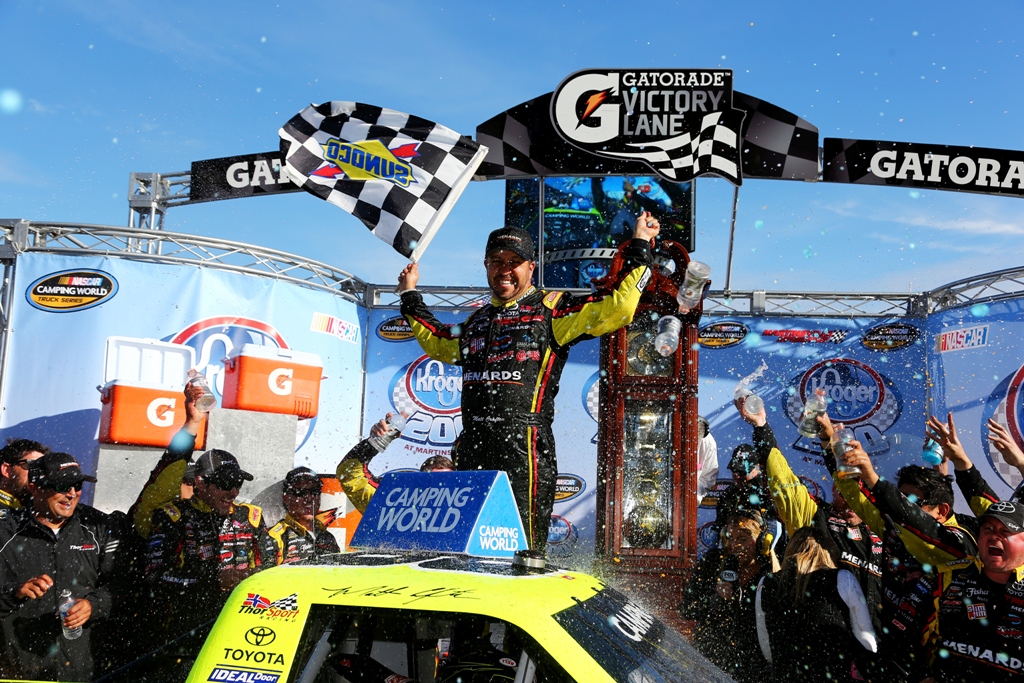 Martinsville, Va. (October 31, 2015) – Matt Crafton, driver of the No. 88 Fisher Nuts/Menards Toyota Tundra, started 13th in Saturday’s Kroger 200 at Martinsville (Va.) Speedway, led the final 63 laps in the 200-lap event, and scored his second win in 28 starts at the half-mile “paperclip.” The victory was his fifth of the 2015 NASCAR Camping World Truck Series (NCWTS) season, and the 10th of his career. The win also allowed the two-time and defending series champion to gain 13 points in the championship point standings, and is now a mere 10 points behind leader, Erik Jones, with only three races remaining in the 2015 season.
Battling a Toyota Tundra that was, “wicked tight,” throughout the race’s first 100 laps, crew chief Carl (Junior) Joiner brought the No. 88 machine to pit road twice, under caution, for four tires and fuel, at laps 35, and 122, respectively. Running inside the top-three throughout the day, Crafton was able to muscle his way around rookie, John Hunter Nemechek, on a restart, at lap 137 of 200, and never looked back. The ThorSport Racing driver went on to survive five restarts in the final 63 laps to claim his second win at Martinsville Speedway, and his fifth of the 2015 NCWTS season – a career-high for the veteran driver.
Quote:
How big is this victory with three races remaining?
“It’s very big, if you look at the last couple races – Talladega, Las Vegas – we led the most laps in both of those. I have no idea what we led today, but we led enough, and we led the right one. We’ve had very fast trucks and it’s all about what Junior (Carl Joiner, crew chief) and every one of these guys have been building and bringing to the race track. Finally, we have to finish what we started the last two weeks, and I felt that we should have won the last two. Talladega, you never know because it’s a crap shoot at the end, but we had a very fast truck. I just tried to manage my stuff, keep my nose clean, be there at the end, and just not make any mistakes.”
Notes:
ABOUT FISHER NUTS
Fisher® Nuts is a brand owned by John B. Sanfilippo & Son, Inc. (NASDAQ: JBSS), a company founded in 1922 that’s a leading processor, marketer and distributor of baking nuts, snack nuts and nut-based products that are sold in multiple distribution channels. Its products can be found under the Fisher®, Orchard Valley Harvest™ and Sunshine Country® brand names and a variety of private labels.
ABOUT MENARDS:
With 287 stores in 14 Midwestern states, Menards has the tools, materials and supplies for all your home improvement needs whether just needing a light bulb or can of paint to building a deck or new home. Menards is known throughout the home improvement industry as the low price leader; it’s no wonder their famous slogan – “SAVE BIG MONEY” – is so widely known and easy to remember. Menards does things right – the company’s strength and success can be seen in the well-stocked and maintained stores, the lowest prices in town and the way guests are always treated like family in a hometown hardware store atmosphere.
ABOUT THORSPORT RACING:
ThorSport Racing, based in a state-of-the-art 100,000-square-foot facility in Sandusky, Ohio, is the longest-tenured NASCAR Camping World Truck Series team. ThorSport, which has competed in the NCWTS since 1996, will run the No. 88 Menards Toyota Tundra driven by two-time NCWTS drivers’ champion Matt Crafton, the No. 98 Nextant Aerospace/Smokey Mountain Herbal Snuff/Curb Records Toyota Tundra driven by Johnny Sauter, and the No. 13 Cabinets by Hayley Toyota Tundra driven by Sunoco Rookie of the Year contender, Cameron Hayley in 2015.