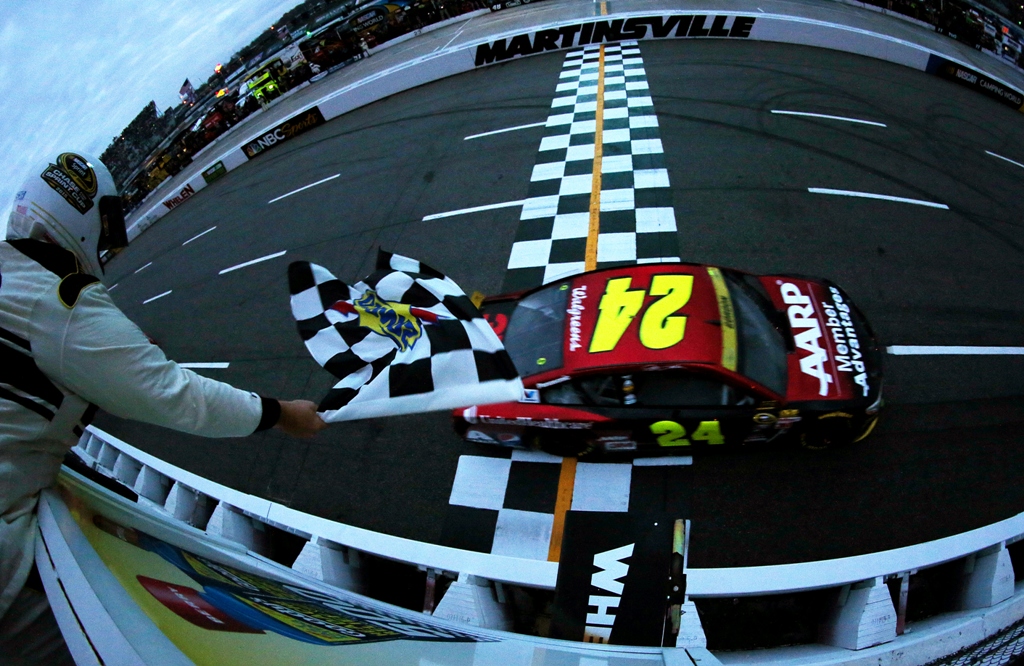 “This is turning into one of these just incredible storybook finishes to this year, to this career. Of all years, I mean, of all years, I cannot believe this. I’m so excited it’s happening in this year. That was clutch. That was huge. Yeah, we had a few things that fell in our favor. But you got to be there and be ready for that moment when it comes, and we were.” – Jeff Gordon

When the dust cleared after some late race contact, Jeff Gordon would find himself at the front in the lead. More importantly, Gordon solidifies himself as one of the four drivers fighting for the championship at Homestead-Miami Speedway. While Gordon called it the “most amazing feeling”, there was a grandstands full of fans cheering for the driver of the No. 24 as he took the checkered flag. Then, post-race, over 1/3 of the fans stuck around to watch the man that will retire at the end of the year celebrate with his team.

“I tell you there nothing better than crossing the finish line and have that kind of reaction from the crowd,” Gordon commented. “That reaction from my team and to have my family come up this is unbelievable. I feel like I’m dreaming right now. I’m afraid I’m going to wake up and this is not going to be true.”

The dream came together virtue of a series of events that began with contact ahead of Gordon between then-race leader Joey Logano and Matt Kenseth.

Gordon would then lead the field down pit road under the yellow flag with 46 laps to go, with the exception of Denny Hamlin and A.J. Allmendinger. Gordon came off of pit road first, getting by Hamlin, followed by a pass on Allmendinger with 22 laps to go. While Gordon hasn’t had the season that he has wanted, the contact up front opened the opportunity, and now there’s a window of opportunity to possibly win his fifth series championship in his last season behind the wheel.

“It’s just like we did today. We’ll grind it out,” he commented. “We’re going to give it something to think about. First, we’re going to improve our race car a little bit for Homestead. Don’t count us out. We’ve proved that during this entire Chase and we certainly proved that today. This team is fired up; we’ve got some momentum now!”

Known as the “scrappy little team that never gives up” per crew chief Alan Gustafson, Gordon and crew struggled through the summer, not scoring a single victory en route to qualifying for the Chase. They then went through the first two rounds, banking solid runs while their competition struggled to make it to the third round. The struggles this year have been so apparent that many didn’t have Gordon on their radar as a possible winner on Sunady.

“I love it that we have been under the radar,” Gordon commented. “We have just ben working on all of our team, work ethic and determination and just execution. Today we showed what we are truly capable of.”

Despite those tough moments leading up till the win on Sunday, Gordon says that they never give up.

“Well, I believe when we went through those moments and we came through it and we were still talking to each other and still smiling and communicating and trying to be better, I knew that if we could just get in this position, we could do something special,” he commented. “And man, this has turned into a fairytale year. I cannot believe it. Homestead is going to be an unreal weekend and we’re going to completely focus now. We talked about this in our meeting before the race and if we could make it through today and win, all our focus is on the Homestead car.”

“The format has changed completely, the trophy is different, the banquet is completely different, the competitors are completely different. Everything’s changed since I won a championship. It only makes it that much more meaningful to me, that it’s been this long, that it’s been in this format,” he commented. “I will say I like this format. I liked it last year, and I like it better this year. I think it suits me personally. I think it suits our race team better. It’s because of this racetrack right here that I feel that way, because this is a track that if we get here, and we had to still earn our way to this round, and we did, but I knew if we got here, we’d have a shot not only at just having a chance of winning, but even getting the points that we needed to advance and go do it over the next couple weeks.”

“Nobody is more driven and excited than this race team is right now,” he added. “Every resource we have, we’ll be putting towards what we have to do to go be competitive enough to win the championship in Homestead.”

Beyond having an opportunity to go for a championship, the win certainly has a deeper meaning for Gordon as this is his final full season of Sprint Cup Series competition as announced before the season. So while the championship battle looms ahead, tonight, NASCAR nation celebrates one of their biggest stars scoring a monumental victory, while Gordon savors the moment with his wife Ingrid and kids.

“It’s so nice to have them here,” he said. “There’s nothing sweeter than going to work, I kind of call it work, to have them and Ingrid here to experience these moments. This is what life is all about and that’s where I realize after being in the series for 23 years that it’s these moments that you’re sharing it with the people that work hard and the people that you care about the most. There is no greater feeling than that.”

Gordon added that this is one of the finest moments of his career, but not the most emotional one, yet.

“I held that back. I’ve been holding it back,” he said. “I’m not going to be able to hold it back at Homestead. I hope it’s because we’re doing something even more special than what we did here today.”