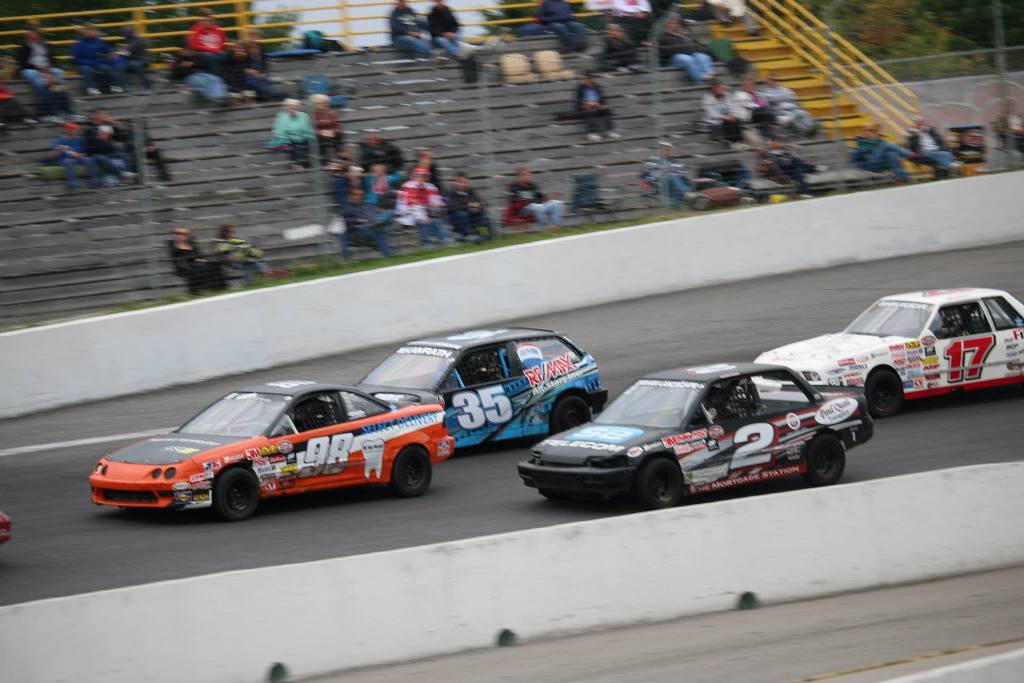 It goes without saying that each season at any track is memorable for it’s own reasons as there’s things that will always stand out in the mind of each driver, crew member, official and fan. Sometimes people will share the same moments, and sometimes people won’t. Regardless, there are always reasons to remember a year of racing.

So without further-ado, here are some of the most memorable moments of the 2015 season for the Graham Landscape Mini Stocks at Sunset Speedway.

Everybody’s focus throughout the season was on victory lane and the battle for the lead. Though each week, there was a guy quietly finishing in the top-10 on a weekly basis, no worse than sixth all season long. That guy, by the way, is named Doug Butler and he won the 2015 championship.

Butler’s pure dose of consistency over the 14 race season was an artform in itself to watch considering how deep the talent pool is. Each week, no matter where he started, he’d either stay in the top-five or work his way up there, battling hard to get the best finish possible. In fairness, he also scored a victory – August 1st feature winner.

The success doesn’t mark a surprise, as I so happily reminded everybody with the championship article in September.

Ranging from 15 to 25 cars on the track. The battles through the field going three-wide at times, sometimes three-wide three rows deep with nowhere to go. Side-by-side racing for positions throughout the whole feature. Throughout that time, not one bit of contact over the course of the 25 laps.

Kyle easily brings up one of the biggest things and one of the reasons why everybody tuned into the division – their ability to put on a show. Arguably, the Mini Stocks had the best features of the season on select nights throughout the year and got everybody talking about what they did in the week that followed. The method to the madness? Atleast seven to eight drivers that could win the feature any given night, close in speed, all about having a good battle for the win.

Well the Limited Late Models and Super Stocks continued to get recognized as top-tier classes at Sunset and other tracks, it’s time that the Mini Stocks also get their share of recognition for what they can produce. Well done to everybody!

Sometimes when it comes down to favourite races, it’s about the battle for the lead and top positions that led to the end that makes it memorable. Though in the case of Brandon McFerran and the Velocity 250, the emotions of victory lane made this a moment to remember. The emotions for McFerran hit their edge in victory lane as the 16-year-old division star’s grandpa passed away earlier in the week. One glance at the victory lane interview brings it all into focus.

Beyond the emotions of the moment, this marked McFerran’s first victory in the crown jewel event at Sunset Speedway after coming close other seasons. Certainly a mark as he looks to move up in 2016.

After winning the season-ending Velocity 250 event in 2014, Jordan Howse entered the 2015 season as one of the early championship favourites. It didn’t take long for that to show through as he was a front running contender on a weekly basis, as evident by the “season by the numbers” article released last month. Just off the top, Howse led the division in number of feature wins (five) and heat wins (seven).

Though as the headline dictates, it was a season of both highs and lows. While he had the highs of victory, it was contact with the wall on August 15 that resulted in a DNF for Howse, and ultimately was the difference between him being the series champion and finishing second in points.

Even with the disappointment, Howse certainly can leave the season behind with a smile on his face as he showed everybody that he is one of the strongest drivers in the province, and a youngster that we have to watch moving up through the ranks. Like McFerran, Howse is planning on moving up in 2016.

Speaking of high and lows of 2015, Howse wasn’t the only driver who experienced both ends of the spectrum in a cruel way. Anybody looking back on the 2015 season will recall the story of blown motors and a certain driver.

Let’s face it – Andy Kamrath is one of the fastest five cars at Sunset Speedway, some nights clearly the fastest drive there. It’s no secret the success that he has had with the No. 35 Honda Civic in winning some of the crown jewel events at Sunset Speedway, and notably other tracks as well. He showed that at Sunset Speedway this year once again, leading laps and running up front on a weekly basis – highlighted by three victories on regular points nights this year. Certanly there was success had that will be remembered moving forward.

But, on the opposite end of the spectrum, the summer was very cruel one – yes, I’m speaking of those pesky motors. Three blown motors in the span of four races, including two motors in a single weekend. It seemed that the mechanical gods and Kamrath couldn’t get along in early August, at all.

Like I said, though, he’s fast – and we know that’s half of the battle. So hopefully as we head into 2016, we can get rid of the pesky issues and put those in the rearview.

Fan Submitted Memory – Believe it was June 13th, had the race long side-by-side battle between McFerran and Paxton – Kyle Sedan

When you can have a battle for the lead that lasts say five, 10 laps – it’s awesome and makes short track memories.

When you can have a battle for the lead that lasts the entire 30 lap feature – that’s spectacular.

On June 13, the fans at Sunset Speedway were treated to a “spectacular” battle for the lead as starting at the front of the field, Brandon McFerran and Warren Paxton would battle side-by-side for the lead all feature race long in the caution-free 25 lap feature. Remember how we mentioned the great battles of the division earlier? This is one that certainly stands out among itself.

The race was well-received by the fans in the grandstands, and also applauded by both drivers in the respect shown back and forth to each other.

“I was worried, to be honest,” McFerran commented in victory lane. “If I would’ve slipped up once, he would’ve been gone. I was just running a clean race; he was running a clean race – that’s how racing should be. I’d race against that guy every day of the week, if I could.”

What makes the off-season go by easier? Watching some old races. With that in mind, have a view of this spectacular race for the lead yourself.

Beyond the moments here, there are certainly many more that I could talk about, including some thrilling battles that we haven’t touched on and other driver successes. If warranted, a part two of memorable moments could be released following the other division articles.

However, beyond this, I want you to have a say as well. Comment with your favourite memorable moments from the season. What is something that perhaps has slipped my mind that you can’t seem to forget?