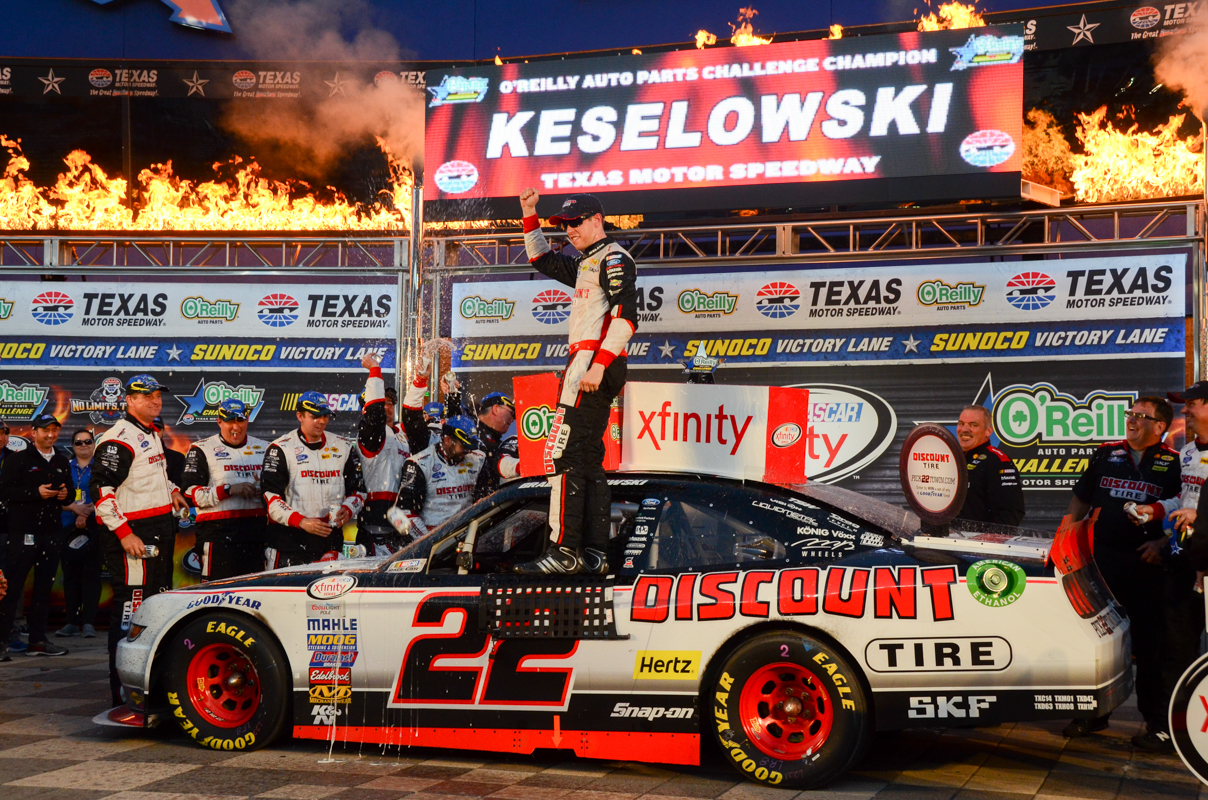 After taking the lead with 11 laps to go from Austin Dillon, Brad Keselowski would lead the rest of the way, including holding off a late race challenge from Kevin Harvick.

“That was a heck of a battle with Austin there; he’s a heck of a driver,” Keselowski commented in victory lane.

Throughout the whole race, different drivers would find themselves leading the event. Starting from the second spot, Keselowski would lead till lap nine when he was passed by pole sitter Austin Dillon. Dillon would hold the advantage through the beginning portion of the event, till Kyle Busch took the lead at lap 58, followed by Harvick leading at lap 61. Harvick would lead till he had a loose wheel following a pit stop under caution at lap 78, which handed the advantage over to Keselowski. Keselowski would then lead till he was passed on pit road by Kyle Larson during a round of pit stops at lap 115.

Larson would then lead all the way through the final set of pit stops, till he had a left rear tire blow with 25 laps to go, tearing apart and resulting in a spin. Larson would have to take his car behind the wall with damage.

“We had a tire rub from travel in the left rear all race long and that run didn’t have any smoke in the cockpit so I wasn’t even thinking about,” Larson commented. “We made 175 laps in the race and were expecting that. its just our luck this year. it seems we have been fast in both series throughout the race and something happens in the later half. I thought we were going to get a win, but it’s not going to happen. But thanks to everyone that helps out so I can have fun.”

Harvick would take over the lead virtue of Larson’s issues, but lost it on pit road, falling back to third as he was beat off by Dillon and Keselowski. Dillon would fire off good on the restart, but Keselowski would chase him down and make the pass with 11 laps to go. Despite Harvick closing the gap as the laps wound down, it wouldn’t be enough to catch Keselowski.

“It just changed throughout the race,” Keselowski said. “The 88 looked like he’d run away with it – then the 54 had issues, and then the 42 had issues. It was just a funky race to be apart of with everyone having issues. We just stayed there and were able to be there at the end.”

After battling at the front early in the race, Busch would finish 14th after battling through a broken shifter rod issue during the final three-quarters of the event.

The NASCAR XFINITY Series will return to the track next Saturday at Phoenix International Raceway.