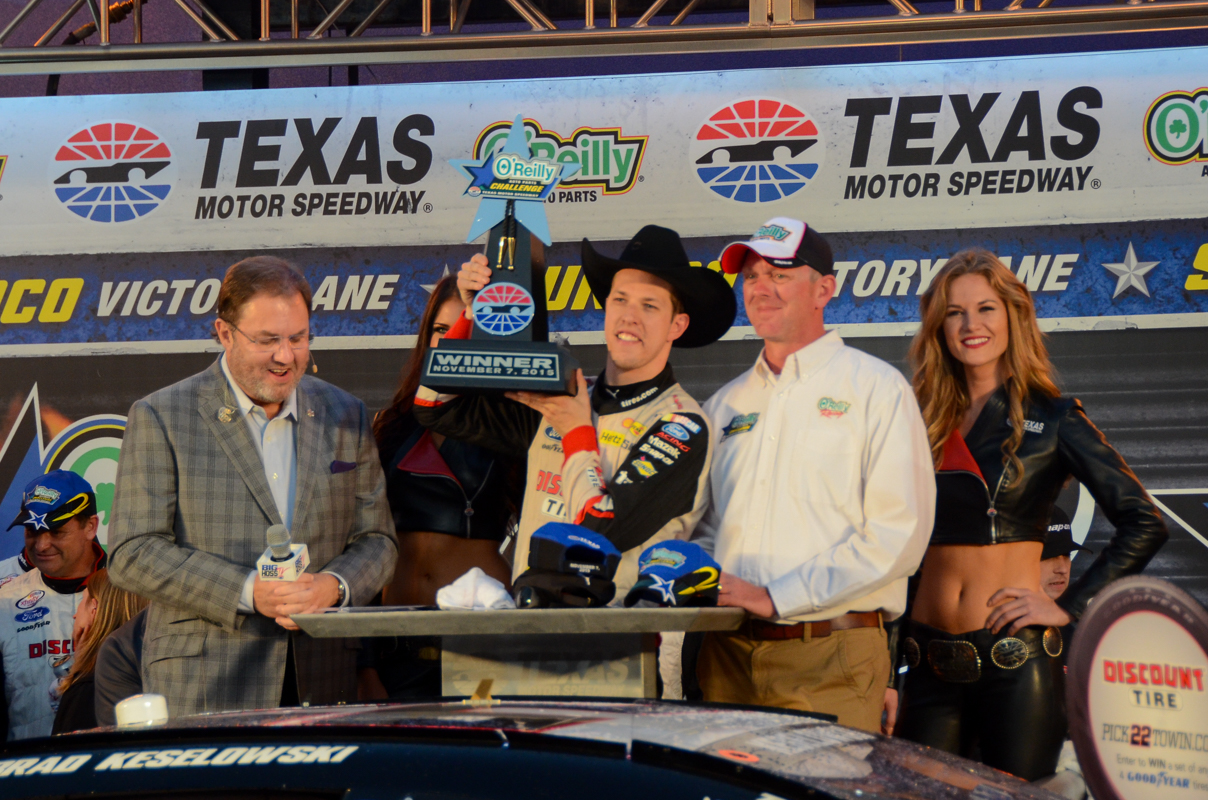 With Brad Keselowski scoring the victory on Saturday afternoon at Texas Motor Speedway and Kyle Busch placing the No. 54 in the 14th spot, Keselowski would clinch the Owner’s Championship for Team Penske and the No. 22 Discount Tire Ford as Penske led Joe Gibbs by 98 points following the event.

“We are really excited to be here today doing that,” Mike Nelson, Vice President of Operations for Team Penske, commented. “We weren’t sure at the end there, it took us a couple minutes to figure it out but it is a tribute to everyone at Team Penske and we really appreciate Brad, Joey Logano, Ryan Blaney and Alex Tagliani for sitting in the seat and getting the job done. We are happy we have a little less pressure going into the last couple of races.”

While the drivers get points towards the driver’s championship, the car owner also receives points towards each of their individual entries. The No. 22 received owner’s point virtue of Keselowski sharing the ride with Joey Logano, Ryan Blaney and Alex Tagliani this season.

“For today, I am really proud of the effort not just today but all season long to get my team owner Roger Penske his fourth XFINITY Series owners’ championship,” Keselowski commented. “That is a big step. I was thinking about it when I came to Team Penske in 2010 we didn’t have any and now we have four XFINITY championships in five years. That is a huge accomplishment and a lot to be proud of.”

Keselowski won the race virtue of passing Austin Dillon with 11 laps to go and holding off Kevin Harvick en route to the checkered flag.

“The race today, breaking that down it was one of those races that seemed like it could really fall any way,” Keselowski commented. “The 42 (Kyle Larson) was really fast and the 88 (Harvick) was really fast. I am sure had the 54 (Busch) not had trouble would have been tough to beat. And of course Austin Dillon ran away with it at points and got the least in the last sequence and I knew he was going to be tough to beat. It wasn’t a gimme race by any stretch of the imagination. We had to earn it and we did just that with a strong, consistent day.”

For Keselowski, he has scored two victories and seven top-fives in eight starts this year, including boosting an average finish of second in his last six starts. Keselowski is scheduled to be back behind the wheel of the car at Phoenix International Raceway next weekend. Logano ran 11 races this year, scoring four wins and 10 top-10s, while Blaney scored two wins and nine top-10s in 12 starts. Lastly, Tagliani ran Mid-Ohio, finishing second after getting bumped out of the way on the last lap.

For Greg Erwin, it marks his second straight championship with the organization as he crew chiefed for the No. 22 team last season, as well.

“I am just blessed to be a part of this thing and have guys with his kind of talent behind the wheel because that is really what makes it roll,” he said. “When we told him it was time to go and there were only about 15 or 16 laps to go, you could really see it. The thing lit up. It was a good day. I am very, very happy.”