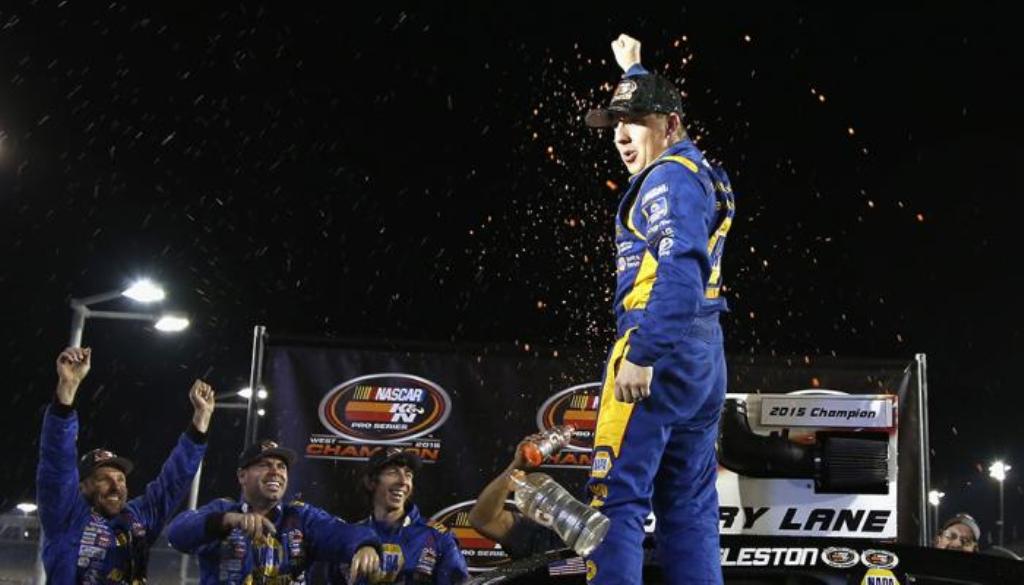 Eggleston came home 10th in the No. 99 NAPA Filters Toyota in the season-ending Casino Arizona 100 to put the finishing touches on the 2015 title run.

Todd Gilliland won the race in his first career series start to become the youngest winner in series history. The Sherrills Ford, North Carolina, who turned 15 in May, is son of the NASCAR Sprint Cup Series driver David Gilliland, and drove the No. 54 Frontline Enterprises Toyota to the same Victory Lane his dad did in the series 10 years ago.

Sixteen-year-old JJ Haley won the pole award and had his No. 05 Braun Auto Chevrolet out front for 94 laps before a cut tire ended his shot his first series win. That turned the opportunity at history over to Gilliland.

And it was Eggleston, the 26-year-old from Erie, Colorado, who added to that lineage.

Eggleston made three starts with Bill McAnally Racing last year. His first race came at his home track, Colorado National Speedway, and resulted in his first career NASCAR victory. That led to two more starts — Iowa and Phoenix — and the relationship blossomed into a full season schedule in 2015.

Eggleston entered the final with just a four-point lead over Sunoco Rookie of the Year candidate Noah Gragson, and had another pair of rookies Gracin Raz and Ryan Partridge within 12 points on him. Eggleston was not eligible for the series’ rookie of the year honors because he had run six NASCAR Camping World Truck Series races between 2010-2014.

But Eggleston did what he needed Thursday: Keep his challengers in the rear-view mirror. After qualifying 15th — second behind Partridge among contenders — he passed Partridge before the halfway break and kept his car out of trouble while picking off positions.

Gragson finished 12th and wound up seven points behind Eggleston in the final championship standings (512-505). Partridge was 11th and finished with 499 points, while Raz suffered from a motor issue, brought it home 27th and ended 10 points behind Partridge.

Todd made it three generations of Gilliland as race winners in the series. His grandfather, Butch, won 13 races in the West, while his dad won four — including the 2005 race at Phoenix. At 15 years, 5 months, 28 days, Todd Gilliland broke the mark set by Gray Gaulding (15 years, 8 months, 30 days) in 2013 as youngest winner in series history.

The Casino Arizona 100 will air on NBCSN on Thursday, Nov. 19 at 7 p.m. The race was carried live on MRN Radio.

Eggleston and the rest of the top NASCAR K&N Pro Series East drivers will be honored at the NASCAR Night of Champions Touring Awards at the Charlotte Convention Center/NASCAR Hall of Fame in Charlotte, North Carolina, on Saturday, Dec. 12.