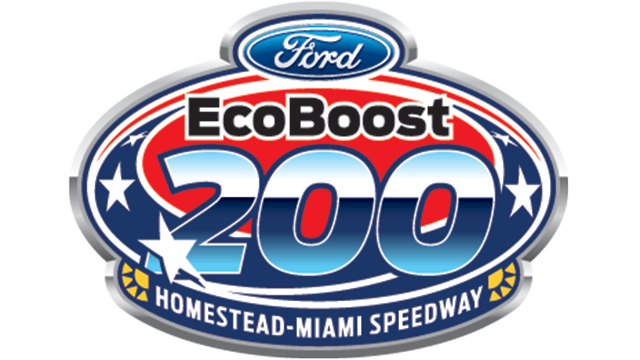 Sandusky, Ohio (November 17, 2015) – Although a third-consecutive NASCAR Camping World Truck Series (NCWTS) driver’s championship title is unlikely for Matt Crafton, driver of the No. 88 Ideal Door/Menards Toyota Tundra in 2015, the ThorSport Racing driver can characterize his season as a success. Entering the final race of the 2015 season, Crafton has claimed a season-high three poles (Michigan International Speedway, Las Vegas Motor Speedway, and Texas Motor Speedway), led a career-high 678 laps, and earned a season-best five wins (Atlanta Motor Speedway, Kansas Speedway, Texas Motor Speedway, Kentucky Speedway, and Martinsville Speedway). In fact, Crafton has earned half of his 10 career wins in 2015.
In addition to his success in 2015, Crafton will once again make history in Friday night’s NCWTS 200 at Homestead-Miami (FL) Speedway. The two-time and defending series champion, has spent 15 full-time seasons in the NCWTS to date, and will make his 361st career start in the series Fridaynight, passing four-time NCWTS champion, Ron Hornaday, Jr., in career starts. Currently, both Crafton and Hornaday are tied with 360 starts.
Of the 360 starts that Crafton has made since 2000, the Tulare, California native has made 14 starts at Homestead, site of Friday night’s NCWTS season finale. Although Crafton is still looking for his first win at the 1.5-mile oval, a type of track the Menards driver has dominated on in 2015, the ThorSport Racing diver has lead 38 laps en route to two two-five and six top-10 finishes, with a track-best start of second (2004), and a track-best finish of second (2009). Furthermore, among active series drivers, Crafton has the most starts (14), is tied for the most top-five finishes (2), has the most top-10 finishes (6), has completed the most laps (1917), and has the most lead lap finishes (10).
With nothing to lose, and everything to gain, don’t count out Matt Crafton and his No. 88 ThorSport Racing team from victory lane on Friday night.
Sounding off – Matt Crafton:
“Both corners are pretty much similar shape-wise at Homestead, but there is a pretty big bump down in Turns 3 and 4, right up against the wall, right where you have to run. I really love going there. The difference in banking, for the different racing lines, is a lot of fun to race on. Plus, the side-by-side racing there is phenomenal.”
News & Notes:
Crafton’s NCWTS stats at Homestead:
Matt Crafton’s 2014 Highlights:
Crafton’s Career Truck Series Stats:
Race Information:
Date: Friday, Nov. 20, 2015
Time: 8:00 p.m. ET on FOX Sports 1
Track Details: 1.5-mile oval
Distance: 134 laps/201 miles
ABOUT IDEAL DOOR:
Since 1963, Ideal Door has been an industry leader in sectional garage doors and the preferred choice of home owners, architects and builders for their current and future door needs. For more information, visit: www.idealdoorgaragedoors.com
ABOUT MENARDS:
With 287 stores in 14 Midwestern states, Menards has the tools, materials and supplies for all your home improvement needs whether just needing a light bulb or can of paint to building a deck or new home. Menards is known throughout the home improvement industry as the low price leader; it’s no wonder their famous slogan – “SAVE BIG MONEY” – is so widely known and easy to remember. Menards does things right – the company’s strength and success can be seen in the well-stocked and maintained stores, the lowest prices in town and the way guests are always treated like family in a hometown hardware store atmosphere.
ABOUT THORSPORT RACING:
ThorSport Racing, based in a state-of-the-art 100,000-square-foot facility in Sandusky, Ohio, is the longest-tenured NASCAR Camping World Truck Series team. ThorSport, which has competed in the NCWTS since 1996, will run the No. 88 Menards Toyota Tundra driven by two-time NCWTS drivers’ champion Matt Crafton, the No. 98 Nextant Aerospace/Smokey Mountain Herbal Snuff/Curb Records Toyota Tundra driven by Johnny Sauter, and the No. 13 Cabinets by Hayley Toyota Tundra driven by Sunoco Rookie of the Year contender, Cameron Hayley in 2015.