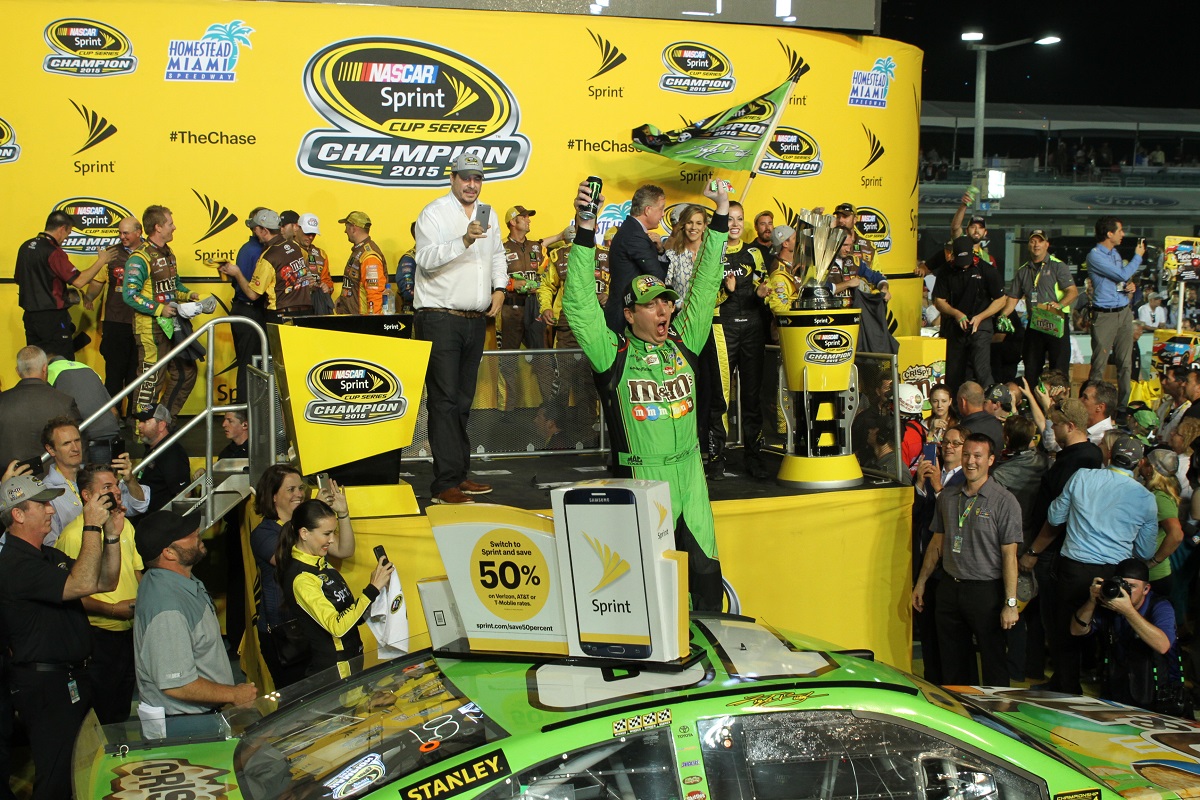 When Kyle Busch broke a leg and foot back at Daytona in an XFINITY Series crash, everybody wrote off his shots at a championship – except Busch and his team.

He came back mid-May, completing the requirements to qualify for the Chase – top-30 in points, four wins with three in a row. He then performed throughout the Chase to make it to the final round. Busch completed the puzzle on Sunday night at Homestead-Miami Speedway, scoring the victory to win the 2015 Sprint Cup Series Championship.

“It’s pretty unbelievable! A dream of a lifetime, a dream come true and something that only happens every so often,” Busch commented in victory lane. “I just can’t believe with everything that happened this year and all the turmoil, all the things that I went through, that my wife (Samantha) went through and the people that are around me went through. This championship is all for these guys, my wife, my family, everyone who has had to sacrifice so much to get me here to this place today, whether it was on my team right now, or on my teams in the past.”

With the laps winding down, Brad Keselowski held down the lead with Kyle Larson closing in as Busch ran third ahead of Kevin Harvick. The caution would then fly with 11 laps to go for debris, bringing the leaders down pit road. Keselowski would win the race off pit road ahead of Busch, Larson and Harvick. Starting on the outside, Busch would get the lead through turns one and two to seize the lead with seven laps to go, leading the rest of the way.

“It’s really awesome, awesome, awesome – I can’t thank M&M’s enough,” Busch stated. “M&M’s Crispy is a phenomenal sponsor – I love the family, they are so great and with us here today. This is a long time coming for them. They’ve been in this sport two, maybe three times as long as I have been here and this is their first opportunity for a championship.”

The Chase for the Championship would come down to a battle between Busch, Harvick, Jeff Gordon and Martin Truex Jr. Harvick would finish the race in the second spot after battling inside the top-five throughout the race.

“We were definitely a little bit off tonight, and we just kept throwing stuff at it, and we never really found anything that really helped the car that was like, oh, man, that’s what we needed right there,” he commented. “I thought there at the end that the restart, we might do a little better than that, but obviously either the splitter was on the ground or the car was just tighter than it probably needed to be, and just I couldn’t hustle it and got it tight and got it up the racetrack and got behind.”

Jeff Gordon would finish sixth in his final start in the Sprint Cup Series as he gets set to retire from competition after winning four championships and 93 races.

“I’ll be honest, you know, the competitor in me got a little bit just so caught up in the moment of the race where we took the lead and I got really excited, and I thought, okay, we’ve got clean air, let’s see what we have, and I knew we needed a few adjustments,” he said. “The track was really slick. I actually felt like when I got ahead of Kyle that we actually pulled away from him. I kind of got excited and got my hopes up there, but then Kevin started coming on pretty strong, and then we had that restart, and you know, I knew when those guys got by me I just didn’t quite have what they had. I was just lacking a couple little things.”

Martin Truex Jr. struggled throughout the night to find the perfect handle on his car en route to finishing 12th.

“Obviously a little disappointed in the way we ran this weekend, just never could really never could quite hit on anything to get the car to do the things we needed it to,” he said. “Not from a lack of effort. The guys really put a lot of effort into bringing this car here and really throughout the weekend we tried a lot, and we worked really hard on it.”

While the focus was on the championship contenders, the Penske Racing teammates ended their year on a high, as Brad Keselowski finished third with Joey Logano fourth. Larson would round out the top-five.

The final race for Michael Waltrip Racing didn’t go as Clint Bowyer hoped as he would bounce off of Ty Dillon, spinning and colliding with Dale Earnhardt Jr., while collecting a bunch of others. Bowyer was unable to make the repairs, finishing 43rd.