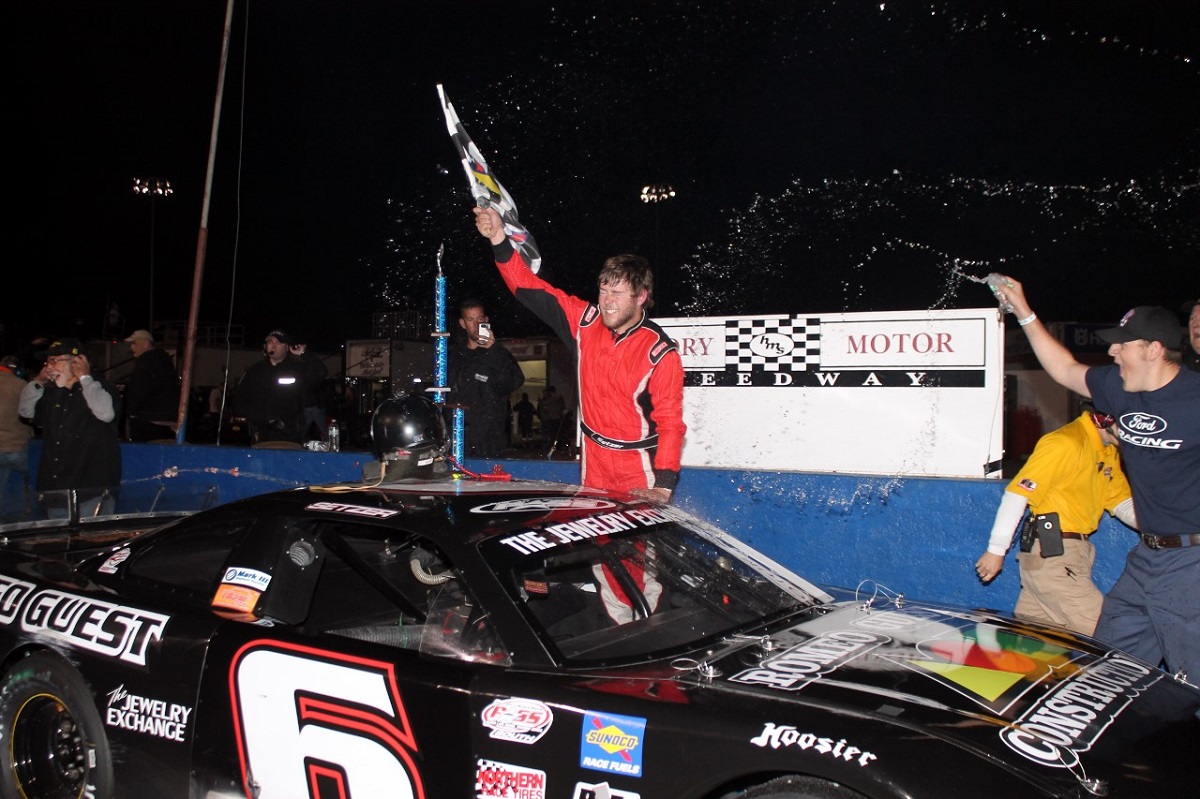 “Man it’s so awesome to get this win in front of the hometown crowd, I’ve got so many sponsors and family and friends here, I’ve just got to thank everybody so much,” said Setzer in victory lane.  “Mike Hopkins drove a great race and his stuff stayed together way better than I thought it would in the first half.  He [Hopkins] pushed me really hard there, that’s all I had, and Tyler [Church] there at the end too, but you know this thing had enough.”

While Setzer was celebrating his first career win, third generation racer Tate Fogleman soldiered home to a tenth place finish to secure his first career PASS South Super Late Model championship.  At 15-years-old, Fogleman becomes the youngest driver to ever win a PASS Super Late Model championship.  By following his father, Jay, as a series champion, they join Mike and Ben Rowe as the only father-son combination to ever win a PASS title.  Zane Smith saw a big points lead evaporate late in the season due to late season penalties.  Smith was fined for jumping a late restart at South Boston Speedway in August.  That paled in comparison to a huge points and monetary penalty assessed after an event at Greenville-Pickens Speedway in October in which Smith intentionally spun race winner Joey Doiron after the checkered flag, destroying Doiron’s machine. Smith’s collapse late in the year played into Fogleman’s hand and paved the way for him to win his first title.

“I just can’t thank the guys enough, I’m lost for words,” said an emotional Fogleman afterwards.  “I could feel my heart beating there, it definitely got hairy there at the end a couple of times.  In the beginning we got into a good spot and just saved tires, but in the second half the car got tight.  We were right in the middle of everything but luckily everybody got spread out and we could just ride there.”

In qualifying, defending PASS South Super Late Model champion Tyler Church took the quick qualifying time with a lap of 14.802 seconds.  But, in the top 10 qualifiers redraw, he would pull the 10th pill, while Derek Scott, Jr. and Joey Padgett would move up to the front row.

When the race got underway, Scott jumped out into the lead.  Championship contender Zane Smith started 27th, but made his way around Kody Evans for 15th on lap 48. The first caution of the night waved on lap 54 when Jeff Batten slammed the turn three wall.  The next caution waved just three laps later for a grinding crash by Kyle Desouza into the turn one wall.

On the restart, Setzer moved by Scott to take the lead for the first time of the afternoon.  But, following a caution for the stalled car of Joey Padgett on lap 69, Scott moved around Setzer to reassume the lead.  Smith was continuing his climb to the front, moving by Fogleman and into the top 10 on lap 73.

After starting fifth, Maine’s Mike Hopkins was the car on the move, passing Setzer for second on lap 75 and then Scott ten laps later after a hard battle for the lead.  Church was biding his time as well, moving around Clay Rogers and into the top five on lap 92.  Hopkins was the leader at the competition caution on lap 120 over Setzer, Roger Lee Newton, Scott, and Church.

Following a 10 minute break to change tires and make adjustments, Hopkins continued to lead over Setzer and Church, who made his way by Scott for third on lap 130. With 61 laps to go, the complexion of the championship changed when Smith spun entering turn one after checking up for Scott and Newton as they slowed to pass the lapped car of Evans.  Smith lost a lap, but would eventually fight his way back to a sixth place finish.

On the restart, Setzer bypassed Hopkins for the lead.  A great battle ensued for the top spot as Setzer, Hopkins, and Church raced inches apart with 30 laps to go.  The caution would wave two more times as Ben Rowe and Clay Rogers both had single car spins in turn four, just in front of the points leader Fogleman.

Setzer continued to lead, while Hopkins and Church tussled over the second spot.  The two raced hard and eventually made contact entering turn three, sending Hopkins for a spin with 14 laps to go.

Once back under green, Setzer checked out for his first Mason-Dixon Meltdown win over Church, Newton, Brandon Ward, and Jody Measamer.  Rounding out the top ten were Smith, Rogers, Vinnie Miller, Kodie Conner, and Fogleman.

The PASS South Super Late Models will return on Saturday, February 6, 2016 to kickoff the season at Greenville-Pickens Speedway with the return of the Winter Meltdown.