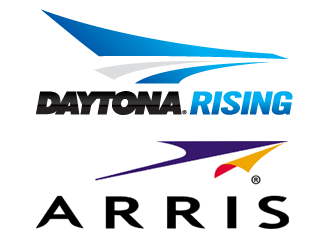 Daytona International Speedway (DIS) is pleased to announce several new technology enhancements as part of the unprecedented $400 million DAYTONA Rising redevelopment project that will help fans get and stay connected to the latest motorsports information and news. Just in time for Speedweeks 2016, fans will soon be able to connect to Wi-Fi at DIS with the help of ARRIS Group, Inc. (NASDAQ: ARRS), a global telecommunications technology leader. In addition, fans will get to experience a new and improved mobile app, as well as interactive engagement stations to help guide them around the new motorsports stadium.

“In our ever-connected world, consumers expect to be able to interact with their social circles and share their experiences in real-time from anywhere, and we are certainly seeing the same in motorsports,” said Daytona International Speedway President Joie Chitwood III. “Bringing an unprecedented level of connectivity to DIS and motorsports in general was a non-negotiable when we began DAYTONA Rising, and we’re excited to work with ARRIS to help us accomplish this goal.”

ARRIS will provide Wi-Fi access to some of the most high traffic areas of DIS to offer fans more connectivity than ever before. Through a multi-phased rollout, fans will be able to log in throughout the concourses and neighborhoods in the nearly mile-long frontstretch. Fans in the Midway and Sprint FANZONE will be able to connect to the ARRIS network as well. This installation will be complete in time for Speedweeks 2016 with additional areas of the property gaining Wi-Fi access later in the year.

“ARRIS is providing high-speed Wi-Fi to Daytona—making it possible for fans to share, post and stream their experiences on race weekends,” said Ron Coppock, President, Worldwide Sales and Marketing at ARRIS. “DAYTONA Rising redefines the NASCAR experience, and we’re proud to support this vision. Our network technology and services will bring fans’ experiences to life in and around the track, while they continue to transform the crucial communications link between drivers and crews.”

In addition, a brand new version of the DIS mobile app will launch by the end of January to help fans take full advantage of the amenities and offerings that the new motorsports stadium will provide. The updated app for iOS and Android devices will include several exciting mobile features such as Bluetooth-based indoor and GPS-based outdoor turn-by-turn navigation, location-based proximity engagement, and the ability to drop pins to remember certain locations like your parking spot powered by SPREO Indoor Location Solutions. It will also include an interactive GPS facility map and dynamic experiences with DIS Founding Partners in each of the new injectors/entrances. The update will also offer a customizable daily schedule, advanced notifications and the convenient ability to stay up-to-date with DIS Facebook, Twitter and RSS News feeds. The update for the DIS app will be available on iOS and Android platforms, and is free to download.

Finally, DIS will unveil its new DAYTONA Rewards Stations. These engagement locations will be positioned throughout the stadium and will provide fans with fun ways to interact with DIS and its partners while at a race. To participate, fans will only need to a complete a one-time registration in which they will be issued a unique QR code. Using that code, fans will be able to play games, see photos and videos, win prizes and more. The system will also be fully integrated into the updated app to provide one unified mobile experience for fans.

ARRIS Group, Inc. (NASDAQ: ARRS) is a world leader in entertainment and communications technology. Our innovations combine hardware, software, and services across the cloud, network, and home to power TV and Internet for millions of people around the globe. The people of ARRIS collaborate with the world’s top service providers, content providers, and retailers to advance the state of our industry and pioneer tomorrow’s connected world. Together, we are inventing the future. For more information, visit www.arris.com.

Race fans can follow the progress of the DAYTONA Rising project by visiting www.DAYTONARising.com and connecting with Daytona International Speedway on Twitter, Facebook,Pinterest, Instagram and YouTube. Also, fans can see the construction project up close by taking one of the daily tours available at the Speedway on non-event days throughout the year. Visit www.daytonainternationalspeedway.com/tours or the Speedway Ticket and Tours Building for more information. For tickets and more information on Daytona International Speedway events, visit www.daytonainternationalspeedway.com or call 1-800-PITSHOP.