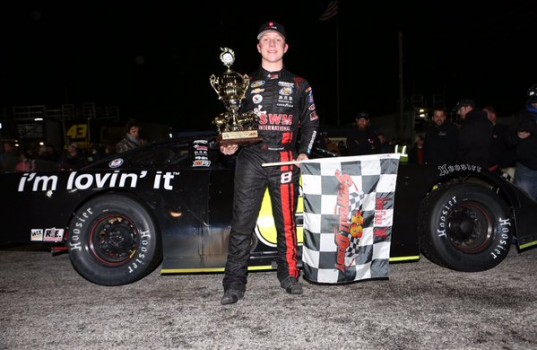 During the last few runnings of the Snowflake 100, John Hunter Nemechek admittedly allowed his bravado to get the better of him, eschewing the advice of father and NASCAR fan favorite Joe Nemechek.

John Hunter Nemechek and his No. 8 Pro Late Model dominated the Allen Turner Hyundai Snowflake 100 on Saturday at Five Flags Speedway, adding another trip to Victory Lane at the famed half-mile asphalt oval to his resume.

The reigning Snowball Derby champion, Nemechek looks to successfully defend his title this afternoon and go for an unprecedented weekend sweep at the 48th running of short-track’s pinnacle race.

He’d be the first driver in the event’s long distinguished history to win both the Snowflake 100 and the Snowball Derby in the same season.

“This is the first step of the week,” Nemechek said. “It’s definitely awesome to win the Snowflake 100 — winning anything during Snowball week feels great. I can’t thank all my guys.”

In past editions of the Flake, Nemechek didn’t adhere the instructions of his father, who preached patience.

Not this time around. Nemechek took the lead from pole sitter Justin South on Lap 1. While he briefly surrendered the lead back to South on Lap 27 of 100, Nemechek reclaimed the advantage three laps later and never looked back.

“I had to be patient,” Nemechek said. “I didn’t listen the last two years, and it didn’t work out. This means a lot.”

The biggest impact, beside the victory, was how convincingly he dictated the race. Chase Elliott — a three-time Flake champion, 2011 Derby champion and the 2014 NASCAR Xfinity Series champion — never inched close enough to Nemechek to provide the race with some much-needed tension.

Elliott finished as the race’s runner-up and Auburn University student Brett Holmes, a Talladega, Ala., native opened some eyes with a third-place finish.

“We tried our best, but John Hunter ran a good race, and we just came up short,” said Elliott, who will start second in today’s 300-lap Derby to pole sitter and track record holder Ty Majeski (16.120 seconds).

“I don’t exactly think of myself as a veteran, but (Five Flags) is a special place for me. There’s a lotta great group of drivers that are here all year long. We were a little short tonight, but hopefully we can put on a better show tomorrow.”

Despite some terrific nose-to-tail racing early on, the race was plagued by a slew of early cautions. Six yellows flew in the first 34 laps, in addition to three red flags.

But the race was green for the final 61 laps. That didn’t necessarily make Nemechek’s run to his eventual second checkered flag in as many seasons at Pensacola’s high banks.

He began to deal with a slew of lapped cars around Lap 84. Nemechek deftly navigated his way through, including splitting two cars in a three-wide puzzle coming out of Turn No. 4.

“I was definitely glad to see all those green laps,” Nemechek said.

As were Holmes and Kenzie Ruston.

Ruston, a female driver originally from El Reno Okla., easily made the biggest move of the night when she worked her way back from three laps down and finished fourth.

Ruston, the first female to win an ARCA race and who regularly competes on the NASCAR K&N East Series, was one time three laps down.

She benefitted from several lucky dogs and then began chewing up spots left and right, shooting through the field like a rocket ship.

Holmes, who was the Montgomery Motor Speedway PLM track champion, continues to impress against a stacked 36-car field Saturday.

He started a distant 18th, but contended in the top-10 all night before coming home with his first-career podium finish during Derby weekend.

“I’m glad we could contend in the top three,” Holmes said. “I wish we could’ve gotten a couple positions up, but what can you say? This is pretty cool to finish third at the Snowflake.”

A first is even cooler. Just ask John Hunter Nemechek.