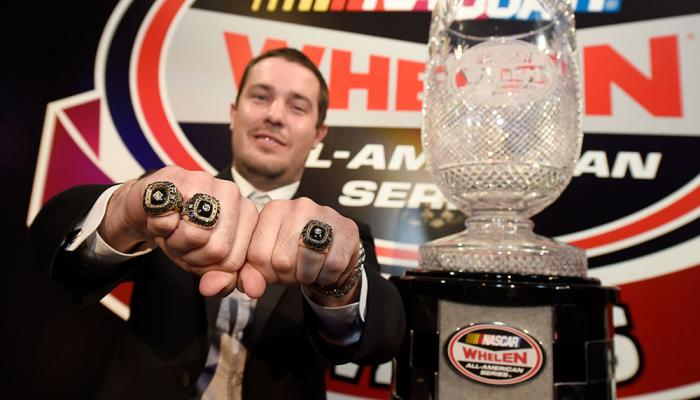 Doing it again is a rare accomplishment achieved by just three drivers. For Lee Pulliam, 2015 was another historic season.

For the third time in five years, the 27-year-old from Semora, North Carolina, took the stage in the Grand Ballroom at the Charlotte Convention Center / NASCAR Hall of Fame to accept the biggest award in short-track racing.

“As a kid I dreamed of this,” Pulliam said. “It wasn’t always easy. I’ve had plenty of struggles along the way getting to this point. But you know what they always told me: ‘Anything worth having is worth fighting for.’

“So what I’m telling you is I hope some little boy or girl with a dream just like me is watching this right now. You can achieve anything in life if you put your mind to it.”

Pulliam’s determination was on display throughout the southeast, as his asphalt Late Model was nearly unbeatable wherever he went. The No. 5 Kiker Tree Services Chevrolet ran 51 races at seven different tracks – winning at six of them – in four different states over a nine-month period. He racked up 29 wins, 46 top fives and 48 top 10s.

His win total is ninth all-time and marks the fourth year he’s won 20 races in a season.

“I wouldn’t be here without so many people being behind me,” Pulliam said. “My guys never give up. Whether it be turning wrenches on my car or working on our team cars, I couldn’t do it without each and every one of them.”

It’s fitting that Pulliam and Co. piled up the honors Friday night.

The state championship traces its lineage back to 1952 and past Virginia champions include NASCAR Hall of Famers Richie Evans, Ned Jarrett and Wendell Scott.

Champions across North America shared the stage with Pulliam Friday night. Fifty-seven Division I track champions, and 31 U.S. state and Canadian province champions along with state and province rookies of the year were also recognized for their 2015 achievements.

As a first-year NASCAR Whelen All-American Series Division I license holder, the 41-year-old from Wellston, Oklahoma, native also earned the national Rookie of the Year presented by Jostens. Tillison’s 15 wins, 25 top fives and 25 top 10s in 29 starts, won the track title at Salina and the Oklahoma championship.

Taylor Holdaway became the highest finishing Canadian driver in series history with his third-place. Driving an asphalt Late Model, Holdaway won his first track title at Sunset Speedway and the Ontario championship. The 24-year-old from Orillia, Ontario, had 12 wins, 21 top fives and 21 top 10s in 22 races.

The Whelen All-American Series Awards Banquet was streamed live online in English, Spanish and French on FansChoice.tv and simultaneously on NASCARHomeTracks.com.

Saturday night’s NASCAR Night of Champions Touring Awards will also be streamed live from the same location, in English, Spanish and French, starting with the pre-event Red Carpet Special at 5 p.m. ET with the awards ceremony getting underway at 6 p.m.