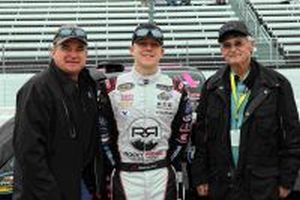 MOORESVILLE, N.C. (December 15, 2015)— Sid Mauldin, co-owner of the No. 8 Chevrolet for NEMCO Motorsports in the NASCAR Camping World Truck Series (NCWTS), passed away last night, December 14, from complications stemming from his courageous fight with gastric cancer. He was 61 years-old.

Mauldin was diagnosed in February 2013 and made his battle with Stage IV gastric cancer in public in an effort to inspire others also struggling with the emotional and physical strains of cancer. As a rancher and owner of SWM International Inc., Mauldin initially was reluctant to talk about his disease with his NASCAR friends and business associates. But more than two years later, he spoke openly about his cancer and his treatment.

He had been an in-and-out patient at The University of Texas MD Anderson Cancer Center in Houston since October 2013, with a typical stay lasting four days. The cancer had metastasized to his liver and lungs.

“Sid (Mauldin) was a great man,” NEMCO Motorsports co-owner Joe Nemechek said. “From meeting him the first time in the parking lot of the Bristol Motor Speedway to becoming a partner of ours in John Hunter’s racing career – it was all pretty phenomenal.

“He had a vision, and wanted to be involved in racing, and I cannot thank Sid and Dawna enough for helping getting John Hunter going. We will truly miss him.”

As requested by Dawna Mauldin, wife of Sid, the No. 8 NEMCO Motorsports Chevrolet Silverado driven by John Hunter Nemechek at the Texas Motor Speedway on November 6 featured on the deck lid No Stomach For Cancer, a nonprofit organization whose mission is to support research and unite the caring power of people worldwide affected by stomach cancer.

It is very safe to say that John Hunter Nemechek’s motorsports career would not have begun to bud at age 16 years-old without Mauldin’s involvement.

Likewise, Mauldin wouldn’t be co-owner of the No. 8 Chevrolet Silverado without John Hunter Nemechek, son of NASCAR veteran Joe Nemechek.

Mauldin’s business in NASCAR was rooted in the bonds of a deep mutual affection, and together they have put to life their respective dreams.

The family will hold a private memorial for Mauldin.