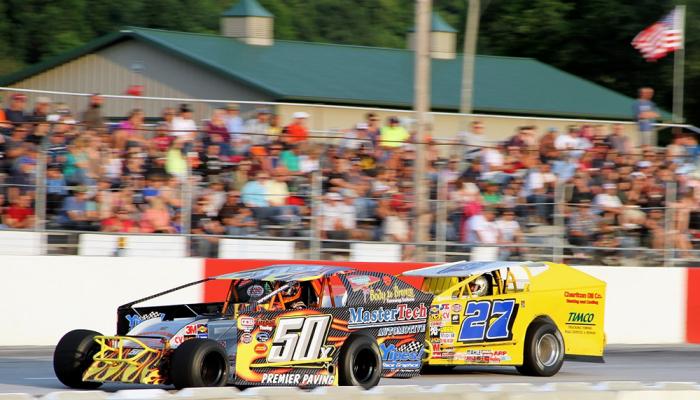 WEST HAVEN, Vt. – Devil’s Bowl Speedway will break new ground in its upcoming 50th season of stock car racing in 2016.  For the first time ever, the Vermont track will host weekly NASCAR-sanctioned events on both its half-mile asphalt oval and its .300-mile dirt track, operating both surfaces as part of the national NASCAR Whelen All-American Series.

The two-track sanction at Devil’s Bowl Speedway creates an interesting and unique opportunity for competitors.  Drivers in the two Division I classes – Bond Auto Parts Modifieds on asphalt and Sportsman Modifieds on dirt – will compete directly with each other for the NWAAS Vermont State Championship, and several drivers are expected to participate on both surfaces in pursuit of the titles.

Drivers in all four weekly Devil’s Bowl divisions will earn points toward NWAAS National Championships in Divisions I-IV.  The double sanction at Devil’s Bowl also means double the post-season awards, and as much as $40,000 in total point funds will be posted by NASCAR for drivers competing at Devil’s Bowl.

“Devil’s Bowl Speedway is in a unique position within the NASCAR Whelen All-American Series with having both an asphalt track and a dirt track at the same facility,” said Kevin Nevalainen, NASCAR director, weekly racing operations.  “Devil’s Bowl racers and fans have been great supporters of the NASCAR program, and we’re excited to be able to build on that in Vermont in 2016 and beyond.”

Devil’s Bowl Speedway promoter Mike Bruno said that he anticipates a handful of drivers in each division to compete on both surfaces in 2016.

“The two-track NASCAR sanction is exciting for everyone at Devil’s Bowl,” Bruno said.  “It’s rare these days for drivers to switch between surfaces, but I think we’ve created something special and exciting that the teams really want to be a part of.  It’s going to be very interesting to watch.”

Devil’s Bowl Speedway’s full 2016 season schedule will be finalized and announced soon, and is expected to offer a full slate of events on each track surface.