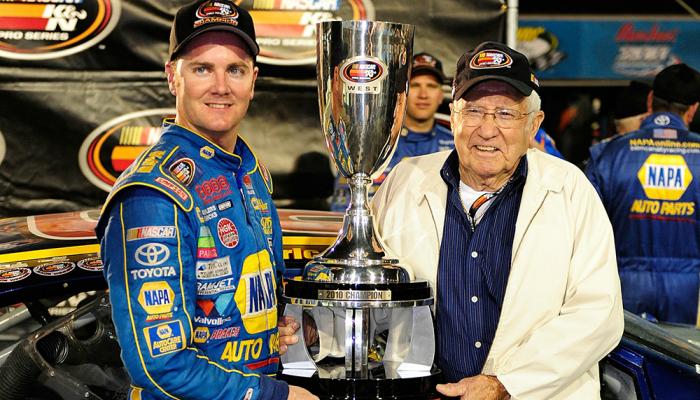 DAYTONA BEACH, Fla. — Lloyd Dane, NASCAR’s first three-time champion on the West Coast, has passed away. He was 90.

Dane won three of the first four championships held for the Pacific Coast Late Model championship, the forerunner to the NASCAR K&N Pro Series West. He was originally from Eldon, Missouri, before moving to Lakewood, California. He relocated to Charlotte, North Carolina, in recent years.

“Lloyd will always have a significant place in NASCAR history as one of our first champions,” said George Silbermann, NASCAR vice president, touring and weekly series. “He was well respected as a competitor and champion and will be missed. All of us at NASCAR would like to extend our thoughts and prayers to his family and friends.”

Dane also competed in 52 races over 11 years in NASCAR’s premier series, collecting five wins. He picked up victories in 1956 at California State Fairgrounds in Sacramento and Oregon’s Portland Speedway, in 1957 at California’s Eureka Speedway and 1961 at Riverside International Raceway in California.

Shortly after NASCAR expanded to the West and reorganized the California Stock Car Racing Association under the NASCAR banner, Dane won the inaugural champion. He out-distanced runner-up Danny Letner and Marvin Panch. After losing out on the title to Letner in 1955, Dane came back with a brand new 1956 Mercury and won the championship in 1956 and ’57.

He is one of seven drivers to win three or more championships in the 62 year history of the series.

“He started out on the rock bottom, where he didn’t have much money, and worked his way up,” said Ken Clapp, former NASCAR vice president and long-time friend of Dane’s. “It took him seven seasons to win his first race (in 1956). And then when he finally did win, he won 10 more times.

“He was a very clean driver — a Benny Parsons type of driver. He was very patient and realized you only had to lead one lap to win the race.

“He made a good champion and represented the sport well. When he became more established himself, he was never too busy to help a younger driver coming along.”

In 1964, Dane received the Naughton Award for Sportsmanship in NASCAR racing. He withdrew from a race at Sacramento, in October and loaned his car to Ron Hornaday Sr. This helped Hornaday to win his second straight win the Pacific Coast championship.

In 2010, his achievements were recognized as part of NASCAR’s Champions & Pioneers project. He took part in the championship presentation at Phoenix International Raceway that year as Eric Holmes clinched his third NASCAR K&N Pro Series West title.