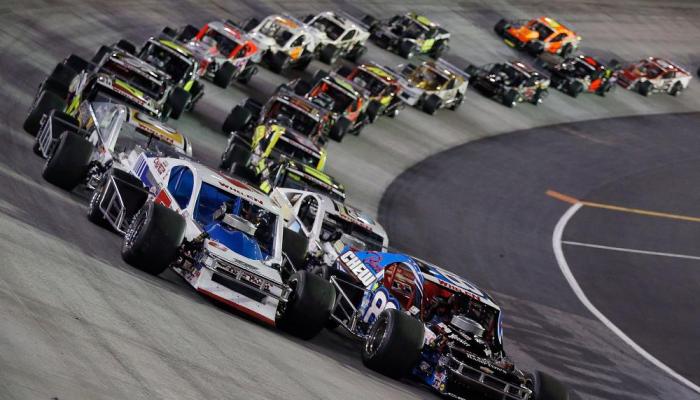 Upstate New York’s Oswego Speedway and Massachusetts’ Seekonk Speedway have returned to the Whelen Modified Tour schedule for the coming season, reuniting the northeast-based circuit with two venues that have played an integral part of the tour’s history. Likewise, North Carolina speedplant Concord Speedway has also rejoined the Whelen Southern Modified Tour calendar for next year while East Carolina Motor Speedway is a newcomer to the southern circuit.

The 32nd season for the Whelen Modified Tour will feature nine different facilities and 17 championship races, the most for the tour since 2005. Here is a breakdown of the 2016 calendar:

• Connecticut’s Thompson Speedway Motorsports Park will once again hold the season opening and season closing events as well as two midseason races. Each of Stafford Motor Speedway’s four traditional dates also return to the famed Nutmeg State oval.
• The Whelen Modified Tour will remain a fixture on the racing card for both New Hampshire Motor Speedway NASCAR national series weekends.
• The Whelen Modified and Whelen Southern Modified Tours will return to Bristol Motor Speedway for the eighth edition of the annual combination event during the popular August NASCAR race week.
• Long Island New York’s Riverhead Raceway once again will return with events while Monadnock Speedway and New London-Waterford Speedbowl will feature one race each.
• The late spring run of consecutive Connecticut events at New London-Waterford, Stafford and Thompson returns for the second year, but is spaced out over the course of a month this time around.
• Oswego, a .625-mile oval near the shore of Lake Ontario, contested four Whelen Modified Tour races in both 1988 and 1989. Seekonk, bordering Rhode Island and its capital city Providence, held its first Whelen Modified Tour race in 1987. The .333-mile oval welcomed the tour back for five races between 2000 and 2005.

The 12th season of Whelen Southern Modified Tour competition will feature 11 points races at seven different southeastern tracks. Here’s how the 2016 schedule shakes out for the southern tour:

• North Carolina’s Caraway Speedway will once again play host to the season opener. The venerable oval will have three subsequent dates, one more than a year ago.
• A champion will once again be crowned at Charlotte Motor Speedway, marking the seventh consecutive year the tour has visited the frontstretch quarter-mile at the legendary North Carolina facility.
• Virginia’s South Boston Speedway will return with two events while famed Bowman Gray Stadium has its traditional summer showcase.
• Concord, a high-speed, half-mile tri-oval located in the heart of North Carolina’s NASCAR industry, held one previous Whelen Southern Modified Tour event in 2009.
• East Carolina’s high banks are set to play host to the first Whelen Southern Modified Tour event in its history. The D-shaped, .375-mile oval is located in Robersonville, North Carolina.

The All-Star Shootout will also return for a third season as part of the July NASCAR race weekend at New Hampshire. The non-points event features champions, race winners and Sunoco Rookies of the Year from both the Whelen Modified and Whelen Southern Modified Tours.

Next year’s NASCAR Pinty’s Series schedule was released earlier this week by NASCAR while the 2016 NASCAR K&N Pro Series calendars are nearing completion. The 2016 television broadcast schedules for each of NASCAR’s regional touring series will be announced at a later date.

Statement from East Carolina Motor Speedway owner Wayne M. Perry:
“East Carolina Speedway is proud to have the opportunity to host the NASCAR Whelen Southern Modified Tour for the first time. We really enjoy being a part of the NASCAR Whelen All-American Series and this will be a great opportunity to bring a popular NASCAR Touring Series to our track for the fans. It’s going to be a great show.”

Statement from Concord Speedway race promoter Darren Hackett:
“We’re very happy to help get a race at Concord Speedway back on the NASCAR Whelen Southern Modified Tour schedule. We decided to take one of our races that we would have held at Caraway Speedway and move it there, and the competitors are excited to get to go back to an ultra-fast track.”

Statement from Oswego Speedway co-owner John Torresse:
“Budweiser International Classic Weekend is a staple event in open-wheel pavement racing and it should be treated as such. As we celebrate the 60th anniversary of this amazing racing weekend we felt the time was right to work together with NASCAR to bring back one of the traditions of this great weekend. A long distance, Saturday night special, featuring some of the best Modified drivers anywhere in the country – fighting for the distinguished right to be called a Classic champion at Oswego.”

Statement from Seekonk Speedway Director of Business Development Ed St Germain:
“Seekonk Speedway is excited to add another top flight open wheel race to its 2016 schedule. Our fans have spoken to us and we have listened. We strive to give our fans the best touring series and weekly racing that we can put on the track every Saturday night. We feel that the NASCAR Whelen Modified Tour embodies the best of open wheel racing that the country has to offer. We look forward to seeing the top notch drivers of the NWMT test their skills on the 1/3 mile bull ring at Seekonk.”