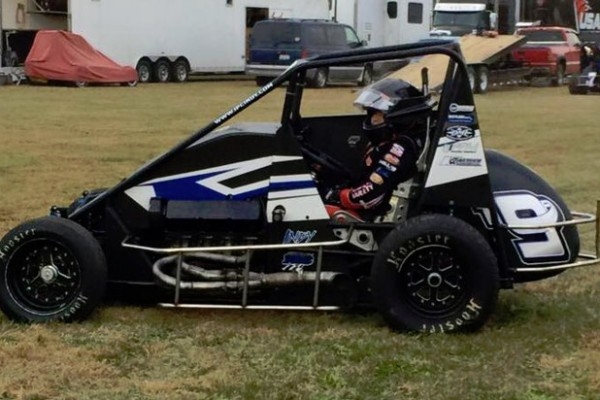 Alex was driving a PPM Titanium Products car owned by Scott & Kami Ronk at DuQuoin, with a very talented field of 60 drivers entered in the indoor event, including teammate Parker Price-Miller, and eventual winner Ricky Stenhouse, Jr. The night didn’t go according to plan for Alex though, as she was caught up in a tangle in her heat race and flipped wildly into the catchfence.

“Someone spun out and (on the restart) my wheel got caught over someone else’s wheel,” Alex explained. “After that we just scratched for the night.”

The crash caused frame damage on the car, but Alex and her team are working on securing more Midget racing opportunities and hope to announce something in the near future.

2016 DRIVER ROSTER
The team is pleased to have Cory Turner driving a 360 Sprint Car in 2016, while Jerry Hill and Shone Evans will compete in Crate Sprint Cars. Stay tuned in the new year for more information about the team’s 2016 plans and driver roster.

BECOME A HILL’S RACING TEAM INSIDER
E-mail tgoudgecommunications@gmail.com to get Hill’s Racing Team news delivered straight to your inbox. Got a question for one of the Hill’s Racing Team drivers? Just send us an e-mail and we’ll do the rest.