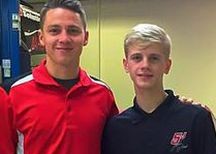 Jones will compete in two short track tests early in the 2016 season with MMM. After the tests, the team will evaluate his progress. If Jones and the team feel the tests went well, Jones could run all of the Calypso Lemonade Short Track races with the ARCA Racing Series for 2016.

“We feel blessed for this opportunity,” Jones said. “It comes to very few racers around the circuit and we know that. My whole family is excited to see me develop as a racer. They have devoted much of their time and hard earned dollars to get me to where I am now. I am excited to be working with MMM to develop not only as a driver but to develop good relationships within the ARCA series in the future.”

“We are working towards running the Short Track Challenge with the ARCA Racing Series, as well as some other test sessions. Once I have settled in I want to run as many races as I can and develop a strong relationship with MMM to compete for the overall ARCA series championship.”

“MMM consists of great people, they are welcoming and generous people. The strongest thing that I can see in them is confidence in me as well as my family and that is why I want to be involved with MMM for quite some time, and potentially move into bigger and better things with MMM.”

“This is a huge step in the right direction for MMM,” owner Mason Mitchell stated. “We want to develop the stars of tomorrow here in the ARCA Racing Series.”

“After the tests we will all work the evaluation process together. With Logan’s track record, I have no doubt we will see him compete in 2016.”

MMM has great opportunities available for the ARCA test in January as well as the 2016 season in the ARCA Racing Series and the NASCAR K&N Pro Series. Funded drivers can contact Mason Mitchell at mason@masonmitchellmotorsports.com

The ARCA Racing Series test at the Daytona International Speedway (DIS) is scheduled for January 15th and 16th in preparation for the opening event of the 2016 season at DIS on Saturday, February 13th.

Mason Mitchell Motorsports (masonmitchellmotorsports.com) is a championship driver development team fielding multiple entries in the ARCA Racing Series and the NASCAR K&N Pro Series for the 2016 season. The team is headquartered in Mooresville, North Carolina.