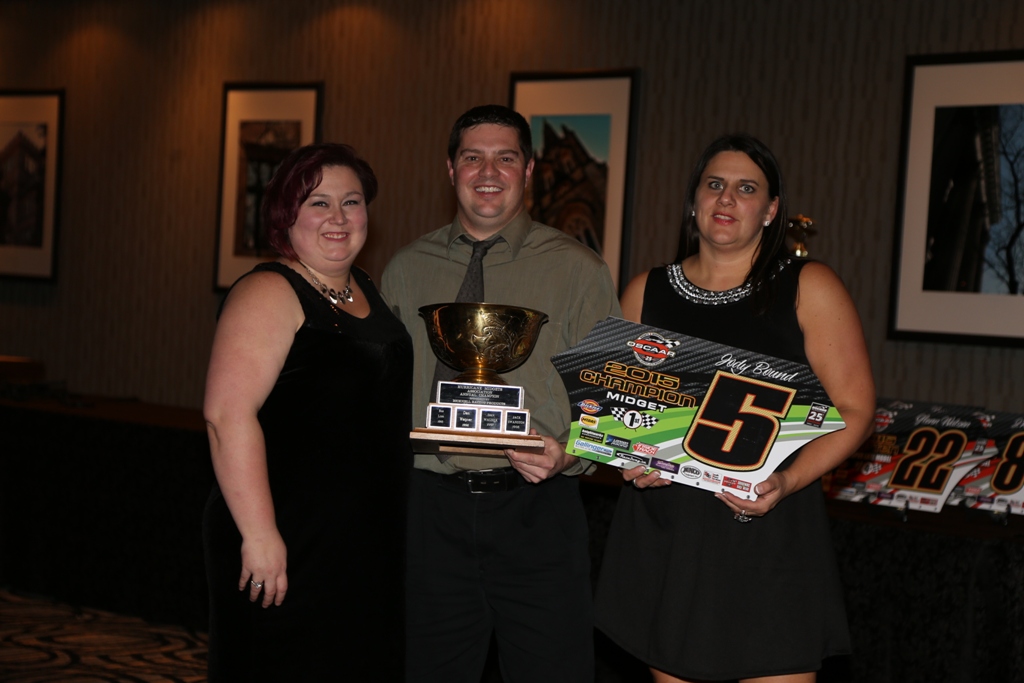 Following a successful season that finished with a rookie champion, the Midas of Orangeville OSCAAR Midget drivers celebrated their accomplishments on Saturday night at the year-end banquet.

With plenty of drivers in attendance, awards were handed out to some drivers, as well as a plaque for each of the drivers in the top-10.

Jody Bound proved right out of the box to start the season that he would be quick, completing the season with a pair of victories and nine top-10s en route to winning the 2015 Division Championship.

Beyond taking home the crown, Bound also picked up the award for best appearing car and rookie of the year.

“I just want to thank my crew – Larry and Brian,” Bound said. “(The other) two people that I have to thank that help me a lot behind the scenes and don’t get the accolades at the track, but they’re the true back bone of the No. 5 team. That’s Andrea Wilson and Brian’s wife Brenda, for letting me take Brian and Larry to the track with me. So all my sponsors – Midas of Orangeville, NTN bearings, Larry’s of Orangeville, Team K-OS, Interstate Batteries.

“We set our goals for rookie of the year and we did that with a little icing on the cake. Glad to be part of the OSCAAR organization with a great group of cars and a great bunch of people; it’s like a second family now.”

With a fourth place finish in points, three top-fives and nine top-10s on the year, Brian MacDonald picked up the Most Improved Driver award.

Robin McLean, who picked up a victory during the summer at Sunset Speedway with a late-race pass for the lead, was a clean racer throughout the summer. As a result, he awarded by his peers with the Sportsmen of the Year Award.

Raynor Vickers would pick up the inaugural Inside Track Hard Charger Award, which is given to the driver who advanced the most positions during the course of each feature race throughout the season. Vickers had a solid campaign, highlighted by a pair of top-10 finishes.

Lastly, Wally Wilson picked up the inaugural Ironman Award, which is given to the driver who made all of the races throughout the season, despite facing some difficult diversity along the way.

“The Ironman Award was for two things – one for making every race, and the guy who did something spectacular during the year that was a cut above everybody else,” Gary Elliott, the award’s creator, said. “It is for example, if you wrecked your car in the warm-ups and didn’t put it in the trailer and go home, or if you blew your motor in the warm-ups and didn’t give up on the night. That was to me something to me that showed someone who never gave up to the last second.”

Despite having a flip at Peterborough Speedway mid-season, Wilson did not give up as he attended each of the races throughout the season for a best finish of 11th at Grand Bend Speedway in August.

With a successful season behind them, all of the Midget drivers are looking towards the new season ahead, making plans already and putting together their cars. Despite the dynamics for OSCAAR changing in the year ahead, the commitment by OSCAAR’s officials and drivers remains the same.

“We’ve been around for 25 years, and we’ll be around for another 25 years,” series president Dave Gainforth said at the banquet. “There will be racing in 2016, in 2017 and the years after that.”

To see more photos from the banquet, check them out at https://www.facebook.com/ashleymccubbin.media/.