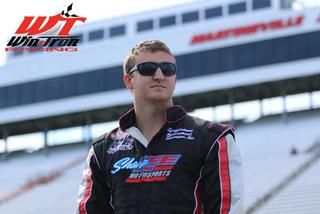 Lee has competed in the NASCAR Whelen All-American series for the past four seasons at tracks across the southeast picking up 18 wins while racing at historic tracks across the southeast including Hickory Motor Speedway, Myrtle Beach Speedway, and Greenville Pickens. Lee picked up two limited latemodel track championships at Hickory Motor Speedway in 2012 and 2013 along with the North Carolina rookie of the year in NASCAR Whelen All-American series in 2013.

Veteran crew chief Jamie Jones will oversee the Win-Tron Racing entries for Shane Lee. Jones, Lee, and the Win-Tron Racing team will kick off the 2016 racing season with the ARCA series test at Daytona International Speedway on January 15-16 in preparation for the season opening Lucas Oil 200 on February 13, 2016. Lee will make his NCWTS debut at Martinsville Speedway on April 2.

“This is the kind of opportunity I’ve been dreaming of,” said Shane Lee. “I felt like we finished off the 2015 season on a high note and really looking forward to 2016. It’s exciting to know we’re headed to Daytona (International Speedway) this weekend for the first test session of the year.”

“We’re excited to have the opportunity to work with Shane (Lee.) He is a welcome addition to our team, said Kevin Cywinski, owner of Win-Tron Racing. Shane and Jamie (Jones) will be able to work together throughout the season and having veteran around him like Jason White and being able to lean on Gray Gaulding will help Shane progress quickly.”

“Shane (Lee) has proven to provide the necessary skills to compete at the highest level both on and off the track” said Dwayne Gaulding, vice president of White Gaulding Partners. “Shane will continue to hone his driving skills throughout the 2016 season competing at various tracks in both ARCA and the NASCAR Camping World Truck series.”

About White Gaulding Partners: WGP is a full service marketing firm including athlete representation, entertainment marketing, and brand representation headquartered in Charlotte, North Carolina. Follow us on facebook.com/WGPPartners, Twitter and Instagram @WGPPartners, as well as WGPPartners.com

About Win-Tron Racing: Located in Mooresville, North Carolina, Win-Tron Racing is a professional race team headquartered in “Race City USA.” Owned by former racer Kevin Cywinski who have built a successful program in the ARCA Racing Series presented by Menards, as well as expanding to a full-time campaign in the NASCAR Camping World Truck Series starting in 2014. Learn more at WinTronRacing.com or on twitter @WinTronRacing