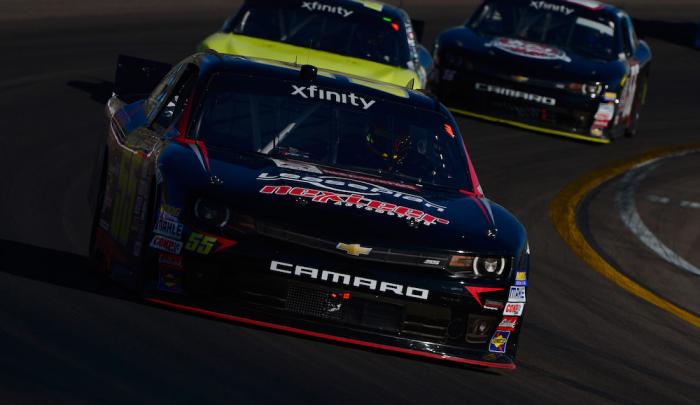 Since 2009, The Nascar Whelen Euro Series is the official gateway for European drivers to race in NASCAR in the USA. The Series’ development program “Nexteer Road to Daytona” is very successful, with already 20 drivers who competed in North America, and will reach another milestone on February 20, when 2014 NWES Champion Anthony Kumpen will make his Daytona International Speedway debut in the NASCAR XFINITY Series for the PowerShares QQQ 300.

The Belgian Champion will pilot the #46 LeasePlan Chevrolet Camaro and will be the first European driver to take part in a NASCAR XFINITY Series race at Daytona since Dario Franchitti in 2008. He will also be the first Belgian driver to take on the 2.5-mile oval since 1977, when Christine Beckers took part in the July NASCAR Sprint Cup Series race.

“We worked all year to get the approval to do Daytona and it is fantastic to finally be able to race there. To race at Daytona is a dream for every NASCAR driver out, it is a very special track and for a European NASCAR driver it is even more special. I’m proud and happy that we can be there,” said Kumpen. “It all started thanks to the NASCAR Whelen Euro Series and I am grateful for this. I want to thank everybody involved from sponsors to NASCAR. I am the first NWES driver to go to Daytona and I hope this will be an inspiration for young drivers to join the NASCAR Whelen Euro Series”

Thanks to the Nexteer Road To Daytona Program, the path to NASCAR in the US built by the NWES organization and Nexteer Automotive, Kumpen made his NASCAR XFINITY Series debut last August at Iowa Speedway, competing also in the last two race of the season in November at Phoenix International Raceway and Homestead Miami Speedway to gain the necessary experience before stepping up to the 2.5 miles of the Daytona International Speedway.

After Daytona, Kumpen will switch focus to his European campaign, looking to regain the NASCAR Whelen Euro Series title with his PK Carsport team, which will field once again two cars in the official European NASCAR Series. He also hopes to add more NASCAR XFINITY Series races to his summer program.

“We will field two cars again and we want to focus on the championship. In our first season we won all the titles, but in 2015 we didn’t get the results we expected. It is important to win the EuroNASCAR title also to receive the support to go to the US, so we want the title back,” said the 37-year-old from Hasselt, who ended up fourth in 2015 with one win at Raceway Venray and eight top-5. “We want to do more races in NASCAR XFINITY Series, but we are thinking about the road courses in the summer. First thing first, we want to start the European campaign in the best possible way.”

Other NASCAR Whelen Euro Series drivers will follow Kumpen’s path in the Nexteer Road To Daytona Program to race in the US during the Daytona Speedweeks and their programs will be unveiled in the upcoming weeks.

The PowerShares QQQ 300 will take place on Saturday, February 20, at 9:30 pm CET and will be broadcasted live on Fox Sports 1.