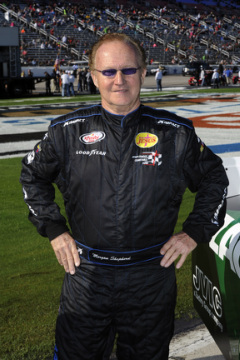 31 years before some of his NASCAR Xfinity Series competitors were born, Morgan Shepherd made his NASCAR debut.  49 years later, Morgan is still racing, using every bit of his vast experience to his advantage.  Whether on the track or building the cars he races, Morgan Shepherd was the ultimate “Active Senior” before the phrase had even been coined.

For the 2016 season, Morgan and his Shepherd Racing Ventures will be working with CM2, Commander Motorsports Marketing.  “For a small operation like ours to be able to work with an agency like CM2 makes me very optimistic about the 2016 season,” states Shepherd.

“I’m very excited to be working with Morgan,” says CM2 President Michael Boswell.  “Morgan has quite the legacy in NASCAR and we don’t think he’s done yet. Any organization trying to reach “Active Seniors” needs to consider having Morgan as their spokesperson.  CM2 is very pleased with the opportunity to work with Shepherd Racing Ventures.”

Shepherd began his NASCAR career in 1967.  Since that time, he has acrued 19 wins in NASCAR’s top two series.  He has driven for some legendary NASCAR owners including Bud Moore and the Wood Brothers.  At 74 years young, Morgan’s passion for racing hasn’t diminished.  “I feel like our team can offer sponsors a tremendous value.  CM2 really understands how to create effective marketing campaigns and promotions to help a sponsor maximize the return on their investment,” says Shepherd.

Shepherd Racing Ventures looks to start their 2016 season in the NASCAR Xfinity Series Saturday, February 20 at Daytona International Speedway in the PowerShares QQQ 300.  The race will be broadcast live on Fox Sports 1.