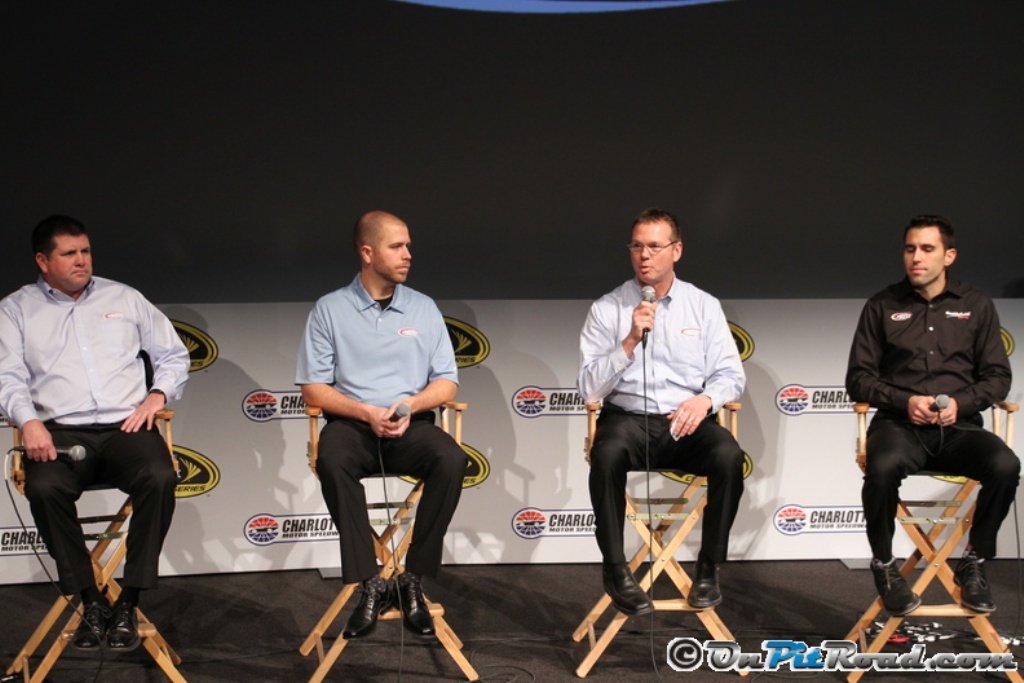 Ford Wednesday at the 2016 NASCAR Media Tour kicked off with the Richard Petty Motorsports contingent meeting with those in attendance at the NASCAR Hall of Fame Theatre. Brian Moffitt, Sammy Johns and drivers Aric Almirola and Brian Scott all gave their outlook on the upcoming season.

BRIAN MOFFITT, Chief Executive Officer, Richard Petty Motorsports – “I want to thank all of you for being here and covering this week. We always look forward to this time of year and getting to Daytona and getting things started. As Lance mentioned, 2015 was a year that the 9 needed some help in sponsorship and Richard and Andy provided that help for us and gave us the platform to give Sammy the right resources to make sure we are competing at the highest level. We are thrilled that by the end of ’15 we were able to renew every sponsor that we had with extensions. Smithfield was able to come on board for 31 races from 29 and they also extended the year and we have a multi-year deal again with Smithfield so they will continue to support us and our sport in a big way. We are thrilled to have them. We have US Airforce renewing with us and STP and Florida Agriculture Department back with us again. So we have a solid foundation for Aric to go out and win races and contend for the Chase. We look forward to it. As we mentioned in December, we are thrilled to have Brian (Scott) be a part of the organization now and we mentioned a couple weeks ago that we are bringing the 44 back to continue the Petty legacy. We are happy to have that on Brian’s car. We also renewed Twisted Tea, GoBowling.com and a longtime partner with Richard, Goody’s is actually going to be on the 44 car this year. We are thrilled to have them and Brian and to give Sammy the support and all the employees back at RPM the support they need to compete for wins and championships. We also have a new sponsor with Albertsons companies and Shore Lodge on board as a part of the 44 car moving forward. We are thrilled to have them. This whole platform we have at Richard Petty Motorsports gives us a real opportunity to lay a solid foundation to compete at the highest level. We look forward to Brian running for Rookie of the Year this year as well as competing for wins and getting in the Chase as well as Aric.”

SAMMY JOHNS, Director of Operations, Richard Petty Motorsports – “We went into 2015 really wanting to build a more consistent base with the 43 team and Aric and we set top-15 finishes as the goal and we had a board in my office that had an orange line on it and asked Aric to try to stay above it each week and he did a good job with that. We also wanted to make the Chase and we were very disappointed we didn’t make that but we got very close and are proud of the team and consistency they build. We are looking forward to 2016 with Trent and Aric and the additions we have made to the team this winter to move into a more consistent top-10 and top-5 and making the Chase and getting to victory lane where he belongs. We feel good about the things we have done this winter to be able to do that. With that, we are super excited to welcome Brian and bring the 44 team back and bring Chris Heroy on board. He has been a great fit with our organization and they are doing a good job building their team and look forward to winning Rookie of the Year with Brian next year. That would be our goal for 2016. With that, we took on last year in the manufacturing side hanging our own bodies and we felt that was a huge success for us to be able to help with that consistency on the track. We are looking forward to building on that this year and a better product and faster cars for the guys to work with. We are also taking on building our own chassis in 2016. It is a very exciting project for us and because of our great partners that we have mentioned we have been able to build this organization back to the Petty way of winning races and being a winning organization.”

ARIC ALMIROLA, driver, No. 43 Ford Fusion – “You guys have heard it already a lot but the consistency part of the thing is what we were missing in 2014. That was a good season for us and I was really proud to get my first win in the Sprint Cup series and to make the Chase was really exciting for our race team but we knew at the end of the year that our Achilles heel was the fact we would run really good one weekend and the next we wouldn’t and we wouldn’t know why. We would go back to the shop and look into it and go with similar setups and things like that but we couldn’t put our finger on why we would run good or run bad. That was our goal going into 2015, to be a lot more solid of a race team and show up to the race track knowing that we would compete in the top-15 every weekend. Like Sammy said, that was our goal going into the season and right off the bat we realized it was an attainable goal and we did a really good job of doing that. 2014 obviously was a successful year because we won and we made the Chase but in my personal opinion, 2015 was even more successful for us. We missed the Chase by like 11 points, which was nothing to hang our heads about. We were disappointed but we still felt like we accomplished a lot of things and we circled a couple of races that if we could have had back, we certainly felt capable of making the Chase. I have never been more excited about starting a year that I am this year with the additions that Sammy has made in the shop and personnel, the aero department and building our own chassis and those things and having Chris on board working with Trent. Trent has made additions to personnel on our team and I am just really excited. Everybody always says that at this time of year. Every driver that comes in here says how excited they are to start the season and everybody is going to win every race and win the championship before the season starts but I really do feel good about this year. The other thing I am excited about, talking to Lance before we came up here, since 2012 when I joined Richard Petty Motorsports, every partner we have had on our race car has stuck with us and most have grown their partnership with us, Smithfield being the biggest. I am proud of that and the support we get form the people at Ford and continuing that relationship with them and they continue to help us more and more with technical resources and those sort of things are the kind of things we need to do to keep building Richard Petty Mortorsports back to a winning race team. I am more excited than I have ever been, and I am not just saying that because it is media day.”

BRIAN SCOTT, driver, No. 44 Ford Fusion – “Thank you all for being here and joining us this morning. As Aric said, and I don’t want to let him down, every driver is going to tell you they are excited and I certainly am excited. Being a rookie and able to contend for Rookie of the Year and coming to an organization like Richard Petty Motorsports and seeing the involvement that Ford is putting into the team and that Sammy is doing building this team and recruit people like Chris Heroy to come work with Trent Owens is really great. I am super excited to have this opportunity with them. Petty, the organization, is so much about family legacy and Richard Petty and what the Petty family has done in this sport so it is really cool for me to bring the number 44 back and get to drive that to start continuing the legacy of that number and the Petty organization. I think it is really neat for me to have a legacy of a family with companies like Albertsons and Shore Lodge that are Idaho based and near and dear to my heart and my family and have that tie to a race team that also values family legacy. I am super excited to be able to continue to grow the portfolio of sponsors and what we are trying to do this year. To have Twisted Tea, GoBowling.com and Goody’s all on board is very special. I have been able to really be involved and at the shop ever since we announced this deal and I even got to drive a test at Homestead with these guys and drive some of their race cars and that just upped my enthusiasm and excitement to see these guys building chassis and hanging bodies and everything they are doing. To hear some of the aero members we have coming out and be a part of the Ford family and doing things with the other Ford drivers. Aric and I went and represented RPM in a little go-kart shootout and had a big team dinner. It is really exciting. There is just a great atmosphere. I guess that is what I am trying to capture here, how good the atmosphere and morale is and how good everybody in the companies all seem to be coming together. I couldn’t be more excited to have the opportunity to work with Aric. I have been pulled aside by numerous driver sin the garage that tell me how good of a teammate he is going to be for me and how much help he is and that gets me excited to work with him and be a part of this organization.