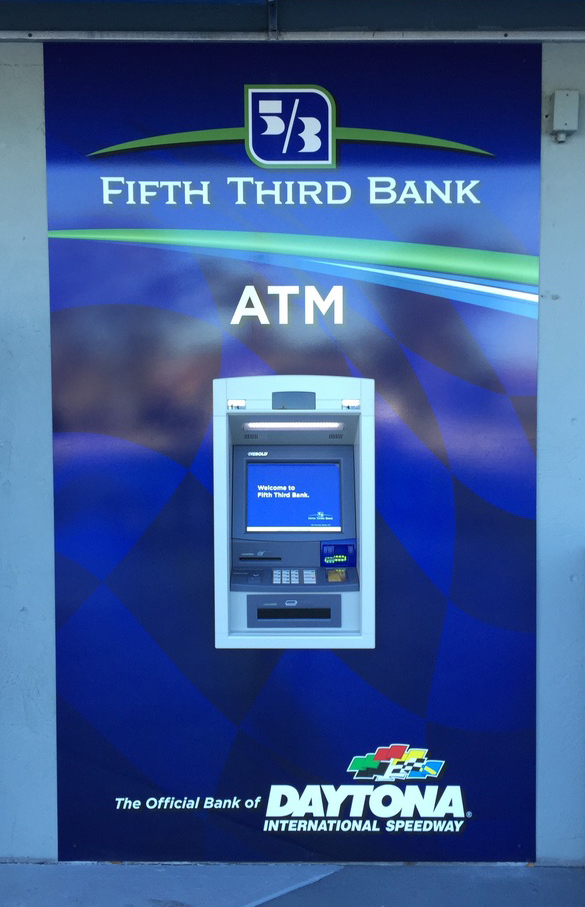 DAYTONA BEACH, Fla. – Daytona International Speedway announced the successful installment of Fifth Third Bank ATMs at the newly redeveloped Speedway this week. The seven ATMs have been strategically placed throughout the racing venue to accommodate the most fans. One ATM will be located in the tours building, and gates 2, 3 and 4 will each house two ATMs.

“We are excited to provide this added convenience for racing fans just in time for the upcoming Speedweeks,” said Brian Lamb, regional president of Fifth Third Bank (North Florida). “Daytona International Speedway is an American icon, and we are proud to be able to provide one of the many new features at this landmark racing venue.”

Last June, Fifth Third Bank signed on as the official bank of the “World Center of Racing” and as an official sponsor of the DAYTONA 500 and the Coke Zero 400 Powered By Coca-Cola. In addition to the ATM integration, the multi-year agreement provides Fifth Third Bank with fan engagement and corporate hospitality opportunities at the Speedway, as well as the ability to use Daytona International Speedway and its races’ marks and logos in Fifth Third Bank promotions.

“We are excited to have the Fifth Third Bank ATMs installed into the new motorsports stadium as we approach our first events later this month,” said Daytona International Speedway President Joie Chitwood III. “The DAYTONA Rising project is going to take the guest experience at the ‘World Center of Racing’ to new heights and has also proved to serve as a valuable marketing platform for our growing list of partners such as Fifth Third Bank.”

About Fifth Third Bank
Fifth Third Bancorp is a diversified financial services company headquartered in Cincinnati, Ohio. The Company has $142 billion in assets and operates 1,295 full-service Banking Centers, including 99 Bank Mart® locations, most open seven days a week, inside select grocery stores and 2,650 ATMs in Ohio, Kentucky, Indiana, Michigan, Illinois, Florida, Tennessee, West Virginia, Pennsylvania, Missouri, Georgia and North Carolina. Fifth Third operates four main businesses: Commercial Banking, Branch Banking, Consumer Lending, and Investment Advisors. Fifth Third is among the largest money managers in the Midwest and, as of September 30, 2015, had $297 billion in assets under care, of which it managed $25 billion for individuals, corporations and not-for-profit organizations. Investor information and press releases can be viewed at www.53.com. Fifth Third’s common stock is traded on the NASDAQ® Global Select Market under the symbol “FITB.” Fifth Third Bank was established in 1858. Member FDIC.

DAYTONA Rising is a $400 million reimagining of an American icon – Daytona International Speedway. Five expanded and redesigned entrances, or “injectors,” will lead fans to a series of escalators and elevators, transporting them to three different concourse levels. Each level features spacious social areas, or “neighborhoods,” along the nearly mile-long frontstretch. At the conclusion of the redevelopment, Daytona International Speedway will have approximately 101,500 permanent, wider and more comfortable seats, twice as many restrooms and three times as many concession stands. In addition, the Speedway will feature over 60 luxury suites with trackside views and a completely revamped hospitality experience for corporate guests. DAYTONA Rising: Reimagining an American Icon, expected to create 6,300 jobs, $300 million in labor income and over $85 million in tax revenue, will be completed in time for the 2016 Rolex 24 At Daytona and DAYTONA 500.

Race fans can follow the progress of the DAYTONA Rising project by visiting www.DAYTONARising.com and connecting with Daytona International Speedway on Twitter, Facebook, Pinterest, Instagram and YouTube. Also, fans can see the construction project up close by taking one of the daily tours available at the Speedway on non-event days throughout the year. Visit www.daytonainternationalspeedway.com/tours or the Speedway Ticket and Tours Building for more information. For tickets and more information on Daytona International Speedway events, visit www.daytonainternationalspeedway.com or call 1-800-PITSHOP.

Daytona International Speedway is the home of “The Great American Race” – the DAYTONA 500. Though the season-opening NASCAR Sprint Cup event garners most of the attention – as well as the largest audience in motorsports – the approximately 500-acre motorsports complex boasts the most diverse schedule of racing on the globe, thus earning it the title of “World Center of Racing.” In addition to eight major weekends of racing activity, the Speedway will host the inaugural Country 500 – The Great American Music Fest at DAYTONA over Memorial Day Weekend in 2016. Rarely a week goes by that the Speedway grounds are not used for events that include civic and social gatherings, car shows, photo shoots, production vehicle testing and police motorcycle training.