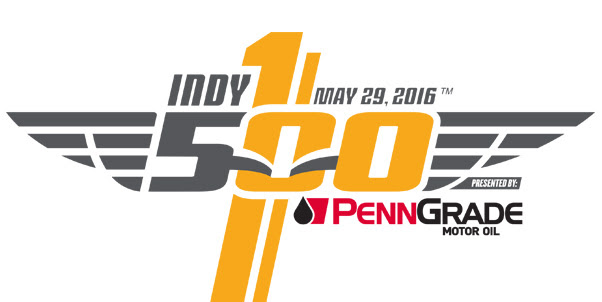 A brand of Lebanon, Ind.-based D-A Lubricant Company, PennGrade Motor Oil will serve as presenting sponsor through a multiyear deal running through 2018.

“This historic announcement is welcome news for the Indianapolis Motor Speedway and generates even more momentum for the entire Verizon IndyCar Series,” Hulman & Company CEO Mark Miles said. “PennGrade Motor Oil, with its deep understanding of the heritage and tradition that fuels the Indy 500, is the perfect presenting sponsor for the world’s greatest race.”

“We’re thrilled that PennGrade Motor Oil is joining us, not only for the 100th Running of the Indianapolis 500, but for more Indy 500s going forward,” Indianapolis Motor Speedway president Doug Boles said. “My grandmother worked for D-A Lubricant so I’m well-versed in the company’s history and I know our fans will appreciate the Hoosier connection as well.”

D-A Lubricant sponsored entries in the “500” from 1955-58, with a high finish of sixth in 1956 with driver Bob Sweikert. D-A-sponsored cars also ran in the USAC Championship series during that time, winning once in 1957 and four times in 1958. Last year, the company was a major associate sponsor of Graham Rahal’s Honda-Dallara in the Verizon IndyCar Series and will continue on as a team sponsor in the future.

The announcement came in Dallas with primary sponsor Gas Monkey Garage, which features its performance car builds on the Discovery Channel show “Fast N’ Loud.” Karam made his Verizon IndyCar Series debut as a 19-year-old high school senior in the 2014 Indianapolis 500 with Dreyer & Reinbold in association with Chip Ganassi Racing Teams, when he made a sensational drive from 31st starting position to finish ninth.

In 2015, Karam competed in 12 races for Chip Ganassi Racing Teams with a pair of top-five finishes on ovals (third at Iowa and fifth at Auto Club Speedway). Now he’s set to drive the No. 24 Gas Monkey Garage Special for Dreyer & Reinbold – Kingdom Racing.

“I’m really thrilled to be associated with Gas Monkey Garage for the 100th Indy 500,” said Karam, a native of Nazareth, Pa., who climbed through the Mazda Road to Indy ranks by winning the 2010 USF2000 and 2013 Indy Lights championships. “It’s exciting to return to the Dreyer & Reinbold – Kingdom team as well. We had a great run in 2014 at Indy.

“As a kid, Discovery Channel was one of my favorite stations and, most recently, I really got into the ‘Fast N’ Loud’ show with the Gas Monkey Garage guys,” he added. “I love cars and these guys are fun to watch, so I can’t wait to work with them and drive the Gas Monkey Special in May.”

Gas Monkey Garage has been a successful automotive brand and collector car restoration business since 2002. The Gas Monkey Garage brand is one of the world’s most visible within the automobile industry and will launch a new energy drink this year, using the Indianapolis 500 as a platform.

“We are extremely excited and proud to partner with Gas Monkey Garage,” said Dennis Reinbold, team principal of Dreyer & Reinbold Racing. “We’ve been working very hard since last year’s ‘500’ to build a strong commercial and competitive program for the 100th running. We believe Sage Karam is a very talented driver and we can’t wait for the month of May. The Gas Monkey Garage brand is known worldwide and bringing them to the Indianapolis 500 for the first time is a thrill.”

Richard Rawlings, who leads Gas Monkey Garage, is just as excited to experience Indianapolis Motor Speedway in the month of May.

“The Indy 500 is the biggest race in the world and our Gas Monkey Garage brand ties in very well with the team and legendary race,” Rawlings said. “We can’t wait to see the Gas Monkey Garage Special on the track at the Indianapolis Motor Speedway.”

INDYCAR will be in the thick of the auction and car show excitement on the brink of a historic 2016 Verizon IndyCar Series season that includes the legendary 100th Running of the Indianapolis 500 Mile Race and the return of Indy car racing to Phoenix International Raceway.

The most versatile racing series on the planet will be on display at three key events over the course of the week:

•    Six past Indianapolis 500 winners will conduct a roundtable discussion focused on May’s 100th running of the “Greatest Spectacle in Racing” Jan. 23 at the Arizona Concours d’Elegance celebration of vintage automobiles at the Arizona Biltmore Resort in Phoenix. In addition, a small fleet of Indy 500 race cars, ranging from a 1914 Duesenberg to the 2014 race-winning Honda/Dallara, will be on display at the Concours that runs Jan. 23-24.

•    That same Dallara, belonging to Andretti Autosport and driven to victory by Ryan Hunter-Reay in the 98th running, will be go to the highest bidder at the Gooding & Company auction Jan. 29-30 in Scottsdale, Ariz., with the stipulation that the buyer won’t take possession until after the car’s racing days are complete, likely following the 2018 Verizon IndyCar Series season.

•    A special new-generation 2016 Chevrolet Camaro SS coupe, the first off the production line with VIN No. 001, will be part of the Barrett-Jackson auction in Scottsdale on Jan. 30, with all proceeds benefitting Kettering University to provide opportunities for students in engineering, science, math and business. CFH Racing driver Josef Newgarden will take part in the charity auction festivities.

The facility will house a body shop and office space for its six drivers and 25 employees. An additional 30,000 square feet will be available for future expansion, and Juncos has future plans to do machining, painting and other work in-house, limiting the need for outsourcing. Completion is projected for summer or early fall 2016.

“The creation of the Juncos Technical Center (JTC) marks a historical turning point for the team,” said Ricardo Juncos, team principal and founder of Juncos Racing. “Less than 10 years ago, we were a small karting team in Florida, and I continue to be amazed by the amount of growth and success we have seen in such a short period of time.

“The team has grown larger and stronger each year, which created the need for a facility like the JTC. This new facility will allow Juncos to continue to expand into new series. It wouldn’t be possible without the incredible passion and desire of every member of Juncos Racing, and I am truly grateful for all of the hard work they put in to make this dream a reality.”

5. Of Note: Verizon IndyCar Series team owners Chip Ganassi and Bobby Rahal have been named as candidates for the 2015 Rolex Bob Snodgrass Award of Excellence, presented by Gorsline Company, based on their team’s sports car success during the 2015 race season. The award recipient will be chosen by a panel of motorsports professionals and announced on Jan. 29 during the Grand Marshal dinner at the Rolex 24 At Daytona. The 2015 honoree will be presented with a specially engraved Rolex Stainless Steel and Platinum Yacht-Master timepiece…Verizon IndyCar Series drivers Gabby Chaves, Conor Daly and James Hinchcliffe will participate in IMS Night with the Indy Fuel hockey team on Jan. 23… Jonathan Byrd’s Racing, which recently announced a partnership with Dale Coyne Racing that will bring Bryan Clauson to the Indianapolis 500 as the centerpiece of his “Chasing 200 Tour,” while also putting Conor Daly in a full-time IndyCar seat for the 2016 season, is pleased to announce a partnership with Vantage Hotels as the official lodging partner.