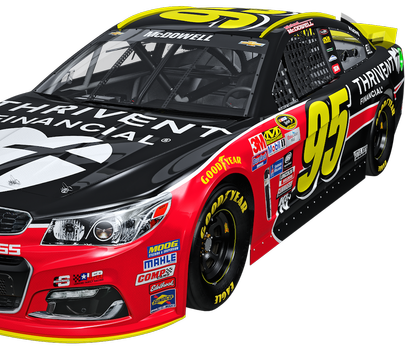 No. 95 Race Team Switches to Chevrolet with Support from Richard Childress Racing and ECR Engines

CONCORD, N.C. (January 21, 2016) – Leavine Family Racing (LFR) will join forces with Circle Sport Racing to run the full 36-race schedule in the 2016 NASCAR Sprint Cup Series (NSCS). In addition, the race team will enter into an alliance with Richard Childress Racing (RCR) and will make the switch to run Chevrolet SS race cars powered by ECR Engines this race season.

Veteran driver Michael McDowell, who is entering his third season driving for Leavine Family Racing, will be the primary driver and compete in at least 26 NSCS races in 2016. RCR driver Ty Dillon, who finished third in the 2015 NASCAR XFINITY Series Championship, will pilot the team’s entry for the remaining NSCS races.  Specific races for each driver are being determined but both drivers will enter the Daytona 500.

Leavine Family Racing team owner Bob Leavine has been preparing to take the team from a partial schedule to the full series schedule since the team’s inception.

The 2016 season proved to be the perfect time to make the leap, thanks in part to the new alliance with Joe Falk’s Circle Sport Racing team and technical alliance with Richard Childress Racing.

“The manufacturer and alliance switch provides our team with the best opportunity to improve on-track performance and to create long-term sustainability,” said Leavine. “This was the right time for us to make this change.  We have been turning over every stone looking for the right plan for our team and our people in 2016, and we’ve finally found a great fit that’s going to help us continue to grow both on the track and as an organization.”

Joe Falk, owner of Circle Sport Racing, had been an owner in NASCAR starting in the late 1990’s. Circle Sport competed in its first race in 2012 and has been associated with Richard Childress Racing during that time.

“I’m happy to be working with Bob (Leavine) and the team to combine our efforts for a successful 2016 and beyond,” said Falk.  “We’ve put together a top notch program obtaining all cars and engines from RCR.”

McDowell is entering his ninth season as a driver in the NASCAR Sprint Cup Series and is scheduled to make his 200th start in 2016.

“This is a big step for our competition program,” said McDowell.  “The technical alliance with Richard Childress Racing is a huge asset to our growing team and we’ll have access to some of the top equipment in the Cup Series.  This type of alliance has worked really well for single-car teams such as JTG Racing and Germain Racing in the past and I’m excited about what we’re going to be able to do in 2016.”

Primary sponsorship of the No. 95 Chevrolet SS will include Thrivent Financial, K-LOVE Radio and Cheerios Brand.  Circle Sport – Leavine Family Racing is seeking additional sponsorship to fill out the season.

Circle Sport – Leavine Family Racing will kick off their first full season in the NASCAR Sprint Cup Series with Daytona Speedweeks in February 2016.