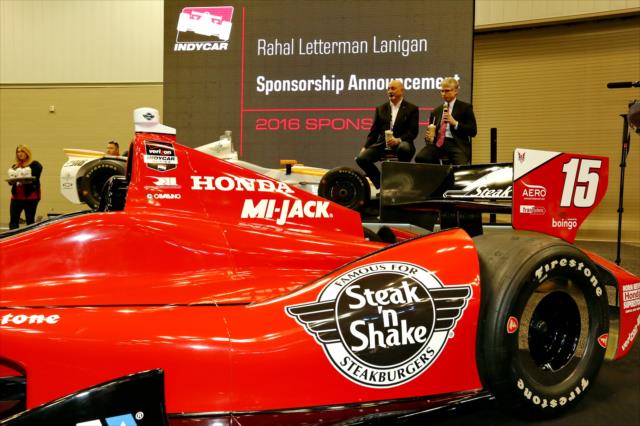 Several things have occurred within the last week that has ignited a little spark into what has been for the large part a kind of quiet silly season for the Verizon IndyCar Series looking ahead to the upcoming 2016 campaign. While most of the sport’s biggest names have stayed put, there is a lot of action going on to secure the last few remaining chairs for the full tour and for the 100th running of the Indianapolis 500, presented by PennGrade Motor Oil.

The two biggest shifts occurred when Sage Karam, who after being on a maybe-maybe not situation with Chip Ganassi Racing, agreed to an Indy 500 only deal with Kingdom/Dreyer-Reinbold Racing, the same team with which he made his initial IndyCar Series start in 2014. Also adding a little spice to the conversation was the revelation that former NASCAR Sprint Cup Series champion Kurt Busch is interested in taking another shot at claiming the Borg Warner Trophy. The older of the famed stock car racing brothers finished sixth for Andretti Autosport two years ago and could be even more competitive with now a full month of May experience under his belt. So with only a handful of seats remaining for both pursuits here is how things are shaping up.

Although Karam took the one-off shot at Kingdom-DRR, there is still perhaps a shot that he could split a fourth car with someone at Ganassi. Another candidate for that could again be Sebastian Saavedra, who maybe had his most productive IndyCar season in just a handful of starts. Also Saavedra has the backing of AFS Racing’s Gary Peterson, which if coupled with a little more cash could secure a spot on the grid for a majority of events, with another team if not for Ganassi. Keep an eye out also for former Formula One regular Max Chilton, who spent last season for Carlin Racing in Indy Lights. The British-based pilot is believed to be very well funded, maybe enough to merit Ganassi offering a fourth seat full time for him.

Expect a major bounce back from Andretti, if Honda produces a more competitive aero kit and engine as opposed to 2015. Munoz should be back despite a difficult 2015 tour that lacked high finishes. The team could offer a fourth or even fifth car for the Indy 500. Their full time driver in Formula E Simona de Silvestro is one candidate, as is the aforementioned Kurt Busch.

Josef Newgarden returns after winning the first two IndyCar Series races of his career. Team boss Ed Carpenter once again will focus solely on oval tracks in 2016, meaning a driver is needed for the road course rounds. Luca Filippi could perhaps return, while another option is Mike Conway if they can find a compromise between his commitments to Toyota Gazoo Racing in the FIA World Endurance Championship. Expect at least one extra entry for the month of May at Indianapolis, with J.R. Hildebrand the most likely driving choice. There is however, a bit of concern for the team’s future. Rumors are swirling that Wink Hartman, who has backed Sarah Fisher’s half of the team since their debut in 2009 may be out of the picture after this year.

This has suddenly become a tricky one. All signs pointed to an almost certain return to the Number 98 machine for 2015 IndyCar newcomer of the year Gabby Chaves. That has slightly changed over the past two weeks as 2015 Indy Lights runner-up Jack Harvey has claimed to be in talks with the Curb-Agajanian supported team. Considering this team appeared to be on the verge of shutting down operations during the previous offseason, the first impression is that the squad is not capable of expanding to two cars. There is an outside chance that the talks could also be in relation to an Indy 500 only effort for Harvey, as BHA reportedly had a deal set up for Jay Howard last year, only to have it break down last April due to needed funding not coming through. Stay tuned on this one friends.

The persistence of Conor Daly has paid off in the form of a full time ride for the 2016 IndyCar Series season with the Windy City-based runners. A second full time entry is likely with Jack Harvey and Sebastian Saavedra both mentioned as potential candidates. The team will add an additional two cars to its plate for the Indy 500. Coyne will support the Jonathan Byrd’s entry for USAC star Bryan Clauson, while Pippa Mann will return for her fourth effort with DCR in the Greatest Spectacle in Racing.

After enjoying their most productive season since 2005, the Ohio-based runners have much more security for this single full time effort for Graham Rahal. Sponsor Steak & Shake restaurants has increased its commitment in the team, while defending Indy Lights champion Spencer Pigot will join Rahal in the season opener at St. Petersburg, Florida and also for the two Indianapolis Motor Speedway events.

The ambitious largely female run and supported effort that was announced last May by former SRT Viper team manager Beth Paretta has continued their preparations for the 100th Indy 500. While the team they will align with for their first effort has yet to be revealed, their presence during the month of May is all but assured, baring unforeseen circumstances.