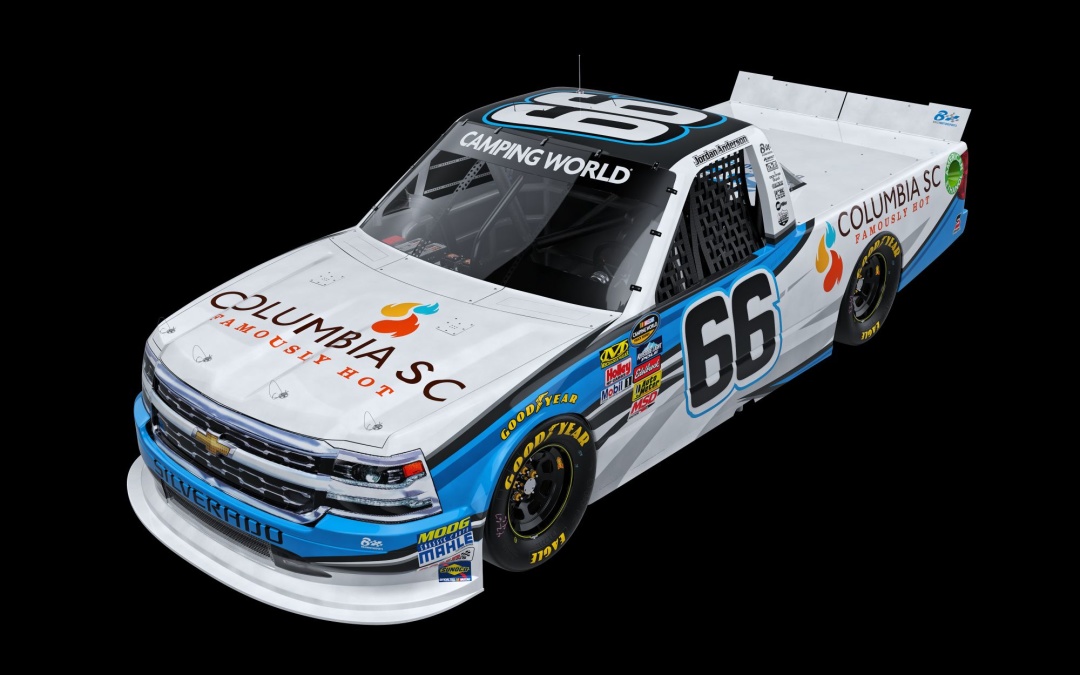 The announcement was made on Wednesday, Jan. 27 at the NASCAR Hall of Fame in Charlotte, NC.

Anderson’s approach to his career reflects the culture and hallmark traits of his hometown. Like Columbia, SC, Anderson has shown a tremendous amount of grit and determination to get to where he is today.

“Growing up as a kid in Columbia, my dream was to always compete in the upper ranks of NASCAR,” says Anderson. “From turning my first laps in a Go-Kart around my elementary school to working on my Dirt Late Model in my parents’ backyard – the reason I’ve had the opportunities to progress through the ranks from the dirt tracks to Daytona is thanks to the support of the people in Columbia and the everyday life lessons learned there.”

Unlike most racing teams who have a robust crew, Anderson’s team was made up of himself, a crew chief and one other person in 2015. He has procured his own sponsorships, managed his own public relations, worked on his truck and hauled it to and from races each week.

Last season saw no shortage of obstacles to overcome, from his trailer breaking down en route to Chicagoland Speedway to a last-minute opportunity to race in Canada which meant an expedited passport via Atlanta, a 17-hour solo drive to Canada and a lengthy delay at the border with customs. Nothing came easy for Anderson in 2015, but the hard work and personal perseverance made the season all the more rewarding.

“His story, coupled with his professional demeanor and Columbia being his hometown, really made us stop and consider the possibility of a partnership,” says Bill Ellen, president and CEO of the Midlands Authority for Conventions, Sports & Tourism, the umbrella organization for the CVB and Sports Council. “The more we talked with him and the more we came to understand the loyalty of his fans, the more we wanted to link forces.”

Kelly Barbrey, VP of sales and marketing for the Authority, agrees. “Jordan has an impressive number of engaged social media followers across the country. His fans, along with the NASCAR Camping World Truck Series fan base, overlap with our geographical target market. Partnering with Jordan and Bolen Motorsports allows us to capture a diverse and niche market of racing enthusiasts while championing our homegrown talent at the same time,” says Barbrey. “The truck and team’s racing suits will prominently feature our brand. He’s truly a moving billboard that intersects several of our key markets.”

Jordan’s determination garnered team owner Jeff Bolen’s attention several years ago. They had a common passion for the sport and both were raised in Columbia, a city that holds a special place in NASCAR history.

“We knew from the beginning that we had an opportunity to grow Columbia’s NASCAR legacy with Jordan,” says Bolen.

Their passion for Columbia happened to align perfectly with the CVB and Sports Council’s goals.

“The fact that we both call Columbia our hometown creates the perfect opportunity to promote the city and culture that we love. It is very humbling to have the support of the CVB and Sports Council,” remarks Bolen. “It allows all of us the ability to embark on a truly authentic and genuine partnership.”

Anderson agrees, “We want to help continue fostering the growth and development of local business in Columbia while giving residents and visitors an emotional connection to a sport that has such deep roots within the city.”

In addition, Ellen and Barbrey see several opportunities to collaborate with Bolen Motorsports and Anderson to help increase convention and sporting event business in Columbia.

“This is an industry based on relationships. People plan meetings and conventions with destination representatives that they know and trust. Many of our target planners live and work in the same geographic area as our leisure visitor, which happens to overlap with NASCAR country,” states Ellen.

“Entertaining potential and existing clients is a key component of our sales strategy. Now we’re able to do that at the track, giving the clients a new and memorable experience. Not to mention, the duration of the race gives us the time to have longer, more meaningful conversations than we would at say, an industry tradeshow.”

“This is more than a traditional sales and marketing campaign,” adds Barbrey. “You couldn’t dream up a more perfect fit between Jordan and our organization. Columbia is flourishing. New restaurants and shops are opening every month in districts throughout the region. This didn’t just happen. It was the result of coordinated and purposeful efforts by both the private and public sector. And, frankly, a lot of perseverance and hard work. That is Jordan’s career, too. He is smart, well-spoken and very business-savvy. He makes thoughtful, intentional decisions in both his sponsorship procurement and racing strategies. But make no mistake, he has the grit and tenacity to overcome hardships and achieve great success, which mirrors his hometown perfectly. We couldn’t be more proud to be a part of this with him.”

Bolen Motorsports is a professional race team competing in the NASCAR Camping World Truck Series. Team owner Jeff Bolen and driver Jordan Anderson, both Columbia, SC natives, founded the team on a friendship forged through racing with the goal of providing a competitive platform for partners looking to grow their national footprint.

About the Midlands Authority for Conventions, Sports & Tourism:

The Midlands Authority for Conventions, Sports & Tourism is a private, not-for-profit corporation funded primarily by revenue generated by visitors through accommodations taxes and is the parent organization of the Columbia Metropolitan Convention & Visitors Bureau, the Columbia Metropolitan Convention Center, and the Columbia Regional Sports Council. The mission of the Midlands Authority is to strengthen the area’s economy by marketing and selling Columbia, its accommodations, restaurants, facilities and attractions as a destination for meetings, conventions, tradeshows, special events and leisure travel. For more information, please visit columbiacvb.com.