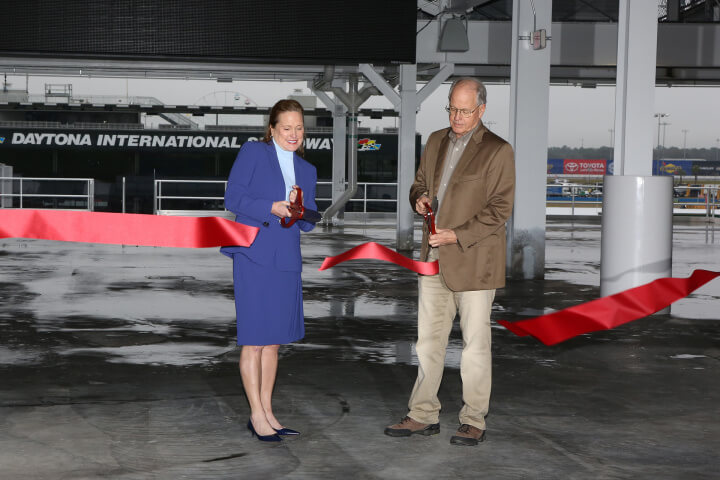 BY: REID SPENCER/NASCAR WIRE SERVICE —- DAYTONA BEACH, Fla. – As you walk toward the Turn 1 side of Daytona International Speedway, outside the track, you’ll see a slogan in huge letters on the back side of the new grandstand.

“Be Inspired,” reads the message on the “injector” sponsored by Florida Hospital.

That slogan, however, could apply to the entire $400-million capital project, aptly named “Daytona Rising,” that transformed the speedway into the first true motorsports stadium.

The re-imagining of Daytona, as International Speedway Corporation CEO Lesa France Kennedy likes to call it, traces its origins to an inspiration and a vision of what a motorsports facility could become. And with the project ready for fans who will flock to the Daytona 500 on Feb. 21 (1 p.m. ET on FOX), the new facility is certain to be an inspiration to those who use it as well as to executives at other race tracks who will be inspired by what Daytona has accomplished.

Kennedy and Jim France, vice chairman and executive vice president of NASCAR, officially opened the new facility in a ribbon-cutting ceremony on Wednesday afternoon, with track President Joie Chitwood III also holding court in the expansive new concourse that overlooks the start/finish line at the Birthplace of Speed.

“They tell me we’re on time and on budget,” Jim France said proudly after the ceremony. “I haven’t seen the finals yet, but I think we had an excellent team of folks within our company and some really great partners in the construction process, all the way through from the steelworkers — it didn’t matter who it was on the project. They were all first-class.”

France won’t miss the “old Daytona” because its spirit, the soul of Bill France Sr.’s original vision, remains. The new facility is simply an extension of that vision — and a massive one at that.

“We’ve still got the original layout of the track, and it’s been repaved recently, but it’s Daytona,” France said. “It’s our Super Bowl event (the Daytona 500)… and we truly now have a Super Bowl facility.”

The concourse is wide and spacious. On either side are bars where fans can congregate on terraces after a short walk from their seats. The injectors — the new term for the structures and routing that usher fans into the speedway — feature long escalators that bring fans from ground level to the concourse.

Up in the towers above the mile-long grandstand, the luxury suites will rival, if not put to shame, the prime hospitality areas in the most opulent of NFL Stadiums.

From the ceiling of the Rolex 24 Lounge hangs a large chandelier that features the shapes of every ISC race track in order of size, from .526-mile Martinsville at the bottom to 2.66-mile Talladega at the top.

What fans won’t see, but will certainly use, is the extensive availability of technology built into the transformed speedway. And now Chitwood and his staff at the speedway simply have to wait for fans to arrive en masse for Speedweeks.

“As exciting as it is today, it’s really challenging to let down and relax, because now all the fans are going to show up — for the Rolex 24 (this weekend) and the Daytona 500,” Chitwood said after the ribbon cutting. “Is our team ready? Have we done good training? Do all the credentials make sense? Do all the concession stands work?

“Can we respond to any incidents during the event? ‘Oh, no, the oven goes down.’ ‘Oh, no, there’s a leak.’ So, for me, it’s probably going to be Feb. 22 (the day after the Daytona 500) before I catch my breath. As exciting as it is to cut the ribbon today, now we have to make sure the fans really enjoy their experience.”

Toward that end, Chitwood has called on the full resources of ISC.

“We have the team mobilized,” he asserted. “I have every track president in the ISC system working during Speedweeks. I have other staff from other tracks here working for that event. I have every person in the corporate office working that weekend.

“We’re going to make sure we’re prepared to manage anything that comes up. No one can blame us for not having enough people on property to answer questions, see problems before they happen and just making sure that, if we can stop a misstep from happening, we will.”

Chitwood nevertheless took a moment to reflect on the project he help shepherd from a vision to a reality.

“Probably where I get the most exited or the most proud is that the France family entrusted me with their flagship property,” Chitwood said. “Being around Jim France and Lesa Kennedy and understanding what Big Bill did in the late ‘50s, and the legacy he created… one of the things we all talk about with our staff — we have to live up to that.

“This is Daytona International Speedway. Big Bill built this place. We are not going to misstep… and I’m proud to say, I think we nailed it. When I see Jim France walk around this property, and he’s smiling, and he’s excited, and Lesa’s excited, I think we lived up to that vision, and I’m just proud that they entrusted me with that job.

“As stressful and as tough as it was over two and a half years, these are the things that you want to be involved in if you’re in our sport… You want to be given a chance to do something impactful. I think the Daytona team had that chance, and they excelled.”